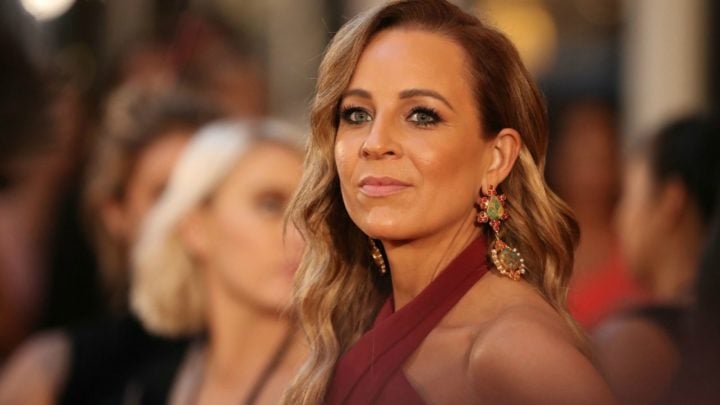 The Project's Carrie Bickmore says she wants her son to carry a mobile phone at all times. Source: Getty

Parents are often slammed for giving their children phones at a young age, but The Project’s Carrie Bickmore has revealed she regrets not equipping her 11-year-old son with a mobile phone sooner after an incident last week left her terrified.

Opening up on Tuesday’s episode of the Channel 10 program, the mother-of-three revealed her eldest child, Ollie, didn’t come home from school on Friday, adding she couldn’t check to see if everything was okay because he didn’t have a phone.

“I made Ollie walk to school, even though I was so scared he was going to get hit by a car,” she told her co-hosts, according to the Daily Mail.

“Everyone says, ‘Don’t give them a phone too soon, don’t let them on social media’, and then he didn’t come home from school.

“I went into an absolute trepidation and was like, ‘Why haven’t I given him a phone? I can’t work out where he is’.”

Thought I’d come see the Queen so I can thank her for my award in person. Waiting…waiting…oh I have just been told the Queen actually has nothing to do with OAM’s even though they are awarded on her birthday. 🤷‍♀️ as you were

Carrie, however, reassured viewers at home that the bus taking Ollie back to school had simply broken down, resulting in his tardiness.

“All that had happened was that the bus had broken down that was bringing them… back from sports practice [to school],” she explained.

The television presenter added she now wants her son to carry a mobile phone at all times, saying: “And [at] that moment, I vowed that I was going to know where he was at all times.”

While Carrie’s fears may be well founded, there’s no denying that children are growing up in a very different world to the one Baby Boomers did and alarming research, released late last year, revealed just how entrenched modern technology is in the lives of today’s kids.

The survey of 2,005 parents found the main reasons they gave their children a phone at such a young age was because they had a spare device handy (20 per cent), needing to contact their child throughout the day (20 per cent) and for when they child is travelling to and from school by themselves (19 per cent).

What are your thoughts? How young is too young to own a mobile phone? How old were your own children and grandchildren when they received their first mobile phone?