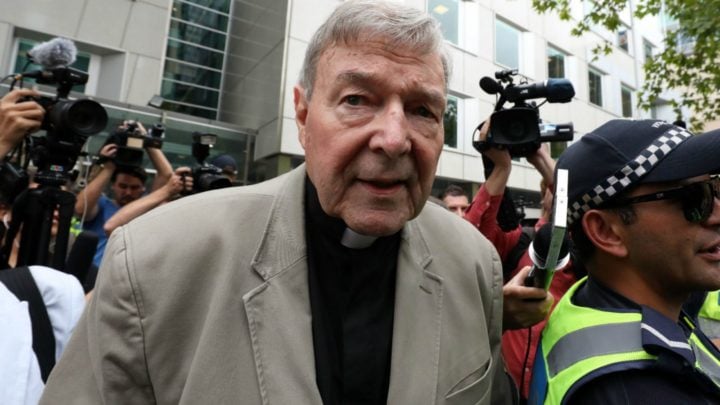 The letter, which was shared on Twitter on Friday, was allegedly penned by Cardinal George Pell from behind bars. Source: Getty.

It has been almost five months since Cardinal George Pell was sentenced to six years in prison, having been found guilty of the sexual abuse of two teenage choirboys during the 1990s. The former Archbishop of Melbourne is currently awaiting the outcome of his appeal, which was heard more than two months ago.

Now prison authorities are investigating whether Pell has committed a further offence after a letter emerged on social media, allegedly penned by the incarcerated senior Catholic from inside the Melbourne Assessment Prison and shared by the ‘Cardinal George Pell Supporters’ account.

The letter, signed “Your grateful brother”, was shared on Twitter on Friday and has since attracted comments from both those who support Pell and those who believe he was rightfully convicted.

“My faith in our Lord, like yours, is a source of strength,” the letter reads. “The knowledge that my small suffering can be used for good purposes through being joined to Jesus’ suffering gives me purpose and direction.

“Challenges and problems in Church life should be confronted in a similar spirit of faith.”

While it is not an offence for prisoners to send or receive mail, the Department of Justice and Community Safety confirmed they are investigating whether Pell did indeed write the letter and commission someone else to share it on his behalf.

A department spokesperson said: “Prisoners are denied any access to the internet or social media. It is a prison offence to commission other individuals to post something on social media on behalf of a prisoner.

“The Department of Justice and Community Safety will thoroughly investigate this social media activity. Any prisoner found to be contravening prison regulations faces disciplinary action.”

Before announcing the sentence, Kidd said he would “impose a shorter non-parole period than I otherwise would have been inclined to impose, in recognition in particular of your age, so as to increase the prospect of your living out the last part of your life in the community”.

He added: “I am conscious that the term of imprisonment, which I am about to impose upon you, carries with it a real, as distinct from theoretical, possibility that you may not live to be released from prison,” he said in court.

“Facing jail at your age in these circumstances must be an awful state of affairs for you. You are clearly someone with some significant health issues.”