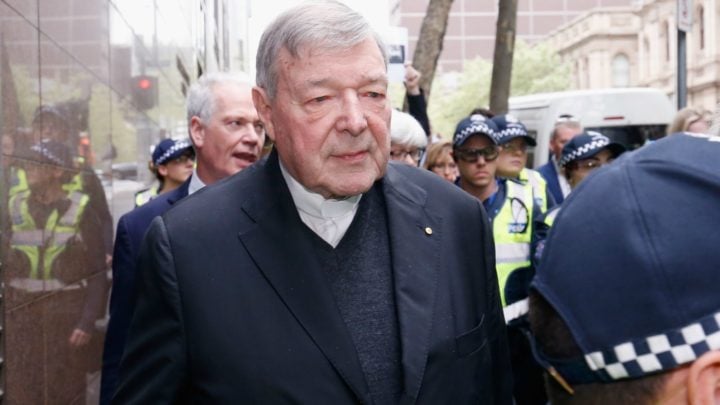 Pell is set to be released from Barwon prison later today. Source: Getty.

The High Court of Australia has quashed Cardinal George Pell’s convictions for child sexual abuse, meaning that the 78-year-old will walk free from Barwon Prison, near Geelong, today.

The unanimous decision was handed down by the country’s highest court on Tuesday morning, with the judgement summary also shared publicly on social media. Chief Justice Susan Kiefel delivered the ruling in Brisbane to an almost-empty room, due to strict social distancing guidelines.

“Today, the High Court granted special leave to appeal against a decision of the Court of Appeal of the Supreme Court of Victoria and unanimously allowed the appeal,” the judgement in Pell v The Queen reads.

“The High Court found that the jury, acting rationally on the whole of the evidence, ought to have entertained a doubt as to the applicant’s guilt with respect to each of the offences for which he was convicted, and ordered that the convictions be quashed and that verdicts of acquittal be entered in their place.”

Judgment has been delivered in Pell v The Queen https://t.co/TzjVX0RLXh

The judgement concluded: “With respect to each of the applicant’s convictions, there was … ‘a significant possibility that an innocent person has been convicted because the evidence did not establish guilt to the requisite standard of proof’.”

“The point was whether I had committed these awful crimes, and I did not,” he added. “The only basis for long term healing is truth and the only basis for justice is truth, because justice means truth for all.”

The High Court granted Pell special leave to appeal against his convictions in November last year, which is required in Australian law to initiate appeal proceedings against the decision of a lower court.

In December 2018, Pell was convicted of one charge of sexual penetration of a child under 16 years and four charges of committing an act of indecency with or in the presence of a child under the age of 16 years.

Pell was sentenced to six-years in prison, with a non-parole period of three years and eight months. However the former Archbishop of Melbourne maintained his innocence throughout the legal proceedings.

Today’s appeal was Pell’s second against his convictions. Last year, the Victorian Court of Appeal ruled with a 2-1 majority that the County Court jury had been within its rights to convict Pell of five sexual assault charges.