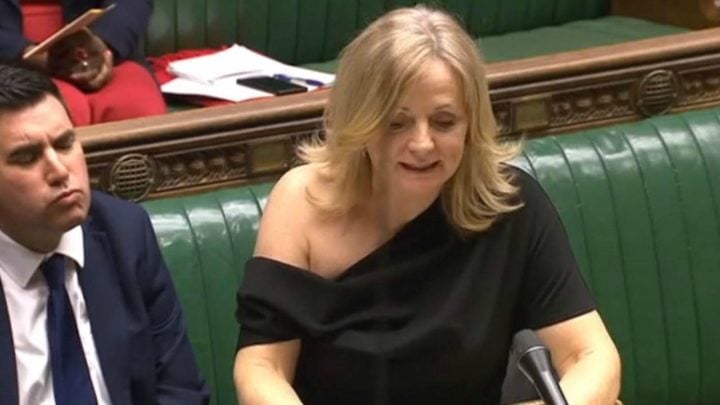 Tracy Brabin represents the electorate of Batley and Spen in Yorkshire in the UK. Source: Getty.

A British politician whose outfit choice prompted criticism online has hit back saying she’s not a “tart”.

The tongue-in-cheek response from Tracy Brabin, a Labor MP who represents the electorate of Batley and Spen in Yorkshire in the UK, came after a Twitter user shared a photograph of her wearing an off-the-shoulder dress to parliament and asked: “Is this really appropriate attire for parliament?”

“Have some respect woman,” @CandyNimrod wrote. “You are a public servant, not an actress on a lookout for some rogering. Wear the right clothes for the job.”

While @PaulSovrano commented: “Looks like she’s on the morning after walk of shame.”

Others defended the pollie with @georgiarcox writing: “It’s a shoulder. Get over it.”

While @KimberlyW1983 pointed out: “Are people forgetting how Boris Johnson rocks up every day? Permanently scruffy! But I guess that’s okay.”

Proving she’s not one to let the critics get the best of her, Brabin, who is best known for her appearances on soap operas such as Coronation Street and Eastenders, shared the post, saying she was surprised people could get so emotional over a shoulder.

“Hello,” she said. “Sorry I don’t have time to reply to all of you commenting on this but I can confirm I’m not … A slag. Hungover. A tart. About to breastfeed. A slapper. Drunk. Just been banged over a wheelie bin. Who knew people could get so emotional over a shoulder.”

Brabin also told the BBC: “They are idiots and they are rude but I am not going to lose much sleep over them. It’s important I don’t let other women down.”

She was immediately inundated with support from other social media users.

@redsarah99 wrote: “People are fine with poverty, but upset over your shoulder? What a strange country we live in. Lots of love lovely, ignore the awful people.”

While @ShaneJeetoo commented: “To be honest it’s quite nice to see an MP bringing some style into the HoC. Keep it up @TracyBrabin.”

A third, @RealGaryWebster wrote: “Brilliant retort Tracy. Omg if only they were as vocal about the behaviour, misogyny, racism, falling asleep and warped policies of the ruling govt as they are about revealing one shoulder.”

What are your thoughts on this? Do you think her dress is inappropriate?