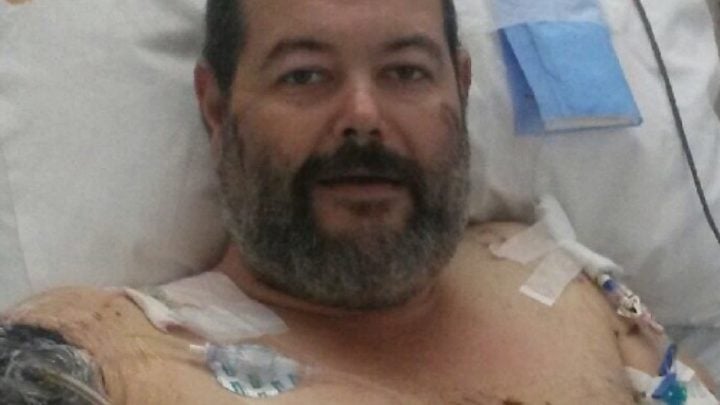 Brendan Clark was attacked while working in a regional town in NSW. Source: GoFundMe

A man who lost his arm after being viciously attacked by two dogs while working in regional New South Wales has recalled the moment he knew he had to fight for his life.

Brendan Clark, 43, was going about his business on a Coonamble property about 530km north-west of Sydney when he was set upon by the large canines, described as “pig-hunting mongrels”.

Speaking to the Newcastle Herald about the traumatic experience, Clark said they quickly launched at him, pushing him to the ground and latching on to his arm and his face.

The brave man explained how he gripped onto one of the dogs by the collar to try and keep it away, but they continued to bite at his body as Clark buried his face in the ground to protect himself.

“He started chewing on my arm and I thought ‘you can have my arm, but you’re not having my throat’,” he told the Newcastle Herald.

“I buried by face in the dirt and pushed my throat down to try to stop them from getting to my vitals. It was instinct.”

Clark thankfully survived the attack however, it has been a tough battle to recovery, with skin from his legs taken to try to repair his injured left arm while his right had to be removed due to the extensive damage.

He is also on antibiotics with fears he could have contracted a deadly infection from the dogs, who were put down following the attack.

Hoping to ease the burden, Clark’s friend James Everitt has set up a GoFundMe page in hopes of raising funds to help with medical bills.

“Raising money for a dear friend who has recently fallen on some very tough times,” Everitt wrote on the page.

“Always willing to help somebody out and put himself last. And on this particular day while he was doing just that, what he loves to do and that’s fix cars, a talented and skilled mechanic going about his work in a driveway of a customer, he was set upon by two very unwelcome dogs and as you can see he came off very second best. The fight put up must have been horendous [sic] to say the least.”

Read more: Dog attack: Baby girl ‘in serious condition after being bitten on face by pet’

He added: “I can only put this out there because I know for a fact he would do the same for anyone. Brendan we love you mate and we want to see you bounce back to happiness mate. The bills are going to be extreme, let alone doing everything left handed for a long time so lets donate to a wonderful human being and top mate.”