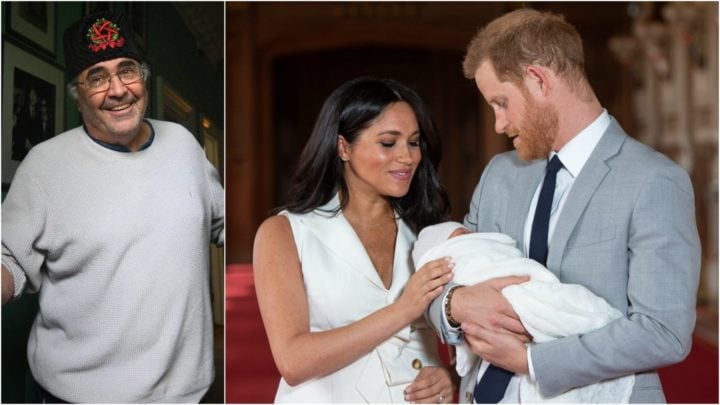 The comedian and journalist was accused of mocking the Duchess of Sussex's racial heritage with the image. Source: Getty.

A BBC presenter has been sacked by the public broadcaster after he shared a photograph of a chimpanzee holding hands with a man and a woman, allegedly comparing it to the birth of Prince Harry and Meghan’s new baby son Archie Harrison Mountbatten-Windsor.

Danny Baker, who presented a Saturday morning radio show on the BBC’s 5 Live station, was accused of being racist earlier this week after he shared the ill-advised post on social media, following the announcement that Meghan had delivered a healthy baby boy.

The comedian and journalist was accused of mocking the Duchess of Sussex’s racial heritage with the image, which was captioned: “Royal Baby leaves hospital.”

Baker, who apologised almost immediately after sharing the post and removed it from his account, insisted any offence had not been intentional.

He said: “Sorry my gag pic of the little fella in the posh outfit has whipped some up. Never occurred to me because, well, mind not diseased.

“Soon as those good enough to point out its possible connotations got in touch, down it came. And that’s it. Now stand by for sweary football tweets.”

However, following days of debate over the issue in the British media, the 61-year-old confirmed he had been given the boot in another post on Twitter on Thursday, in which he said: “Just got fired from @bbc5live.”

According to the reports by the BBC, Baker’s tweet “goes against their values”, with the station releasing a statement which read: “Danny’s a brilliant broadcaster but will no longer be presenting a weekly show with us.”

Baker’s firing has divided people online with many insisting that he must have been aware of the racial implications of sharing the image, while others defended the entertainer claiming it was not intentional and pointing out his swift apology.

One person wrote on Twitter: “GOOD the BBC does NOT need Racists like you on it’s Airwaves.! (sic) HURRAH to the BBC! for making the right decision at the RIGHT time…FOR ONCE.”

Another said: “Danny Baker is an intelligent, articulate, quick thinking man. There is no way he couldn’t have realised what he tweeted was racist.”

While a third wrote: “The hypocrisy of the BBC, who regularly platform racists, is what upsets me as much as the stupid tweet.”

Jono Coleman also waded into the debate on Studio 10 and spoke in defence of Baker, telling his fellow panellists: “He’s renowned for making jokes about chimps and monkeys. Anything to do with posh people and the royal family, he makes good-natured jokes about.

“Danny Baker doesn’t have a racist bone in his body. He actually took it [the tweet] down straight away when he realised people were taking it the wrong way.”

But Joe Hildebrand disagreed, saying: “He must have known it would be a suicide note, you would have to be absolutely insane to post that.”

What are your thoughts on this story? Do you think it’s right that he has been sacked?