Balls to that! Valentine’s macarons go viral for the wrong reason 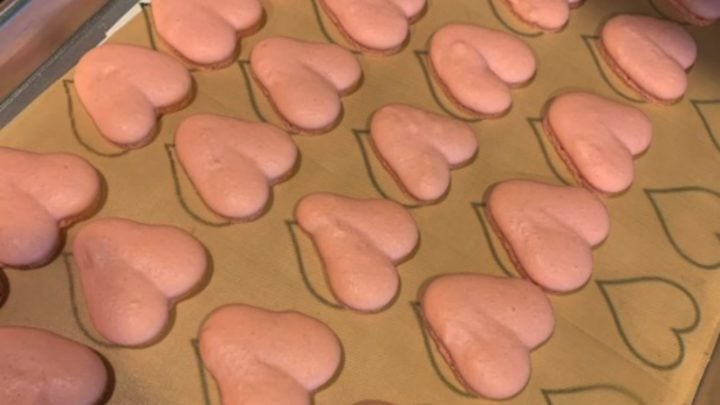 The baker shared her baking fail on Twitter in a post that has since gone viral. Source: Emma Plummer/Twitter

We’ve all had our fair share of cooking fails, but one self-taught baker from the United States takes the cake for funniest baking fail ever.

Emma Plummer has made headlines around the world after her attempt at making heart-shaped macarons went hilariously wrong. She was baking the sweet treats in preparation for Valentine’s Day, but her designs ended up looking like something else.

“I had my batter and I was following the template but I didn’t really know what I was doing,” Emma told BuzzFeed News. “I was like, wow these are not looking that great.”

With their skin-coloured appearance, the 23-year-old thought the macarons actually looked more like male genitalia than the innocent heart-shaped treats she’s intended. Emma posted a photo of her hilarious baking efforts on Twitter, with the caption: “I tried to make hearts and they turned out like ballsacks.”

The tweet received a flurry of likes and comments, with fellow tweeters sharing details of their own cooking stuff-ups.

“Completes my croissant,” @mariahjcoburn wrote, alongside a rather funny photo of a croissant.

🤣 Amazing! ‘A’ for effort. Don’t worry, I failed spectacularly in my attempt to make cinnamon elephant ears… #festiveflaps pic.twitter.com/EhtKr7qXO4

Others suggested she make them again for hens parties while some thought the blunder wasn’t that bad.

“I would still buy these for Valentine’s Day,”@maddymay3495 wrote. @FlertDevious added: “They’ll go great with tea.”

Another tweeter thought the macarons looked like something else entirely. “They also make pretty looking bums of ladies sitting,” @KiwiWhero wrote.

It’s not the first time an X-rated word or image has been misinterpreted in a cake masterpiece. In 2018, a bakery from Minnesota in the US made headlines around the world when a photo of one of its quirky creations was shared on Facebook.

Nadia Cakes uploaded a photograph of a pink cake to its Facebook page that was known as a geode rock cake and meant to look like a geode rock. With its pink appearance though, many thought the cake actually looked more like female genitalia than rocks.

Instead of becoming a PR nightmare, the bakery got in on the joke, posting an array of sassy responses to the thousands of people who joked about the cake’s controversial appearance.

Have you made a hilarious baking blunder before?