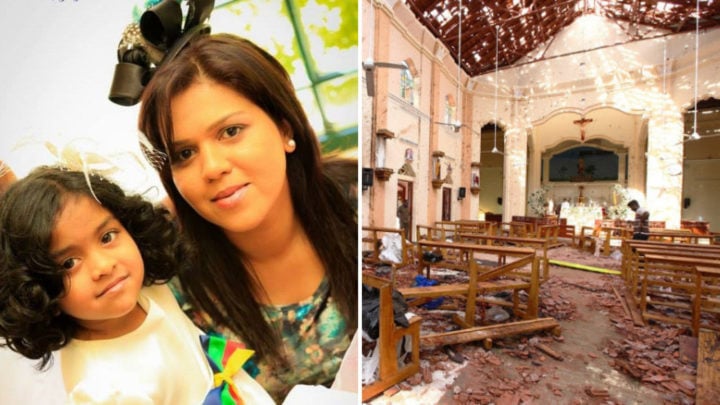 The two Australian citizens killed in the deadly Sri Lankan attacks have been confirmed as a mother and her 10-year-old daughter.

7 News identified the victims as Manik Suriaaratchi and her daughter Alexendria and reported the pair returned to Sri Lanka several years ago to care for another family member. Manik’s husband was parking the car at the time of the explosion and escaped without injury.

Friends and family of the victims attended a vigil in Melbourne’s Federation Square and told media the mother and daughter were killed when a bomb exploded in the church they were visiting. Manik was described as a “successful business owner” who had offices around the globe. It has been confirmed that 290 people have now been killed in the attacks and around 500 more injured.

The PM also confirmed other Australians had been caught up in the attacks.

“I can also confirm two other Australian citizens were injured in the attacks,” he added. “They have received medical treatment for their injuries and are recovering. My thoughts and prayers are with the family and friends of those who have passed away and the injured.”

I can also confirm two other Australian citizens were injured in the attacks. They have received medical treatment for their injuries and are recovering. My thoughts and prayers are with the family and friends of those who have passed away and the injured.

The attacks took place as Christian worshippers attended services to mark the religious occasion of Jesus Christ’s resurrection and bombs were also detonated in a number of luxury hotels in the country. Some reports claimed bombs were detonated as holidaymakers queued for their breakfast.

There were originally a total of eight blasts hitting four hotels and three churches, with the first taking place at around 8.45am on Easter Sunday (1.45pm AEST). No group has claimed responsibility for the attacks yet, but 7 News reports investigators believe a small Islamist-inspired group may be behind the bombings.

News.com.au reports that another van parked near one of the Sri Lankan churches targeted on Easter Sunday has now exploded.

According to the report, authorities inspected the van on Monday after people reported it had been parked near St. Anthony’s Shrine in Colombo since Sunday. Three bombs were discovered which police tried to defuse, but they detonated. So far there have been no reported injuries from this bomb.

A further 87 bomb detonators were found at a bus station in Colombo and 24 suspects were in custody for questioning, according to the report.

Residents and tourists have been told to stay inside for their safety so authorities can identify if there are any other bombs in the area. Morrison previously condemned the attacks and encouraged anyone with family to contact the Department of Foreign Affairs on 1300 555 135.

“As we move into the next few days, I am sure the information will be become more sickeningly real and the devastating nature of this horrific attack on innocent lives on the holiest of days on the Christian calendar is just absolutely devastating,” he said. “I reach out particularly to our Sri Lankan community here in Australia and to the beautiful people of Sri Lanka, Australia sends its heartfelt sympathies and our prayers and our support in this terrible time.”

My statement in response to the terrorist attacks in Sri Lanka. pic.twitter.com/lGncvjVSNt

Have you been following this story? Have you ever visited Sri Lanka?