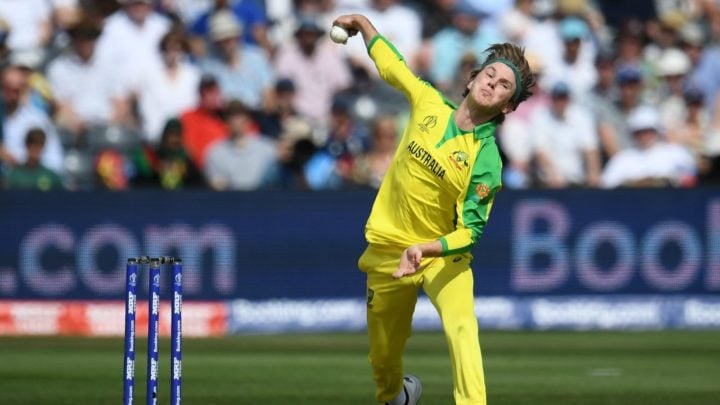 Cricket fans have questioned whether Aussie player Adam Zampa had tampered with the ball during a match against India. Source: Getty

Australia’s cricket captain has been forced to publicly defend his team as new ball tampering allegations emerged over the weekend.

Aaron Finch spoke out in defence of teammate Adam Zampa on Sunday after he was captured taking something out of his pockets during a World Cup match against India in the UK.

Photos of the bowler have been spread across social media with many questioning whether he was trying to give his team an advantage in the competition.

In the footage Zampa can be seen placing his right hand in his pocket before rubbing and spinning the ball in his hands as he prepares to bowl.

Many have claimed he was following in the footsteps of Cameron Bancroft who was caught using sandpaper to tamper with a ball in South Africa last year, and subsequently banned from the game for nine months, along with David Warner and Steve Smith who both landed 12-month suspensions.

“Fairly obvious he was cheating, I think it was most likely an abrasive substance like sand and he was trying to rub on the ball,” one person wrote on Twitter. Another wrote: “What the hell is this? Adam Zampa with sandpaper 2.0?”

While a third added: “Something fishy.”

However team captain Finch has since spoken out about the supposedly suspicious activity and claimed there was nothing untoward happening, revealing Zampa was simply warming his hands in the cold British weather.

Asked about the incident Finch said told UK newspaper the Metro: “I haven’t seen the photos. I know he has hand warmers in his pockets like every game and uses them.”

Others have come out in support of the sportsman, echoing Finch’s comments that Zampa was following the rules.

While a second claimed: “Just making his hand dry to get the grip of the ball.”

The allegations follow a difficult last year for the team who were found to have deliberately tampered with a ball at the third Test in Cape Town in March 2018.

Bowler Cameron Bancroft was caught on the big screen appearing to rub a yellow object on the ball. He was confronted by the umpires and told to empty his pockets on the grounds, although no yellow object was found.

Video footage of the incident appeared to show Bancroft discreetly slipping the yellow object down his pants.When faced with the video evidence, skipper Steve Smith sensationally admitted he had formulated the tampering plan with senior members of the team and instructed Bancroft to put it into action.

It was later revealed that David Warner was also involved in the incident, which also led to the resignation of Cricket Australia head coach Darren Lehmann.

Have you been watching the World Cup? Do you think Adam Zampa tampered with the ball?