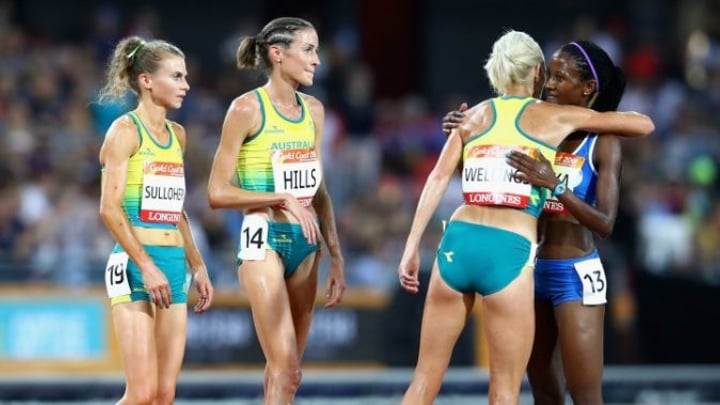 With many Australians feeling ashamed by the recent actions of Australia’s cricket team, a number of athletes at the Commonwealth Games have restored the nation’s faith in our sporting heroes.

During Monday night’s 10,000 metre women’s track race, three Australian athletes ensured they remained on the field to offer encouragement for a racer who was lagging behind the rest of the competitors.

Lineo Chaka, of the African nation of Lesotho, was the only competitor left on the track after everyone else had crossed the finish line. As the rest of the athletes swiftly made their way off the course, Chaka continued to run her remaining laps in her effort to finish the gruelling race. While Chaka ran, Australian Celia Sullhohern, Madeline Hills and Eloise Wellings could be seen banding together and cheering on their competitor.

All three women had finished the race minutes earlier and wanted Chaka to know they had her back. It was Chaka’s first ever attempt at running the race and it was clear the three Australian athletes knew how hard it would be.

You don't get medals for sportsmanship but this is what it's all about.

The Aussies wait until the last competitor has crossed the line in the 10,000m before leaving the track. All class. #GC2018 pic.twitter.com/sPoWZkvpfa

Sullohern, Hills and Wellings were all visably exhausted after completing the race, but that didn’t stop their Aussie spirit from shining through in front of a packed stadium on the Gold Coast. As Chaka approached the finish line, the three women were seen cheering and encouraging her to run to the best of her ability.

When she eventually crossed the line, the three women were there to hug Chaka and congratulate her for a brilliant effort. Sullohern, Hills and Wellings didn’t receive medals during the race.

“You don’t get medals for sportsmanship but this is what it’s all about,” the account tweeted. “The Aussies wait until the last competitor has crossed the line in the 10,000m before leaving the track. All class.”

Fans of the Games were quick to share the delight in the touching moment.

One person wrote: “Absolutely fantastic! Now that is what a helping hand is about. Perhaps fellow Australians can take note?”

Another message read: “What TRUE SPORTSMANSHIP is all about!! Good on you Aussie Girls!!How INSPIRATIONAL is that,” while a third added: “Sad that this has created such interest. It should be the norm!”

The scenes come a day after a New Zealand cyclist was blasted for being disrespectful during a recent race. During the 400 metre individual pursuit finals, the Kiwi was so far ahead of Australian Jordan Kerby that he took his feet of the pedals as he crossed the line.

Commentator Kate Bates called the move “disrespectful”, noting that his actions was a way of showing “his dominance over the Australian”.

Have you been watching the Commonwealth Games? What did you think of this moment on Monday night?