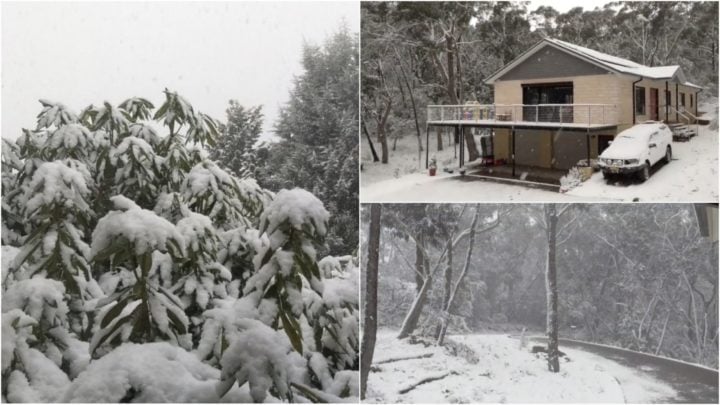 NSW has been covered with a thick dusting of snow. Source: Twitter/BlackheathWx and MountainPine.

Australians have been warned to brace themselves for another chilly night, with the current cold snap expected to carry on until Monday as severe winds and wild winter weather continues to lash the east coast. The latest update comes after NSW was covered with a heavy blanket of snow today, leaving many people struggling to go about their business.

The Great Western Highway was closed temporarily on Saturday as a result of the icy weather, leaving the Blue Mountains cut off for several hours as the local State Emergency Services (SES) setting up refuge stations in a bid to help motorists who found themselves stuck on the roads in the adverse conditions.

Sydney Airport also urged travellers to check with their airlines before journeying to the airport after several flights were impacted by the weather conditions.

Those who live in New South Wales have been among the worst affected by the winter blast so far, with residents in Illawarra, Hunter, South Coast, Central and Southern Tablelands and the Snowy Mountains receiving the brunt of it.

“Take extra care over the next few days and keep an eye on friends, neighbours, and those without shelter,” the Bureau of Meteorology said. While the weather service also warned of an increased avalanche risk around the Alpine mountains.

Many local residents woke up to find a thick dusting of snow, with locals in Katoomba seeing as much as 8cm of the white stuff as people took to social media to share jaw-dropping images and videos of the snow where they live.

@BOM_NSW Good snowfalls across the Blue Mountains and Oberon Plateau today. Snowing nicely again at midday in Blackheath. Still about 4cm to 5cm on the ground. These photos are of Blackheath earlier today and the last one is Oberon this morning. pic.twitter.com/IKKMMcaFZW

One person in Blackheath, NSW, shared an image of snow-capped trees in their local area, revealing they had braced the cold spell to take their dogs out for a walk. Meanwhile a Katoomba local posted a video to YouTube showing the thick covering on their house and car, which was barely visible through the crisp white snow.

The Severe Weather Warning has been updated with damaging winds possible across a number of districts including the #CentralTablelands and #Illawarra. Winds are expected to remain strong during the afternoon. Get your latest #warnings at https://t.co/xfmMo2J52b pic.twitter.com/EMI8cveYbK

Other parts of the country have also been affected by the weather, with Victoria also being lashed by strong winds, which reached as high as 120 km/h in Cape Otway. While a woman also tragically died on Friday after a tree fell onto the car she was travelling in in the Yarra Ranges. The female passenger died at the scene while the adult driver and two children survived.

Fans at Canberra’s Manuka Oval also braved freezing temperatures to cheer on the Giants as they took on Hawthorn Football Club, with temperatures plummeting to as low as 1 °C, with a ‘feels like’ temperature of -7 °C.

Went for a walk but had to cut it short cause the dogs were too cold. The snow on the native plants looks beautiful @BOM_NSW #Snow #Blackheath pic.twitter.com/Bt5y0PfkJk

Meanwhile Queensland escaped the worst of the cold front, with Brisbane reaching highs of 24 degrees on Saturday, despite westerly winds up to 40 km/h.

The BoM initially issued the severe weather warning on Wednesday, predicting that an icy Antarctic front would move in from the south – affecting southern parts of South Australia on Thursday, before sweeping through Victoria and into New South Wales on Friday and Saturday.

Is the weather bad where you live? Have you had any snowfall?