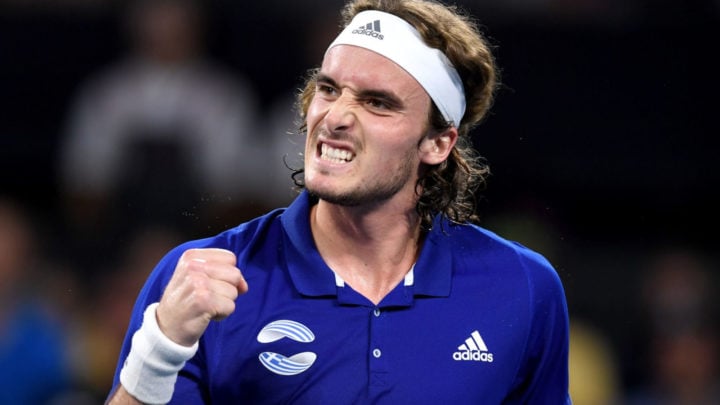 Speaking after the clash, Tsitsipas said it was an accident and he "didn't mean to do it". Source: Getty.

While Australian tennis fans may be used to seeing homegrown star Nick Kyrgios lose his cool on the court, his opponent Stefanos Tsitsipas gave him a run for his money on Tuesday evening after losing to the Canberra-born player during an ATP Cup clash in Brisbane.

In a two and a half hour clash at the Pat Rafter Arena, Kyrgios claimed a 7-6, 6-7, 7-6 win over the 21-year-old, securing a group win for Australia in the competition. However it was the actions of Tsitsipas after he lost the first set that captured the most attention, after the sportsman hurt his father after launching into a spectacular meltdown.

Footage of the bizarre tantrum has emerged online and shows the Greek player thrashing his racquet through the air after losing the opening set to Kyrgios. Tsitsipas then slams his racquet down once more, this time appearing to catch the arm of his dad Apostolos.

Apostolos, who is the Greece captain, can then be seen getting up from the courtside bench, clutching his right arm and exchanging stern words with his son. However, as Stefanos attempts to take his seat on the bench he is then approached by his mother, who had been seated in the stands.

Julia Tsitsipas then appears to scold her son for his actions, before the young star takes a seat with his head in his hands before returning to the court for the second set.

Here's the moment Stefanos Tsitsipas injured his Dad Apostolos when he smashed his racket!!

The telling off didn’t seem to have much of an impact on Stefanos though as he then received a point penalty for unsportsmanlike conduct after he smashed a ball towards his bench, where his father had resumed his place, during the second set. This time though, Apostolos seemed to hedge his bets and moved behind the bench for the remainder of the game.

Following the match, world number six Tsitsipas said: “It happened accidentally. I didn’t mean to do it and straight away forgot about it and moved on from there.”

While Kyrgios defended the youngster, telling Channel Seven: “I didn’t see it (incident). I don’t think he meant it as well. I don’t think you should be giving it too much attention or looking too far into it, to be honest. I’ve done some stupid things as well in the heat of the moment, so it was obviously an accident.”

Fans were shocked by the exchange though, with many taking to Twitter to discuss the incident. One person wrote: “This is why I think the game needs to send out harsh punishment for smashing a racket. I always worry about the ball kids, linesman, etc getting a piece of a racquet in their eye or worse. Fine should be no entry into next grand slam!”

Another said: “What an awful behaviour! after his racket smashing in Abu Dhabi (only an exhibition!) where he nearly hurt a ballkid now its his dad [sic].”

However others said Tsitsipas’ actions are no worse than those of other players in the past. One person wrote on Twitter:  This so reminds me during Davis Cup against Kyle Edmunds and Great Britain when Denis hit Arnaud Gabas and fractured his eye socket. Denis learned his lesson and has been a model tennis player since. Time Stefanos does the same. Zverev also for that matter.”

Another claimed: “Federer behaved the same when he was his age … He didn’t injure anybody but he had a history of bad behaviour when he was young.”

What do you think of this video? Are you a fan of tennis?