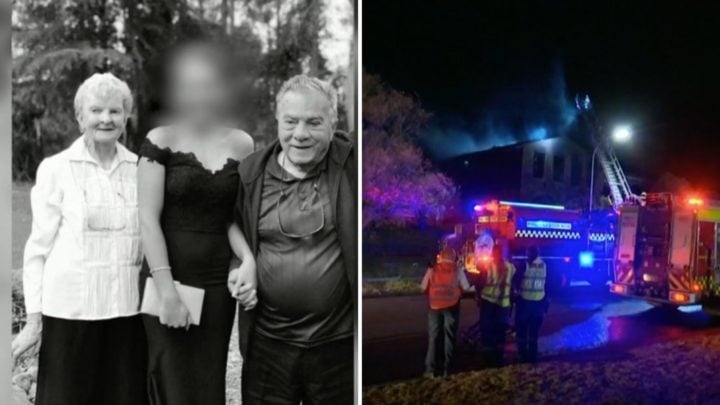 A Sydney community is in mourning after fire destroyed a family home in the suburb of Ambarvale – leaving a man in his 80s dead and his wife of 60 years and their son fighting for their lives in hospital. New South Wales Police confirmed a fire broke out in the home along Lavinia Place near Campbelltown at around 12:40am on Saturday morning and despite their best efforts, the man couldn’t be save.

Sadly, authorities then discovered the body of Flavio, but he couldn’t be saved, with police explaining in a statement: “The home sustained significant structural damage and a crime scene has been established. Once the home has been declared safe, inquiries will begin into the cause of the fire.”

Meanwhile, neighbours who witnessed the devastating fire appeared on 7 News Sydney, where they spoke of the seriousness of the fire and how they did everything they could to get everyone out alive. Roy Lucas said he could hear that Clare and Flavio were trapped inside their home.

“The heat was unbelievable, let alone the smoke,” he told reporters from the scene.

Another neighbour, John Upston, said he also entered the burning building and discovered Flavio and Clare’s son with burns and hands to his face after he attempted to save his parents. He told reporters: “I just keep going out, ‘Is anyone there? Is anyone there?’ and I heard a faint voice and I just called out, ‘Come to me. Come to me. Come to me’ and it was just like a ghost.”

John said that he went back into the burning property to see if there was anyone else he could save but the fire was to severe by then. Roy added that he was sorry he couldn’t have saved Flavio as well.

John’s wife, Joanne Upston, later took to Facebook to say that her husband did everything he could to get everyone out alive. She wrote: “R.I.P Flavio. Glad you are ok Clare. Prayers for Steven’s recovery.

“Our condolences on your loss. My husband John Upston and neighbour Roy Lucas tried their very best.”

According to 7 News Sydney, the couple had lived in the home for more than three decades, with Flavio and Clare set to celebrate their 60th wedding anniversary later this year. The report also confirmed their son was still in an induced coma in hospital.

“It’s tragic not only for the family involved, but all those other people in the periphery that are involved inadvertently in these situations,” NSW Police Chief Inspector Michael Moroney told reporters, explaining that authorities believe a faulty electric blanket started the fire.

The fire comes just days after Australia Post worker Richard Pumpa was hailed a legend after raising the alarm when he noticed smoke coming from a property whilst out on his morning delivery run.

The quick-thinking postie dialled triple zero after spotting the blaze at a home in Asquith, Sydney, at about 11.30am on Tuesday, and reportedly knocked down the fence in an attempt to douse the flames himself using water. Firefighters from NSW Fire and Rescue then rushed to the scene to extinguish the fire. Upon entering the property, firefighters from Hornsby 050 station discovered the kitchen alight and four pets inside the house.