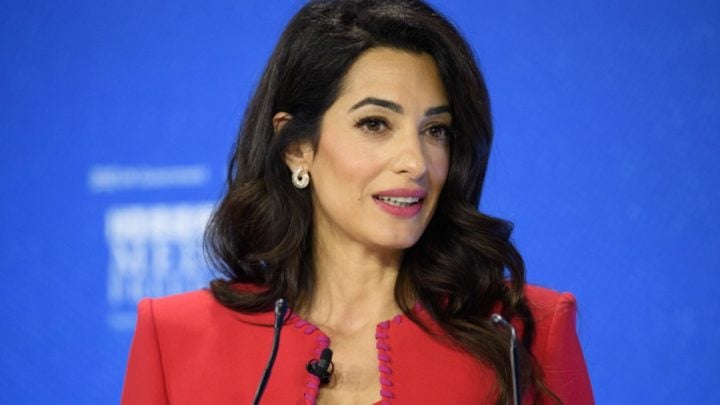 Amal Clooney issued the warning at the Global Conference for Media Freedom in London on Wednesday. Source: Getty

Human rights lawyer Amal Clooney has called out Australia over its press freedom following the recent raids on media last month, saying the current laws and actions Down Under could be used by oppressive leaders as an excuse to “clamp down even further on journalists”.

Clooney, who is wife to Hollywood actor George, issued the warning at the Global Conference for Media Freedom in London on Wednesday, saying: “All governments say they believe in a free press – the right is even enshrined in North Korea’s constitution… what matters is enforcement of this right.”

When asked about the recent raids conducted by the Australian Federal Police (AFP) on the Canberra home of a News Corp journalist and the ABC’s Sydney newsroom, Clooney told The Sydney Morning Herald the decline in press freedom around the world “is not limited to non-democracies”.

“What happens in a country like Australia, or the UK or the US will be looked at by every other leader in the world and potentially used as an excuse to clamp down even further on journalists,” she said.

“I think journalists all over the world are less safe if the rhetoric or even policies or laws in states that are supposed to be free are actually a threat to journalism in that country.”

Last month, a raid was carried out at the home of journalist Annika Smethurst after she wrote an article over a year ago about the the government’s supposed plans to spy on Australians, Nine News reported.

The ABC offices in Sydney were also raided for publishing a story back in 2017 alleging Australian soldiers had committed war crimes in Afghanistan. Journalists involved in the stories could face charges for their articles.

News Corp Australasia Executive Chairman Michael Miller at the time claimed the incidents are a “danger to democracy”.

“The issue is not just these recent raids but the growing number of laws with the power to put journalists in jail,” he said. “It is a danger to our democracy when professional news reporting is at risk of being criminalised.”

Meanwhile, Clooney made a bold statement at the conference in a dazzling red figure-hugging dress which she paired with a matching suit jacket, looking every inch the leading lady that she is.

The human rights lawyer finished off the smart look with a pair of sky-high stilettos and wore her long locks curled, hanging loosely over her shoulders.

Do you agree with Amal Clooney? What are your thoughts on the recent media raids?