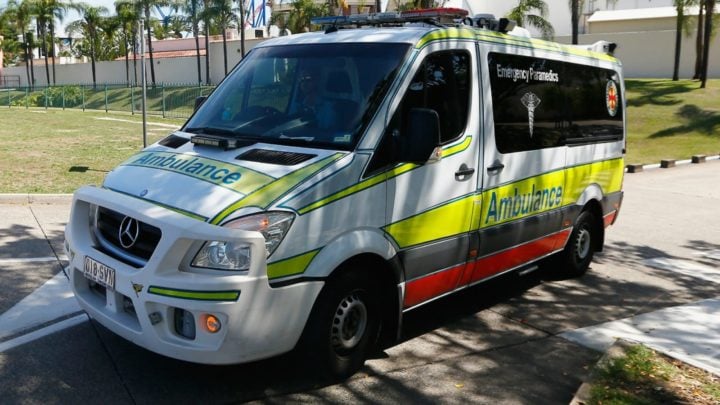 The boy suffered two deep cuts to the back of his neck, as well as minor cuts to the scalp. Source: Getty

A toddler is recovering in hospital after being bitten multiple times by a dingo on Fraser Island in south-east Queensland on Thursday night.

According to a report in The Sydney Morning Herald, the 14-month-old suffered two deep cuts to the back of his neck, as well as minor cuts to the scalp.

The boy’s parents had reportedly been sleeping when a dingo entered their campervan and dragged the toddler into the bush.

“The child’s parents were woken by their son’s cries, which were becoming more distant,” Queensland Ambulance Service spokesman Ben Du Toit told the publication. “The dad got out of the campervan to investigate and found the dingo dragging the toddler away from the campervan.

“They also spotted several other dingoes in the area and near the vicinity, and he immediately ran up and grabbed his son and chased some of the dingoes off.”

The RACQ LifeFlight Rescue helicopter was sent to the island at 12.40am, and the boy and his parents were flown to Hervey Bay Hospital. He is in a stable condition in hospital.

The attack is believed to have occurred at Eurong Beach, a popular holiday spot.

#Fraser Island, Paramedics currently on scene and a rescue helicopter has been dispatched to an infant that has been reportedly attacked by dingoes,near Eurong.

It’s sadly the latest in a string of animal attacks in recent months. Last month, a 72-year-old man was rushed to hospital with life threatening injuries after being mauled by a dog in South Australia.

South Australia Police have confirmed that paramedics were called to a home in Willaston, amid reports the man had been attacked by the pet.

He had been at a friend’s home at the time when he is believed to have fallen. It’s then that police say the dog attacked him and left him with life threatening injuries to his face and neck.

The man was immediately airlifted to the Royal Adelaide Hospital and underwent surgery, but his injuries are still believed to be life threatening.