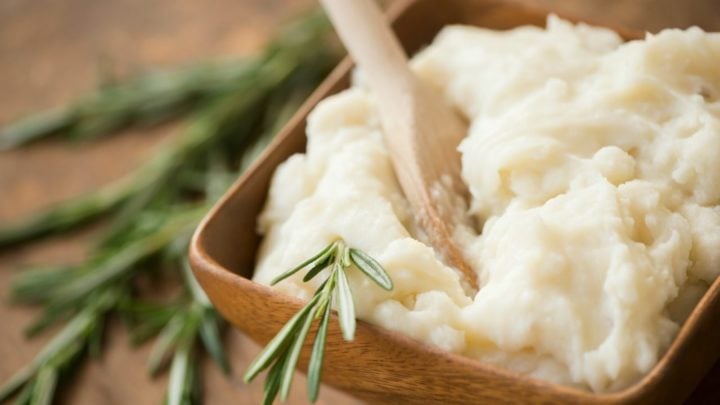 Your guests are sure to be impressed. Source: Getty.

Nothing beats a side of creamy, mashed potatoes to go with dinner. It’s a simple dish with few ingredients, but sometimes it’s a lot harder than it seems.

The standard method for most people is to boil the potatoes in water before mashing together with butter and cream, but according to one top chef, that’s wrong. To make your mashed potatoes extra creamy, American chef Tyler Florence suggests cooking the potatoes in the cream and butter itself — he says it’s an easy way to punch up flavours. Florence also recommends adding a little olive oil, garlic, sage and rosemary to the pan before boiling.

Once the potatoes are tender all the way through, remove from heat and drain immediately. Reserve the creamy potato liquid and mash the potatoes. According to Florence, “it’s the best mashed potato you’ll ever taste in your entire life”.

Starts at 60 recently shared another hack for creamy mashed potatoes. Aussie chef Rob Nixon reckons it all comes down to one thing: potato peelings. Yep, that’s right. According to Rob, who is the creator of Nicko’s Kitchen, soaking the peeled skin in warm milk in a saucepan over high heat is the surprising secret to making perfect mashed potatoes.

Flavour is an important component to a perfect mash and while you might not think potatoes taste like much at all on their own, Rob swears enhancing their flavour in the boiling process makes your mash taste even better. Sounds strange, but apparently it works!

While the skins soak, Rob says to slice each spud in half and boil for 15 minutes, before pushing them through a potato ricer. Then season with butter, salt and pepper, and pour the strained milk from the potato peelings over the top. Rob shared his secret in a video, which he uploaded to the new teen app TikTok.

How do you make mashed potatoes?