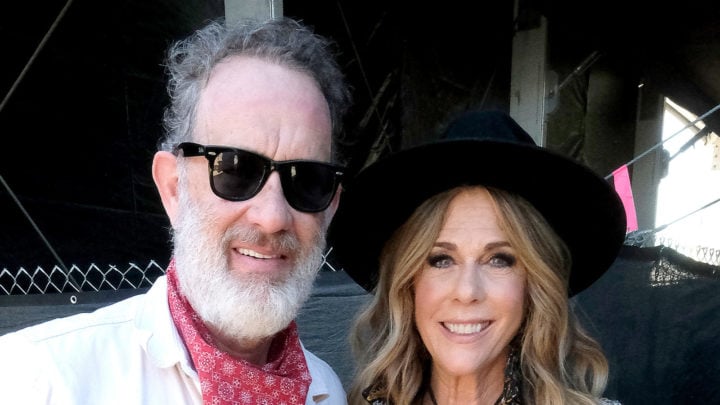 Tom Hanks supported his wife Rita Wilson as she performed at the Stagecoach Festival in California. Source: Getty

There aren’t many people who can pull off a racy cowgirl outfit, but Rita Wilson certainly hit the nail on the head as she stepped out in the skimpy number for a performance in California at the weekend.

The 62-year-old looked smoking hot in a black tasseled skirt and gold and silver patterned jacket with a plunging neckline. Tom Hanks’ wife even showed off a hint of cleavage in the outfit with a sparkly white and gold bra underneath.

Rita completed the look with a pair of black boots and a stylish black cowboy hat for her appearance at the Stagecoach Festival in the city of Indio.

The mother-of-two was supported by her actor husband Tom, 62, who sported a white shirt, navy shorts and a red cowboy style scarf around his neck.

While the couple’s outfits definitely caught the attention of fans, it was Rita’s amazing performance of her newly released songs that really got the crowd excited.

The singer and actress was one of the main performers to take to the stage on the second night of the festival where she delighted onlookers with hits from her latest album Halfway to Home which was released in late March. The album includes songs such as ‘Throw Me a Party’, ‘Faith in You’ and ‘Rule Breaker’.

The actress took to social media to share her delight at being involved in the event, sharing a gorgeous snap with fans on Instagram.

“@stagecoach thank you!!!! Had THE Best time!!! Even in the crazy heat you brought the energy and love!!” she wrote alongside the photo.

@stagecoach thank you!!!! Had THE Best time!!! Even in the crazy heat you brought the energy and love!! #stagecoach #singer #singersongwriter #songwriter

Fans were quick to compliment the singer for her beautiful look and amazing voice, leaving comments of support for Rita.

“You brought it girl!” one person wrote. “Thanks for a great show. We watched hubby and he was/is so proud! It’s your time to glow and he is enjoying it as well as everyone else watching.”

Another added: “You go girl! You look frickin [sic] amazing!” While a third said: “Your outfit is the bomb! Rocking it cowgirl!”

Speaking about her album previously, the performer explained how she hoped her songs would bring joy to listeners.

In the chat with People she said: “[The album] is for singing along at the top of your lungs and for celebrating life. Especially going on tour, I wanted songs that felt like the story of this album, which is a celebration of life and love.”

Are you a fan of Rita Wilson? What do you think of her outfit? Have you listened to her new songs?