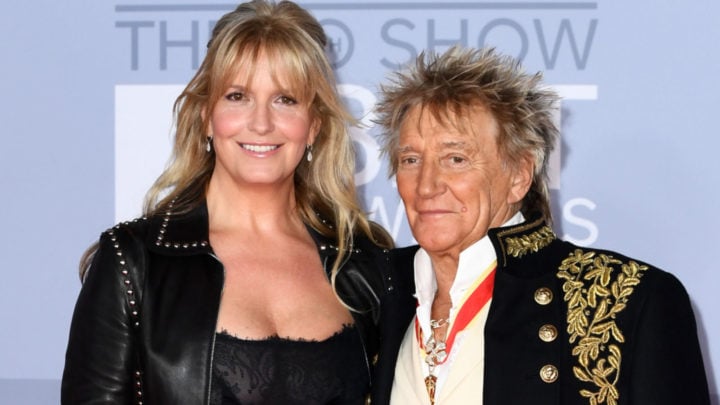 Rod and Penny, who tied the knot in 2007, coordinated their outfits on Tuesday. Source: Getty.

When it comes to flamboyant dressing, it’s a toss up between husband and wife Sir Rod Stewart and Penny Lancaster as to who takes the crown. And the showbiz couple showed off their edgy sense of style on Tuesday night as they attended an awards ceremony in the UK.

The couple, who have been married since 2007, stepped out in London to attend the annual BRIT Awards at the O2 Arena and appeared to have coordinated their monochrome looks for the star-studded occasion.

Penny, 48, looked sensational in a daring black floor-length gown which featured sheer lace panels around her hips and running down the length of the skirt, showing off some skin beneath the light fabric. The satin dress also featured a lingerie-style top which perfectly showed off the blonde beauty’s curves.

The model turned TV personality paired the show-stopping dress with a cropped black leather jacket that featured silver metal studs around the collar and edges, as as well a pair of heeled boots decorated with black lace.

Maggie May crooner Rod is known for his outlandish sense of style and this outing was no different as he donned a very regal outfit, made up of a black military-style coat, embroidered with a gold floral design, and a matching pair of velvet slippers which featured a golden crest on each toe.

The 75-year-old singer also wore a crisp white shirt and cream waistcoat beneath the statement jacket and added a regal touch with a medal on a red ribbon tied around his neck.

Seeing @rodstewart have the crowd singing 'I Don't Want to Talk About It' with the @rpoonline at the #Brits2020 was rather fantastic… pic.twitter.com/RN2U70Ejgg

While Rod’s outfit stole the show on the red carpet, it was his reunion with his Faces band members that really got the audience excited. The hit 1970s group closed the show last night, and the Internet went into a frenzy as Rod took to the stage alongside Ronnie Wood and Kenney Jones.

They performed popular tracks such as ‘Stay With Me’ and ‘I Don’t Want to Talk About It’ and fans gushed over the trio’s performance on social media.

One fan wrote: “Terrific ending, love the camaraderie between you and Ronnie.” Another said: “Well done @rodstewart for making the @BRITs performance about the music & not political or racial views. Great performance.”

Rod, Ronnie and Kenney last performed together at the BRIT Awards in 1993, along with Bill Wyman and the late Ian McLagan.

Are you a fan of Rod Stewart? What do you think of the couple's outfits?