Off-duty duchess! Meghan’s sweet nod to Archie as she steps out at Wimbledon 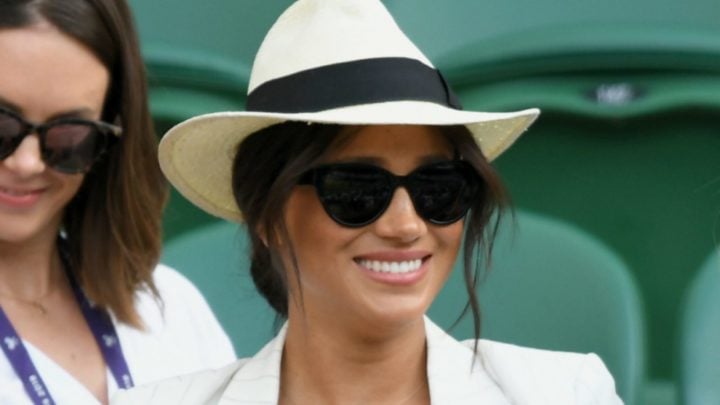 The Duchess of Sussex made a surprise public appearance this week, leaving two-month-old Archie Harrison at home, as she stepped out with a couple of girlfriends at Wimbledon on Thursday.

Meghan, who has previously attended The Championships with Prince Harry and sister-in-law the Duchess of Cambridge, was pictured on Court 1 yesterday as she cheered on close pal Serena Williams as she took on, and beat, opponent Kaja Juvan.

The duchess looked incredible in dressed-down denim for the occasion, opting to forego the usual glamorous style of Wimbledon and wear a pair of ripped blue jeans. She paired the casual pants with a simple black camisole and slipped on a pinstripe double-breasted blazer, by designer L’Agence, which brought a touch of sophistication to her outfit. Her look was completed with a monochrome panama hat.

However it was what the new mother was wearing around her neck that garnered the most attention, as eagle-eyed fans were quick to notice that Meghan was wearing a sweet tribute to Archie Harrison Mountbatten-Windsor in the form of a tiny gold necklace featuring the initial ‘A’.

Meghan was joined at the tennis match by two of her close friends from the US, according to the Daily Mail, sparking rumours that they could have been asked to be godparent to the newest member of the royal family.

The former actress beamed as she clapped and cheered for Williams, enjoying some quality time with university friend Lindsay Roth and pal Genevieve Hillis, who co-hosted Meghan’s baby shower in New York.

Meghan’s unexpected appearance at the tennis competition comes just days before the christening, which the palace confirmed this week would be held in private on Saturday.

However it seems the pair of friends will be among the small number of people invited into the Private Chapel at Windsor Castle on Saturday, as the duke and duchess christen their first child into the Church of England.

The decision to reject press from the event triggered much outrage among the public, as it was revealed that the duke and duchess would even be keeping the identity of Archie’s godparents a secret.

“Archie Harrison Mountbatten-Windsor will be christened in a small private ceremony by the Archbishop of Canterbury in the Private Chapel at Windsor Castle on Saturday, July 6th,” the official statement read. “The Duke and Duchess of Sussex look forward to sharing some images taken on the day by photographer Chris Allerton.”

What do you think of Meghan’s off-duty look? Are you excited to see photographs from baby Archie’s christening?