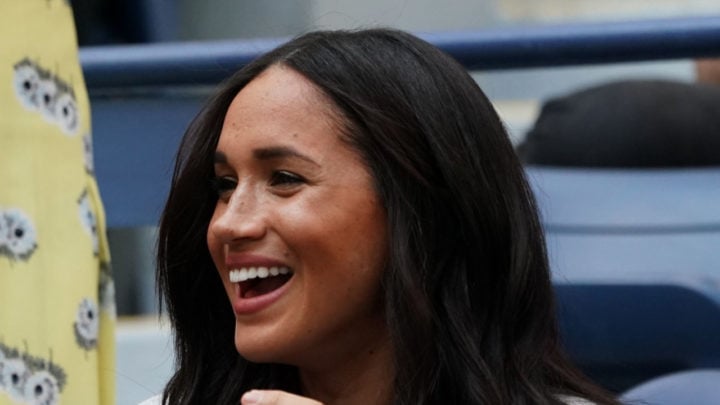 Meghan sported a huge smile on her face as she watched friend Serena Williams compete at the US Open. Source: Getty

The Duchess of Sussex took a much needed break from parenting duties to travel to America this weekend to watch her friend Serena Williams compete in the US Open.

Looking like an every day mum, Meghan sported a casual look in a denim dress and white jacket at the USTA Billie Jean King National Tennis Center in New York on Saturday. With a big smile spread across her face, the new mother looked relaxed and at ease as she cheered on Serena, sitting in prime position in front of Anna Wintour and behind Williams’ husband Alexis Ohanian.

The 38-year-old wore her gorgeous brunette locks down and slightly waved for the occasion, while she opted for minimal makeup with a light pink lip and a swipe of bronzer on her cheeks. Footage captured during the match between Williams and Canadian Bianca Andreescu, showed Meghan happily chatting away in the VIP section of the court while watching on in anticipation.

While Williams ended up losing the match against the young Canadian, all seemed in good spirits as they enjoyed the opportunity to catch up following the birth of Archie earlier this year. Meghan’s trip to the US comes just weeks before she jets off on her first family trip overseas with her little bub and husband Prince Harry.

The family of three are due to depart in just two weeks’ time, and Prince Harry has revealed his excitement over the upcoming trip, saying: “On a personal note, I can’t wait to introduce my wife and son to South Africa!”

We haven’t seen much of the Duke and Duchess of Sussex since Meghan began her maternity leave earlier this year, before welcoming their first child into the world on May 6, and the public have only been treated to two glimpses of the Sussex’s son. However, despite being just five-months-old at the time of the trip, Archie is scheduled to travel to the African country with his parents.

Prince Harry and Meghan chose to share details of the trip on Instagram, rather than distributing an official palace statement, and revealed who they will be meeting with, and what engagements they will be carrying out, when they depart later this month.

“In just two weeks, Their Royal Highnesses will embark on this official tour focusing on community, grassroots leadership, women’s and girls’ rights, mental health, HIV/AIDS and the environment,” the post, shared alongside a sweet photo of the couple, reads.

“This programme has been many months in the making, and The Duke and Duchess are eager to focus their energies on the great work being done in Southern Africa.”

Harry and Meghan will meet Archbishop Desmond Tutu on the trip, as well as carrying out many charitable duties including joining educational program ‘Waves for Change’ on Monwabisi Beach. While Prince Harry will continue his mother Princess Diana’s legacy, as he will join Halo Trust in an effort to rid the world of landmines.

Today, we are excited to be able to announce details for the Duke and Duchess of Sussex’s upcoming tour to Africa! 🇿🇦🇧🇼🇦🇴🇲🇼 • In just two weeks, Their Royal Highnesses will embark on this official tour focusing on community, grassroots leadership, women’s and girls’ rights, mental health, HIV/AIDS and the environment. This programme has been many months in the making, and The Duke and Duchess are eager to focus their energies on the great work being done in Southern Africa. From meeting with Archbishop Desmond Tutu to joining ‘Waves for Change’ on Monwabisi Beach, the South Africa programme will be educational and inspiring. The Duke is especially proud to continue the legacy left by his mother with her work in Angola as he joins Halo Trust again in an effort to rid the world of landmines. HRH will also travel to Malawi where he will check in on the British Army’s partnership with African Parks and will be working on the ground supporting local communities. The Duke is particularly proud to be able to deliver an exciting new initiative, a Queen’s Commonwealth Canopy three-country partnership which he designed and consulted with Governments in Namibia, Botswana and Angola to protect forest and wildlife corridors around the Okavango Delta. The Duchess will be working with local organisations to promote women and girls’ health and education, entrepreneurship and leadership. With such a textured culture and history, Their Royal Highnesses are grateful for the opportunity to connect with those on the ground in Southern Africa and to be inspired by the work being done and learn how they can be better supported. As President and Vice President of The Queens Commonwealth Trust and The Duke’s role as Commonwealth Youth Ambassador, The Duke and Duchess cannot wait to meet with young leaders mobilising change and adding to the beauty of these Commonwealth countries 🇿🇦🇧🇼🇦🇴🇲🇼 • “We look forward to seeing you soon!” • Photo ©️ PA images / Tim Graham – Getty Images / @Sentebale /@AfricanParksNetwork / @YouthAlert

Harry, 34, will also travel to Malawi to check on the British Army’s partnership with African Parks, and will also deliver a brand new initiative which he designed himself, a Queen’s Commonwealth Canopy three-country partnership, with Governments in Namibia, Botswana and Angola, to protect forest and wildlife corridors around the Okavango Delta.

The post continued: “The Duchess will be working with local organisations to promote women and girls’ health and education, entrepreneurship and leadership.” It concluded: “We look forward to seeing you soon!”

Are you a fan of Meghan? What do you think of her casual look?