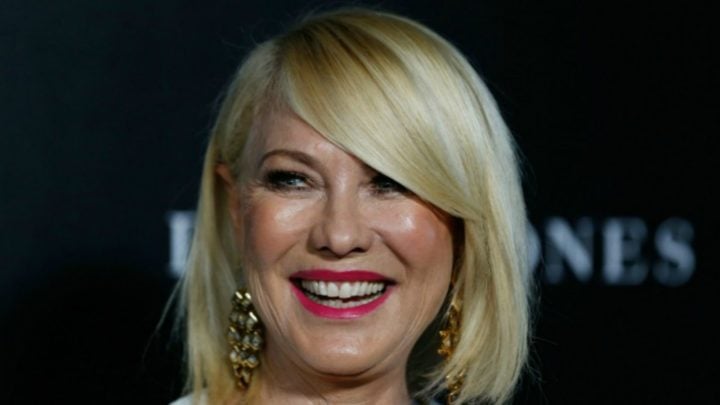 If you thought entering your 60s meant you had to tone down things in the style department, think again. Entertainment personality Kerri-Anne Kennerley, 65, put on a stunning display in a vibrant floral suit as she attended a start-studded event on Friday. Kerri-Anne wowed crowds in the standout power suit, looking every bit the leading lady that she is.

The Studio 10 presenter showed off her quirky style in the fitted blazer which featured an asymmetrical hemline, eye-catching floral pattern and 1980s-inspired shoulder pads. She completed the look with matching suit trousers and a purple top.

Standing tall, Kerri-Anne chose to pair the ensemble with red statement heels and very natural looking makeup, which included a touch of blush and a soft pink lip. The elegant entertainer wore her short blonde locks curled for an effortlessly chic look.

Celebrated the launch of @runwayroom cosmetics today! 💞 I have huge admiration for a working mothers like @alexfevolamakeup congratulations 🌸

Meanwhile, Kerri-Anne’s glamorous appearance comes one month after showed off her incredible sense of style, putting on a glittering display at the opening of a new musical in Sydney. The 65-year-old looked incredible as she posed on the red carpet for the event, where she was among stars who were invited to watch new stage show ‘Muriel’s Wedding The Musical’, based on the iconic ’90s movie

Kerri-Anne dazzled in front of the cameras in an eye-catching gold sequinned top which featured full-length sleeves and a crew neckline, which she layered with a chunky black and gold necklace which matched her dark nail polish. While the star’s choice of top was bright and bold, Kerri-Anne paired the show-stopping choice with a pair of simple, tailored black trousers, and a pair of understated black patent heeled boots.

Not one to fade into the background though, the blonde beauty added an extra sparkle to her look with a contrasting handbag adorned in silver sequins. Allowing her sparkling outfit to do the talking, Kerri-Anne kept her make-up understated, opting for a subtle dusting of bronzer and blush on her cheekbones, a soft nude lip and subtle smokey eyes.

It comes after the presenter, who farewelled her beloved husband John earlier this year, sat down with talk show legend Sir Michael Parkinson this month. The English broadcaster, who attended their star-studded wedding at the Sydney Opera House in 1984, caught up with the Studio 10 host at his home in London, ahead of his upcoming Aussie tour, as he opened up on his friendship with John.

Sir Michael Parkinson has been the talk show king for decades. Now, he catches up with his friend & daytime TV queen Kerri-Anne at his home in London, ahead of his upcoming Aussie tour. #Studio10 pic.twitter.com/ccY88QXmML

In 2016 John sustained spinal cord damage following a freak fall, when he slipped off a balcony at a golf course in Coffs Harbour. He was placed into an induced coma and taken to Sydney where he had emergency surgery on his spine, but the incident left him paralysed and he had to learn how to speak again. Kerri-Anne cared for him in the years that followed, all the way up until his sudden death in February.

Do you like Kerri-Anne Kennerley's style? Are you a fan of 1980s-inspired power suits?