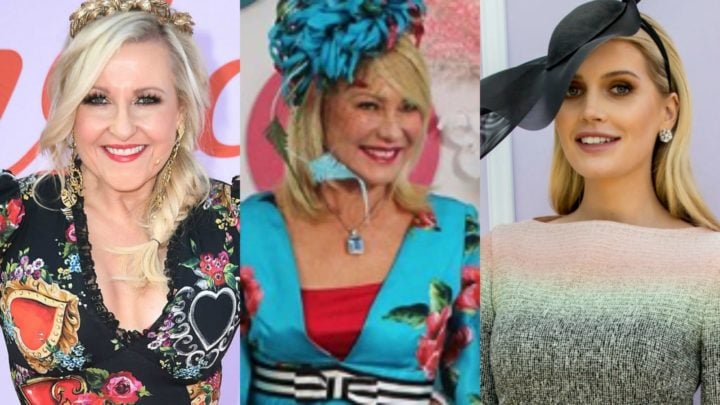 Everyone from Kerri-Anne Kennerley, to her co-star Angela Bishop, and Kitty Spencer wowed in glamorous frocks at this year's Melbourne Cup. Source: Getty

It’s the biggest racing event of the year, promising a day full of glitz and glamour – and this year’s Melbourne Cup did not disappoint. Everyone from Kerri-Anne Kennerley, to her co-star Angela Bishop, Carrie Bickmore and mining magnate Gina Rinehart wowed in glamorous frocks at Flemington Racecourse.

Never one to shy away from a bold fashion choice, Kerri-Anne stole the show on Tuesday in a custom-made turquoise floral frock, which featured statement frilly sleeves and a contrasting monochrome belt.

She finished off the number with an elaborate matching fascinator, a blue bag and gold pointed heels. Allowing her flamboyant outfit to do the talking, Kerri-Anne wore her blonde locks out straight.

She was joined by her Studio 10 co-star Angela Bishop who opted for a fitted mermaid-style Dolce & Gabbana dress with dramatic sleeves and a gold head piece. The presenter added huge gold earrings to the look and wore simple black peep toe heels as she posed for snaps in front of the sea of cameras and reporters.

Giving her strong competition was fellow presenter Sarah Harris, who stood out from the crowd in a bright red Carla Zampatti ensemble, which featured a flowy halter-neck blouse and straight-leg trousers. But it was Sarah’s colourful fascinator that really stole the show, with a striking floral design.

Elsewhere, Carrie Bickmore took a day off from mum duties and dressed to impress in a figure-hugging off-the-shoulder red frock, which had a ruffled sleeve on one side. She wore her hair in soft waves to the side and accessorised with a non-traditional head piece, opting for a trendy gold hair clip instead. The Project star paired the fierce number with drop diamond earrings, a small gold hand bang and strappy metallic red heels.

Princess Diana’s niece Lady Kitty Spencer – who is first cousin to Prince William and Prince Harry – also made a grand entrance at this year’s racing event sporting a multi-coloured ombre dress, completed with a striking black fascinator, a black clutch and a pair of strappy heels. While the blonde beauty wore her blonde locks styled in loose waves.

Meanwhile billionaire Gina Rinehart stepped out in a beautiful white frock which featured a striking red pattern. She added strappy silver sandals and a flower crown to complete her look and matched up with elegant pearl earrings as she flashed a smile to the cameras.

At 3pm (AEDT) the country came to a standstill as Aussies flocked to the nearest TV screen to watch the nation’s most iconic horse race, with home-grown thoroughbred Vow and Declare taking home the win in a staggeringly close finish.  Trained by Danny O’Brien, Vow and Declare is the first Australian-bred horse to win the Melbourne Cup since Shocking in 2009.

Second place in the world-famous race went to Prince of Arran, while Il Paradiso came in third. However there was some drama at Flemington following the race as Master of Reality, who initially bagged second place, was relegated to fourth after the stewards lodged a protest.

Which is your favourite outfit so far? Have you ever been to the Melbourne Cup?