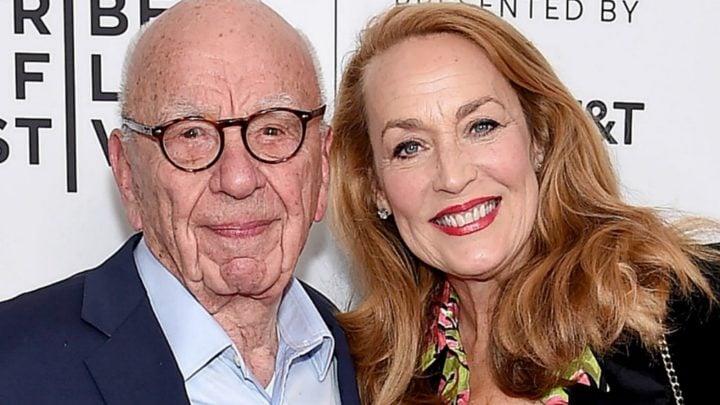 They stunned the world when they famously tied the knot in 2016 — and Jerry Hall and Rupert Murdoch still look as happy as ever.

Jerry, 62, and Rupert, 88, looked as close as ever as they attended the star-studded screening of The Quiet One during Tribeca Film Festival in New York City on Thursday.

And Jerry, who was once married to Mick Jagger, was absolutely glowing in yet another fabulous ensemble. This time, the star opted to jazz up a simple pair of trousers – a clothing item most women have multiple pairs of in their wardrobe.

Showing fans just how it’s done, the Vogue cover star wore a pair of fitted black slacks and a lime green blouse patterned with fuchsia floral print to the event. On their own, the top and pants could easily be something most women wear for their morning coffee run or for a trip to the local shops, but with the right accessories, Jerry shows that these wardrobe staples can be transformed into something more glamorous for a night out on the town.

The former model accessorised with a tailored black blazer, matching patent leather heels, and some jewellery. Adding a pop of colour to the outfit, Jerry wore a red lip and completed the look by wearing her luscious blonde locks in a wavy style.

Never one to upstage his wife, Rupert wore a simple navy suit matched with a light blue dress shirt. Rather than the usual dress shoes, the media mogul sported a pair of sneakers.

Jerry has been happily married to Rupert since 2016 when they tied the knot in London. The couple, who have 10 children between them, first met in Australia in 2015, when Jerry was touring with The Graduate, before making their first public appearance together at the Rugby World Cup final at Twickenham in London.

They have attracted a lot of attention since their marriage – deciding to wed after just months of dating.

Jerry made a name for herself in the 1970s as a model, but it was her off-again, on-again relationship with Rolling Stones legend Mick Jagger that made her one of the society’s enduring ‘it girls’. She has also appeared in several films including Urban Cowboy (1980) and Tim Burton’s Batman (1989).

Do you like Jerry Hall’s style? Do you think Jerry and Rupert make a good couple?