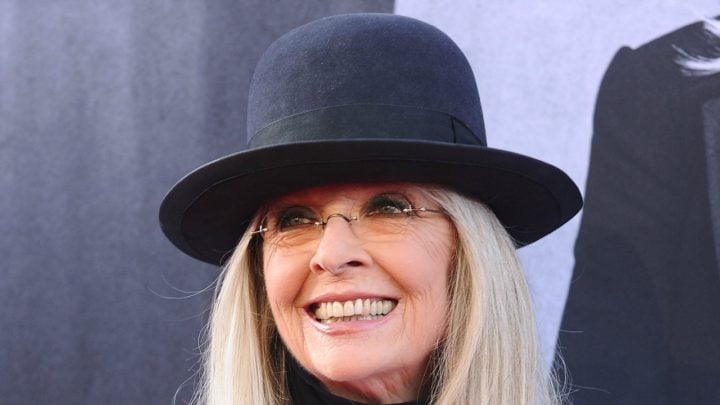 Diane Keaton is known for her stunning black and white outfits but the actress changed things up this week with a bright orange frock. Source: Getty

Diane Keaton is well known for her classy black and white outfits, but the actress has now chosen to change things up with a very bold coloured dress – and it’s her first in an incredible four years.

Just like many over-60s, the actress, 73, has become accustomed to playing it safe and wearing monochrome in public, so it came as a surprise to her fans when she added some colour to her wardrobe this week.

Taking to social media, the Book Club star shared a snap of herself in a bright orange dress, explaining it was the first time in many years she has steered away from black and white.

I DECIDED TO TRY A LITTLE COLOR FOR THE FIRST TIME IN FOUR YEARS! WHAT DO YOU THINK? YOU CAN BE HONEST, I CAN TAKE IT!

“I decided to try a little color [sic] for the first time in four years,” she wrote on Instagram alongside a photo of her in the orange number.

The talented actress then asked followers for their advice adding: “What do you think? You can be honest, I can take it!”

In the photo, Keaton can be seen in the bold frock which hangs just below her knees as she covers her face with her hand. It is paired with a white long-sleeved top underneath.

Read more: Diane Keaton reveals her brother has dementia and may no longer know who she is

The post received a stream of comments from followers who shared their thoughts on the change in style, with many complimenting the actress on the new look.

“That pop of color [sic] seems very happy to live on you! Beautiful!” one person wrote. “A little color [sic] never hurt anybody! Just fabulous!” another commented.

While a third added: “I would adore you if you wore a barrel. Maybe a softer orange? If that’s a thing.” To which Keaton jokingly replied: “An orange barrel?”

Meanwhile Keaton, who stars in the soon-to-be released film Poms, recently opened up in a chat with People about her views on marriage and why she has chosen not to tie the knot with any love interests.

Speaking about her decision to stay single, the star said she isn’t sad about never marrying – admitting it just isn’t for her.

“I don’t think it would have been a good idea for me to have married, and I’m really glad I didn’t, and I’m sure they’re happy about it too,” she told People.

“I’m an odd ball. I remember one day in high school, this guy came up to me and said, ‘one day you’re going to make a good wife’ and I thought, ‘I don’t want to be a wife. No’.”

Are you a fan of Diane Keaton? What do you think of the colourful outfit? Do you usually choose a particular colour scheme with clothes?