Horsing around! Camilla wows in polka dots as she poses with cute pony 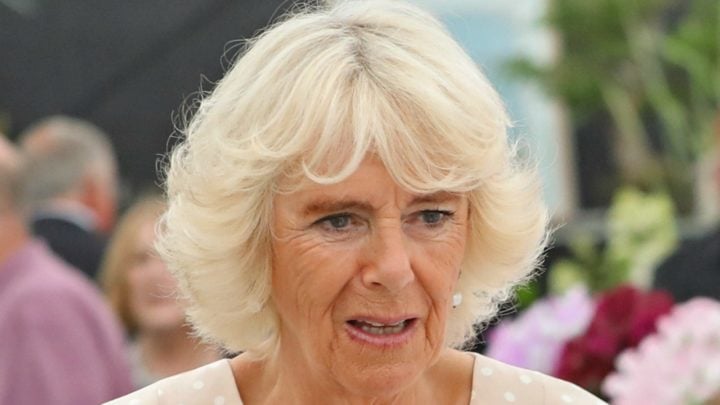 The duchess looked lovely in a beautiful pink polka dot dress for the occasion. Source: Getty

Camilla is known for her elegant style on royal engagements, but she didn’t let her latest glam outfit stop her getting close up to some adorable animals at the UK’s biggest agricultural show.

The Duchess of Cornwall, 72, is known for her love of horses and she looked in her element as she posed for a photo with a small pony at the Royal Welsh Show in Wales on Monday.

She kept her accessories to a minimum with a pair of pretty pearl earrings and her blonde locks in her usual down and slightly waved style.

Meanwhile, Charles looked smart in a light beige suit, white shirt and bold red and grey tie for the visit.

During the visit, the Prince met farming leaders and representatives of his charity Countryside Fund, and presented prizes to winning breeders and their sheep and cattle, while the duchess visited the floral pavilion and saw a number of horticultural projects from local communities.

Meanwhile, Camilla proved she is every bit the fashion royal icon last week, as stepped out in not one, but two stunning outfits, swapping her pretty daytime look for something bolder.

Camilla – who was undertaking a three-day tour of the Devon and Cornwall region alongside the Prince of Wales – first donned a feminine floral number as the royal couple visited the headquarters of pastry makers Ginsters, to mark the 50th anniversary of the Cornish bakery.

The flattering pale blue frock featured a white floral design and fell to Camilla’s knees. She paired the dress with her signature pearl necklace and wore her hair in its usual coiffed style.

In the garden of @therealginsters headquarters, The Duke and Duchess of Cornwall attend celebrations to mark the 50th anniversary of the Cornish bakery.

The family-run company has been baking pasties in Callington since 1969. pic.twitter.com/iWQJRGvQVG

Later in the day, Camilla stepped out in a striking black and white number, which was printed with large polka dots, as the couple attended an evening reception, marking the 50th Anniversary of Prince Charles’ Chairmanship of the Duchy of Cornwall Prince’s Council.

Camilla paired the dress, which featured a tie around the waist, with a tailored white jacket that fastened with four asymmetrical buttons at the front.

Keeping her accessories simple, she opted to stick with the same pearl necklace she wore earlier in the day, swapping her handbag for a classy cream option, and wearing her favourite nude and black heeled pumps.

What do you think of Camilla’s outfit? Do you think she dresses well?