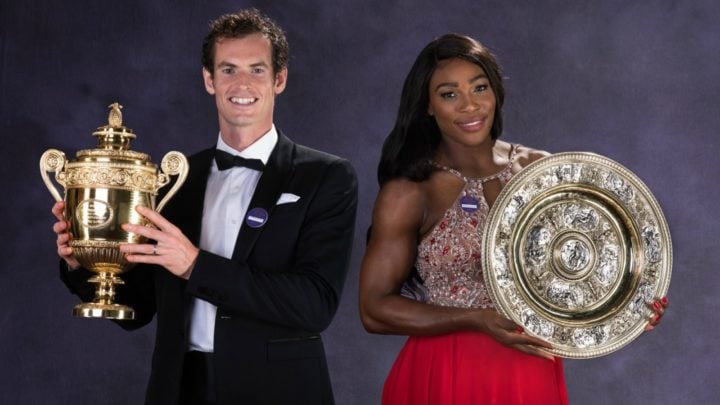 British tennis player Andy Murray ended a week of speculation on Tuesday after he announced he’ll be teaming up with former world number one Serena Williams in this year’s Wimbledon mixed doubles.

The talented pair have won a combined 27 singles Grand Slam titles — nine of which have come at Wimbledon — so tennis fans are definitely in for a treat!

The Brit, who recently underwent hip surgery, had been looking for a partner after he was turned down by world number one Ashleigh Barty. Murray will also be competing in the men’s doubles alongside Frenchman Pierre-Hugues Herbert.

Murray’s agent Matt Gentry confirmed earlier this week that the two former No. 1-ranked players would partner up at the All England Club. And, on Wednesday, the official Wimbledon Twitter page added more fuel to the fire.

The official account shared a short video of the hugely popular duo with their championship trophies alongside the caption: “Coming soon to a Championships near you…”

Many fans were quick to comment on the stellar partnership, with one writing: “So exciting!!! Mixed doubles team of my dreams!!!”

Another added: “Very excited to see these two pair up on centre court very soon. One hell of a formidable combination.”

Meanwhile a third wrote: “I really really hope this happens. My hubby won tickets in the ballot and I can’t actually believe I am finally saying this but IM GOING TO WIMBLEDON!!”

Williams hinted over the weekend that she would consider pairing up with the British tennis star, telling local media, according to Hello magazine: “If you guys really want it… all right, done.

“His work ethic is just honestly off the charts. That’s something I’ve always respected about him. His fitness, everything. To do what he’s done in an era where there’s so many other great male tennis players, so much competition, to rise above it, not many people have done it. He’s actually one of the few.”

Meanwhile Murray previously admitted that teaming up with Williams would be a fantastic opportunity.

“… with everything that has gone on the last couple of years you don’t know what’s coming next or what’s round the corner, the opportunity to play with Serena, she’s one of the best tennis players of all time and one of the biggest female athletes ever,” he said, according to Metro.

“It’s something that I may never get another chance to do, and potentially I might not play mixed doubles again so if I’m going to do it once the chance to play with her is obviously brilliant and not something expected to happen.”

The pair are expected to play their first match together on Thursday.

Are you excited for this mixed doubles team? Are you a fan of Andy Murray and Serena Williams?