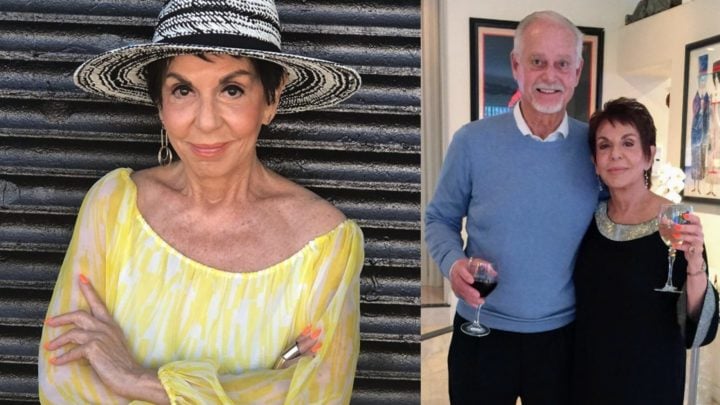 A former Playboy Bunny has opened up on how online dating and meeting a younger partner after her husband’s death has increased her self-confidence and reawakened her passion between the sheets – as she shares advice for other women feeling worried or insecure about embracing intimacy again in later life.

Speaking in an exclusive chat with Starts at 60, Dorrie Jacobson, 84, has opened up on how she’s embracing her body in her eighties and learning to overcome every one of her insecurities after losing her husband of 24 years.

Dorrie is now happily living with her partner Tom, 11 years her junior, in Las Vegas and said the confidence she’s found with him make her feel sexier on the outside too.

“He’s 11 years younger than I am and it doesn’t seem to bother him, he still treats me like I’m a Playboy Bunny!” she joked.

Dorrie, who modelled for Playboy before launching her online blog Senior Style Bible – aimed at empowering older women by offering style and beauty advice – confirmed she met Tom online three years ago after her husband passed away.

“My husband died 10 years ago – he was 20 years older than I was, we had a wonderful life together and it was fine,” she said of losing him.

This year my goal is to bring feeling “sexy” back to women of all ages and body types. Let’s get rid of those pesky media driven “beauty standards” and start loving the skin that we’re in whether we’re 18 or 80. #agelessbeauty #lovetheskinyourin #womenempowerment #selflove #advancedstyle #over50style #lasvegasblogger #seniorstylebible #84andglam

“Everyone’s different, I didn’t mourn my husband’s passing because he had a wonderful life. I celebrated his life rather than mourn his death. Everyone grieves differently but that’s where I was. That’s my thinking to this day.”

She began trying out online dating after overcoming his death, and joked she “kissed a few frogs” before meeting Tom three years ago.

With the relationship has come a whole new passion in the bedroom – something she insisted shouldn’t necessarily diminish for women with age if they still wish for an active sex life.

“A lot of women question their own ability to get back into an intimate relationship because they’re so worried about their bodies and exposing themselves,” she explained.

“What I learned was really interesting, because talking to men that I was dating and that became friends, and asking them about this, they told me, ‘If I was looking for a one night stand I would look for a woman 20 years old, but if I’m looking for a long-term relationship then I want someone who fits in with my family, has the same life experiences that I have and that can meet my friends and be part of the same lie’.

“And another thing was, they have the same fears as we do. They don’t know if they can perform!”

Dear Beautiful Women of the World: Let’s start rejecting all of the impossible beauty standards that we are being bombarded with in the media, and just start loving ourselves as we are. This 80-something body has more than it’s share of imperfections, but here it stands, unretouched and unapologetic, for the world to see, because authenticity is a lot sexier than self loathing. Let’s embrace the skin that we’re in regardless of age or body type. #fyourbeautystandards #agelessbeauty #lovetheskinyourin #womeninspiringwomen #daretobare #sexyseniors #lasvegasblogger #oldlady #lingeriemodel #seniorstylebible #84andglam

For her, rediscovering her sexuality has brought with it a whole new level of confidence in her eighties.

“I have a sex maniac partner which is terrific!” she joked of Tom.

Asked how she’s kept her sex drive into her 80s, when many women struggle after menopause, Dorrie said: “You really have to work at it in terms of keeping passion alive.

“It’s different for each person but I think we’re all sexual beings, we all want to be loved and touched and this is all part of who we are and should be.”

While Dorrie has spoken about struggles with menopause on her blog, she insisted there are remedies for most issues women face – from lubricants to combat vaginal dryness, right through to prescriptions to overcome hormonal imbalances that can make intercourse painful.

The blogger has also written extensively about her dating experiences and previously revealed in one post that she had been forced to come to terms with insecurities over her changing body when embracing intimacy in her life again.

“As someone who was defined by my looks for many years, I am hyper aware of the insecurities that come crashing in as our bodies age,” she explained. “So while keeping your weight in check, exercising and wearing Spanx can give the illusion of a great body when dressed, we all have to come to terms with the imperfect image we see in the mirror when naked.”

Loving my @playboy Bunny Tribute Portrait. It's been so much fun putting my ears back on that I've decided to write a bit about my experiences back in the day. After all…. at 83, I may very well be the oldest Bunny still tottering around. What a crazy thought that is. #badass #oldbroad #playboybunny #vintage #playboy #bunny #83andglam #sexyseniors #seniorstylebible

She added: “So, if you’re feeling insecure about your body, and think that a fear of rejection may be what’s holding you back from dating again, then it’s time to resolve those body image issues.

“I think that it’s important to remember that the women with the greatest sex appeal are often not shapely or beautiful at all, but they do project an air of self-confidence that is alluring and sexually enticing to men. They know how to flirt, and they are confident in the use of their sex appeal. They know how to make that man feel special and desirable and that’s what makes them attractive. It’s not always the most beautiful women who are the most seductive.”

Dorrie recommended speaking openly to people when you try dating again and added: “I always tell women when they go on a first date, you’re not going for a job interview. Just go and have fun, you don’t get into personal stories, you go and have fun.

“It’s not really that different to when we were teenagers. It really is just going out, meeting people, having fun and making new friends. If it works it works, if it doesn’t, what have you really done other than have lunch or dinner with a new friend?”

“So again we’ve got to rethink this!”

Have you met someone after losing a spouse? Have you tried online dating? Or are you struggled to find the courage to try dating again?