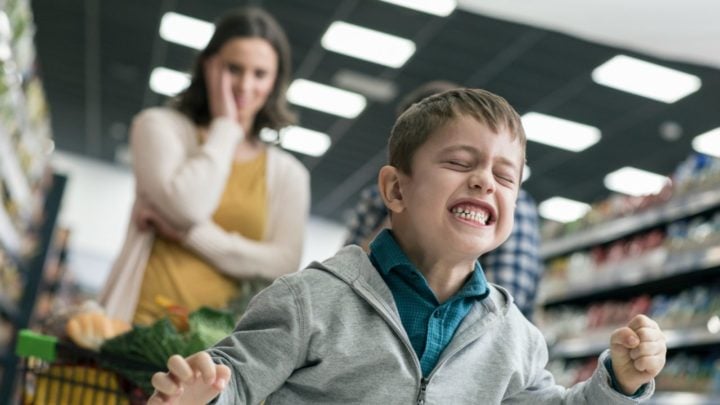 Kids can let parents and grandparents down at the worst possible times! Source: Getty. (Picture posed by models).

Every parent will likely have experienced that hold-your-breath moment after accidentally letting a swear word slip out in front of their kids or grandkids – but for some, it can land them in hot water.

And a group of very embarrassed women have now shared some of their biggest “parenting fails” in an online forum – with some hilarious ones making the list. From kids swearing at school, to one boy explaining exactly why heaven doesn’t exist to a vicar, the kids caught their parents out at some seriously bad times.

The thread on Mumsnet was opened by one mum who wrote: “I got called into school today because my 5 year old called her teacher ‘lame’. Turns out 2 weeks ago while I was bed bound sick, she had binge watched an entire series of South Park on Netflix.

“Luckily teacher saw the funny side but I’ve never been so embarrassed in my life! Any one else want to cheer me up with their parenting fails?!”

The forum didn’t disappoint, with a stream of comments and fails from other parents. And one mum’s made the word ‘lame’ look like nothing.

“I came home one day and my 3yr old lounging on the sofa has just watched Swiper take the Map from Dora the Explorer. She stops sipping on her sippy cup in shock and utters ‘That’s f***ed up’!” she recalled.

Another admitted their own child isn’t a fan of Britain’s Labour leader, as she wrote: “My 2 year old shouted ‘prick!’ when Jeremy Corbyn was on TV the other day (I blame his father) and shouts ‘oh God’ at any tiny inconvenience (that one’s on me lol).”

Her own experience didn’t end there though, as she added: “I was driving with my then 6 year old [dear daughter] when a woman cut me up, I may have uttered a choice phrase or two forgetting about my DD in the back until she piped up with ‘she was a silly old wombat, wasn’t she, Mummy? Or a d***head’…”

Many more shared their own experiences in the car, with one mum echoing everyone’s thoughts as she admitted: “All of my daughters swear words and insults have been learnt in the car!” And to reinforce the point, one mum recalled: “Ach. It happens, I wouldn’t worry. Once when taking Gran home, the car, which was on it’s way out to be fair, started spluttering and juddering. 3 year old pipes up from his back seat “see this f***in’ car!”

And of course many parents will be familiar with their kids dropping their spouse in it too. One mum wrote of her own funny memory: “I remember my daughter saying, ‘look Mummy, I’m Daddy driving! Brum, brum, BLOODY HELL, brum, brum, BLOODY HELL!’ Thank God she never mimicked Mummy driving. The language would have been a lot worse…”

However, a car is at least more private than a school classroom… “My four year old is doing a British wildlife topic in reception, the teacher showed the class a pigeon, my son put his hand and very confidently informed the class that it was a “f***ing pigeon”, I can’t blame that on a tv show!” another mum commented.

And for one mum, her thoughts on God must have got away with her, as her son promptly voiced them himself at the worst possible time at his church primary school. She recalled: “My 6 yo airily told the vicar at his church primary that God din’t exist and heaven was invented to reassure people who were going to die soon.”

With some seriously hilarious phrases catching them off guard, it’s fair to say it’s a challenge for many parents and grandparents to keep a straight face. As one mum pointed out: “I always have to remind myself to tell her off not laugh & encourage it!”

What are your memories of your kids or grandkids embarrassing you?