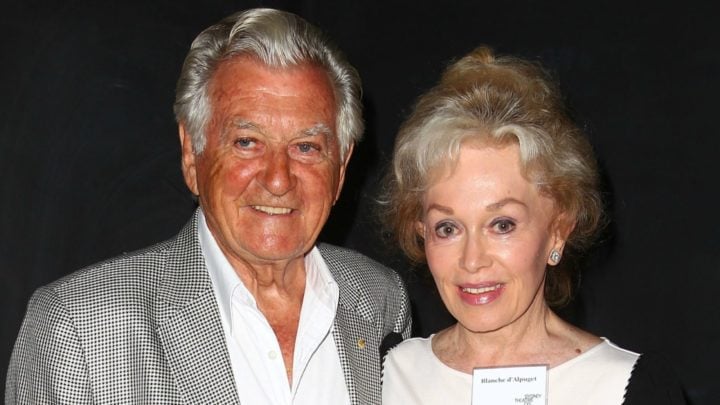 Just over a week after Bob Hake passed away, Blanche d’Alpuget has revealed details of her affair with the late PM. Source: Getty

It’s been just over a week since former Australian PM Bob Hawke passed away and while his political career will be honoured with state memorial service at the Sydney Opera House on June 14, his wife Blanche d’Alpuget has opened up about her affair and relationship with the late politician.

Hawke’s personal life and his infidelity originally made headlines around the country in 1995 when he divorced his wife Hazel (Masterson) and married d’Alpuget. Of course, the affair started much earlier than that and the pair struck up a relationship in 1978. They rekindled their romance in the mid-80s before Hawke left his wife.

Speaking exclusively to The Australian, the 75-year-old admitted she was shocked by the vilification against her relationship with Hawke because she was so in love with him but said she thought their relationship was “destiny”. She also claimed that she originally thought Hawke was “too wild” when they first met and that he couldn’t possibly be the love of her life.

d’Alpuget also confirmed that she and Hawke remained faithful to each other during their marriage – despite how hard it was.

“Both of us were very sexual people, and there was something we, each in our own way, really had to struggle with, not looking sideways,” she told The Australian.

The author also claimed that the last nine months of Hawke’s life were “the most tender and intimate” of their entire lives.

“It has been for me the wild excitement of sexual ecstasy to the great tenderness of looking after a person who was completely dependent upon me,” she said.

While the dissolution of their marriage hurt Hazel deeply, Hawke always maintained he respected her hugely and was even by her side when she died from Alzheimer’s disease in 2013. d’Alpuget told The Australian things were “perfectly amicable” between her and Hazel at family gatherings and she felt pain and sympathy for Hazel because they both loved the same man.

d’Alpuget made her first public TV appearance on Thursday evening in an interview with Leigh Sales on 7:30 where she also discussed how her affair impacted Hazel.

“I used to feel very sad for Hazel. There’s a French song called ‘La vie en rose’, one verse is translated to ‘take me to your arms again’ and every time I sang it or hummed it I used to think of Hazel and feel very sad for her,” she told Sales. “My feelings about Hazel’s sadness didn’t change, I still always, really up until the end, felt that sorrow.”

She also said the final year of her late husband’s life was both difficult and “one of the best times of their lives” and said her role as Hawke’s primary carer brought them closer together.

Do you remember when news first broke of Bob Hawke and Blanche d’Alpuget’s affair?