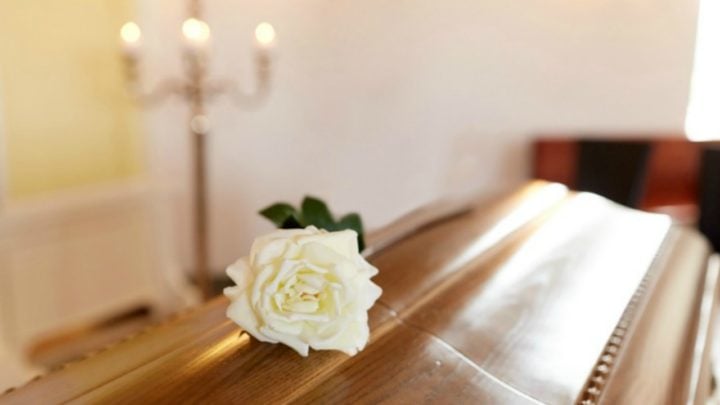 A screenshot of the woman's announcement was shared in Facebook group 'That's it I'm Wedding Shaming'. Source: Getty.

Funerals aren’t cheap these days, with many people now saving for years in a bid to help cover the cost of their own service when the time comes. But one woman has divided opinion online after revealing her plans to combine her own wedding with her Aunt’s funeral.

Just days before saying ‘I do’, the anonymous woman, believed to be from California, USA, told her guests that her Aunt’s open casket would be in display during her nuptials due to “skyrocketing” funeral costs, reports the Daily Mail.

A screenshot of the woman’s announcement was reportedly shared in Facebook group ‘That’s it I’m Wedding Shaming’, sparking outrage as people slammed the woman for her “bizarre”, “weird” and “horrifying” plan.

“Dear friends and family of the wedding, some of you may have gotten the news already but Aunt Karen has sadly passed away from natural causes,” the woman’s post read. “We are all deeply saddened about her loss but we promise that we will not cancel the wedding next week.”In her honor [sic] we know that she would want us to celebrate and have a day filled with love and joy.”
She then went on to reveal her plans for a joint celebration, adding: “I would also like to add that funeral costs are skyrocketing and we will have an open casket session during some of the wedding processions. Feel free to stop by during the wedding to say goodbyes, she will be on display for those who wish to gain some closure.

“Remember, even though losing ones we love can be heartbreaking – there is also a joy in celebrating love and partnership in marriage.”

According to the Mail, many people commented on the post, criticising the woman’s decision, with one writing: “That’s a wedding I don’t want to go to.” Another said: “I’m all for honoring [sic] the woman but a joint wedding/ funeral is weird.”

However one person commented her Aunt would have loved to be at the wedding, praising her unconventional idea: “‘RIP Aunt Karen. That woman loved weddings, good thing she will get to partake in one last one.”

Alternative funeral trends have soared in popularity in recent years as people get creative whilst planning their final farewell, with the latest trend allowing loved ones say their goodbyes from the comfort of their own home thanks to live streaming services.

Company OneRoom Funeral Webcasting set up a series of cameras in the venue which can then stream live footage of the ceremony anywhere in the world with just the click of a few buttons.

When the service is scheduled to start the cameras turn on automatically and record for the allotted time. The footage is then streamed live and can also be recorded to be viewed following the service using the same login details.

Earlier this month, OneRoom’s David Lutterman told Starts at 60: “With a funeral you only get one chance. By making the service accessible online, live or later, no one has to miss it.

“Filming is done discretely and non-invasively by wall-mounted cameras.  Invitation to watch online can be private or public. Recordings are stored securely and can be viewed up to 60 days following the service or downloaded by authorised family or guests.”

What are your thoughts on this story? Do you think it’s strange to have a joint wedding and funeral, or a nice tribute to her Aunt?