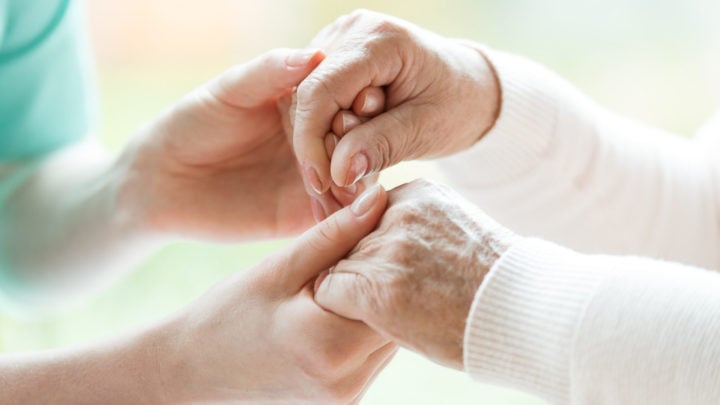 Relationships Australia NSW CEO Elisabeth Shaw provided some insight into how to get elderly parents to accept heklp in the home. Source: Getty

The vow “in sickness and health” is one married couples take very seriously, especially as they age and things become more difficult. But this devotion to each other can also bring with it problems as the elderly struggle to accept help or recognise that it’s time to slow down and let others take on some of the work around the home.

This is becoming an increasing problem in modern society as families choose to keep their elderly relatives living at home, rather than moving them into an aged care facility. While an appropriate decision that could prevent further distress in old age, according to Relationships NSW Chief Executive Officer Elisabeth Shaw, it does in some cases lead to family dilemmas as older family members refuse to allow anyone into the home to lend a hand with daily tasks.

The clinical and counselling psychologist said it’s a common issue brought up by adult children who are continuously hitting a road block when trying to offer a helping hand or enlist the assistance of a carer to ease the burden. Speaking to Starts at 60 about the ongoing problems in Aussie households, Shaw explained changing the every day norm can be stressful for the elderly for both privacy reasons and the fear of losing purpose in life.

They may be referred to as stubborn for continuously declining offers for help but Shaw said it’s difficult for the elderly to do away with that freedom they once had and rely on others to get by, especially after years of being the main support for their partner. “Our older generations are in the main, fiercely independent,” she told Starts at 60. “Doing things for themselves gives them independence, a role in life, a purpose for getting up each day.

“Most of our lives we are defined by what we do. Suddenly having nothing to do make the days longer, and in many cases, leads to depression and a sense of life having no value or being truly pointless.”

For Starts at 60 readers the issue is close to home, with a number of over-60s revealing that they have encountered problems when trying to convince their elderly parents to say yes to help. Sharing her story on Facebook Tricia Murray wrote: “Well, I’m my 91-year-old mum’s carer and it was a slow process of getting her to accept help but she has begun to realise her limitations, it’s just a matter of time and patience on your part.”

While Ann Robson claimed perhaps she is the one who needs to accept it’s time for change writing: “LOL I am that person who probably needs help and I have a cleaner and for the rest, keep your distance.” Although adult kids have the best intentions when offering or suggesting extra support for their mums and dads, Shaw said the elderly must have some responsibility in what goes on in their lives to ensure they still enjoy life and feel valued in society.

She explained it’s all about compromise and instead of charging in demanding change, family members should take it easy and encourage the elderly to spend time focusing on their own hobbies instead of doing the jobs around the home that could cause strain on both the body and mind. “Ensuring that everyone can do as much as they re able to is very important, and the elderly will themselves not want to become useless,” Shaw told Starts at 60.

“They end up with no news to share, no experiences to bring to conversations. Of course they can also be afraid of what deterioration might mean, especially if they fear death and so denying that anything is wrong can be a part of that.” She added: “Some relatives, instead of ‘walking with’ can tend to ‘walk over’ and tell their elderly relatives they are ‘not up to it’ and ‘aren’t coping’ which can lead to defensiveness and shame. Worried relatives can take over, which diminishes their relative even more.”

For this reason Shaw suggested easing into the conversation slowly and not bombarding the elderly with demands. She said instead of claiming they can no longer take care of themselves anymore, tell relatives by accepting people to assist with small jobs, it will free up time for activities they actually enjoy.

“What is important is talking respectfully with the elderly person about their independence and how to be able to keep doing as much as they can for themselves and how some help here and there could assist with more energy and time for other things,” Shaw explained. “Not that they need to rest, but that they might want to spend more time on other hobbies and activities for example if the housework is done for them.”

On the other hand, for those who are caring for a loved one who is unable to look after themselves and don’t want to enter age care she said linking them with an organisation such as Carers NSW is useful. Shaw said hearing from other carers and the guilt and hardship and the need for healthy breaks can work better than relatives trying to win them over.

Meanwhile, the expert also noted services such as “Let’s Talk” which is offered by Relationships Australia for family members and the elderly themselves, and provides assistance in having those difficult conversations about life stages. “Some conversations such as care planning and power of attorney for example, can bring up long standing family issues,” Shaw explained. “They are sensitive subjects that no one is familiar with and the stakes can seem very high.”

Have you ever had difficulty getting an elderly relative to accept help in the home? How did you go about convincing them it was the right option?