Of all car models on sale in Australia, only one gets 1-star safety rating 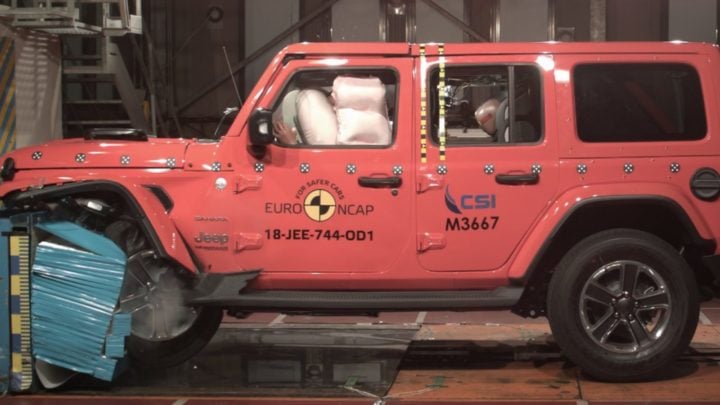 The 2019 Jeep Wrangler in a frontal collision at 64 kilometres an hour. Source: ANCAP

The Jeep Wrangler’s woeful one-star Euro NCAP crash rating announced late last year has been carried over for Australian versions by affiliated local test body, ANCAP, despite indications that our versions might get some safety-minded improvements.

Of the 236 currently on-sale models with published ANCAP scores, the Wrangler is the only offering with a one-star result. It joins discontinued models with the lowest score such as the Proton Jumbuck and Mitsubishi Express van. The next-worst extant performer is the Great Wall Steed ute, which managed two stars in 2016.

The result comes despite the standard fitment of dual frontal and combination side airbags which protect both the chest and head of front seat occupants, though head-protecting side airbags are not offered for rear seating positions.

The four-door variant with a diesel engine was tested but according to ANCAP, ”the safety performance of two-door and petrol engine variants is not expected to be significantly different … and this ANCAP safety rating therefore applies to all Wrangler variants”.

The MY19 Wrangler’s result is all the more glaring given the previous-generation Wrangler scored a four-star result in 2012, though that’s more down to the evolution of ANCAP’s testing regime, which becomes more stringent most years. Still, if there are any improvements there we’re not sure where to find them …

While ANCAP chief executive James Goodwin’s criticism was measured in the press release – “the safety performance of the Wrangler is limited, falling well shy of the expected standard in three of the four key areas of assessment” – his stance was firmer when we reached out for further comment.

“This is a very poor performance, fundamentally structural,” he said. “For a new model to have an unstable passenger cell, where the dummy has made contact with the A-pillar, with the dashboard… [it’s poor],” he said.

“One of the other things we’re seeing here is that the footwell ruptured, comparing it to the previous model we were not seeing any of those sort of structural problems occurring.”

“It’s unfortunate that the vehicle hasn’t improved in a generation and I think the other concerning thing is we’ve had the brand tell Australian consumers they were going to make improvements and it was going to be better than the European model tested last year, and we haven’t seen any evidence at all.”

Goodwin said ANCAP was anticipating a need to conduct some crash testing here with this in mind, rather than simply mirroring the Euro NCAP result, which has the same protocols. However, local versions were deemed to be the same as overseas versions when it came to crash safety after all.

“So, what we’ve done is republished the Euro NCAP result,” he added.

Digging into the crash report is interesting. Likely the most important metric for the driver is ‘Adult Occupant Protection’, testing for which comprises a frontal offset impact at 64km/h, full-width frontal and side-impact tests at 50km/h, an oblique pole test at 32km/h and a rear impact protection test. Said report states the following:

“The passenger compartment of the Jeep Wrangler did not retain its structural integrity in the frontal offset test. Connection between the A-pillar and the cross fascia beam was compromised, as was the footwell structure, and penalties were applied.”

“Rearward displacement of the pedals was excessive and, in combination with the footwell rupture, protection of the driver’s feet was rated ‘marginal’.”

“An autonomous emergency braking (AEB) system is available on some variants, however this system is not standard equipment and was not tested.”

Discussing the ‘Vulnerable Road User Protection’ results, the report added: “The bonnet of the Jeep Wrangler provided ‘poor’ or ‘adequate’ protection to the head of a struck pedestrian over most of its surface. Protection of the pelvis was ‘good’ at all test locations”.

“Protection offered to the legs was mixed, with areas of ‘good’ and ‘poor’ performance. Autonomous emergency braking (AEB) is available on some variants of the Jeep Wrangler, however the system is not standard and is not designed to react to vulnerable road users such as pedestrians and cyclists. The system was not tested.”

“Safety is something we take incredibly seriously and every other member of the Jeep family of vehicles wears a five-star safety rating with pride, whether tested by ANCAP in Australia or by Euro NCAP.

“The new Jeep Wrangler is a specialist off-road performance vehicle that has more than 70 advanced standard and available safety equipment. This includes front and side airbags, blind-spot monitoring, rear cross-path detection, parking sensors, a rear-view camera and autonomous emergency braking, all of which are paired with the use of high-strength steel in the Wrangler’s construction designed to protect the cabin in the case of an accident.

“The Wrangler also meets federal safety requirements in Australia and is compliant with Australian Design Rules (ADR), the national government standards for vehicle safety, anti-theft and emissions in Australia.”

How important is driver and passenger safety when you choose a new vehicle? Would a poor ANCAP rating put you off a model you previously fancied?