You’ve never really quite made it in life until you’ve owned a Rolls-Royce, and if you’re going to own such an iconic nameplate, it may as well be one that asks to be driven. It may as well be the Dawn.

The best way to tell if the economy is going well is to look at sales of high-end vehicles, Rolls-Royce being the epitome of that expression. Based on that, the Australian economy is doing amazingly well, with the German-British company selling more cars here locally (in 2017) than ever before. But it’s not as simple as that, of course, and part of Rolls’s success comes down to special editions such as this 2019 Rolls-Royce Dawn Black Badge being reviewed here.

The Black Badge models bring about slightly more power and torque (442kW and 820Nm, up 22kW and 20Nm) from the 6.6-litre turbocharged V12, stiffer suspension, better brakes and steering, recalibrated transmission and throttle mapping, as well as plenty of black across the grille, boot lid and exhausts. But perhaps most notably, the Spirit of Ecstasy is now in gloss black – something that may have been unheard of a few decades ago.

Our favourite addition to the car, however, is the strangely labelled ‘low’ button near the gear lever that opens up the new sports exhaust for a more aggressive sound, which Rolls-Royce describes as ‘menacing bass-baritone’ that announces the owner’s arrival with ‘authority rather than hysteria’. 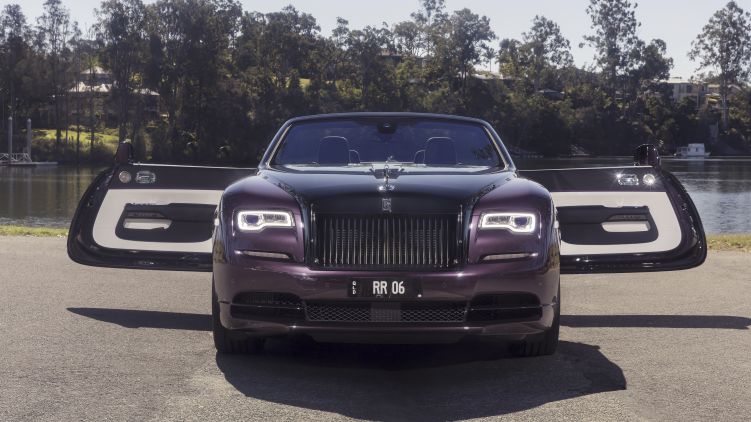 We suspect hysteria – in Rolls-Royce speak – is the sound a V12 Lamborghini Aventador makes. We kind of like that level of hysteria, but it’s hard to argue that pressing the ‘low’ button does bring about far more rumble and drama to the experience.

If you ignore all the black highlights, the new carbon-fibre composite wheels that help form a halo around the self-righting Rolls-Royce emblem will certainly grab your attention. They look expensive and they are, costing more than the price of a small hatchback. Each. So, it may make the folks at Qantas valet sweat just that little bit when this thing shows up.

The reason for the Black Badge editions is to allow the brand to remain relevant to younger buyers. Rolls-Royce may be an essentially limitless brand of outright desire, but when supercars from Ferrari and Lamborghini make such stronger visual and audible statements, the need to stay modern is absolute. So much so that the average age of a Rolls-Royce owner across the world has dropped – for the first time – to below 40. A fact that the company is truly proud of.

In fact, as Ferrari and Lamborghini rush to bring more entry-level vehicles to the market at lower prices, the desire for those that can to own something that others can’t, becomes even stronger. This is where Rolls-Royce can truly excel, for there are no pretenders buying a Dawn on a lease.

But ignoring the status that a new Rolls-Royce brings you, what can one truly think of the Dawn? 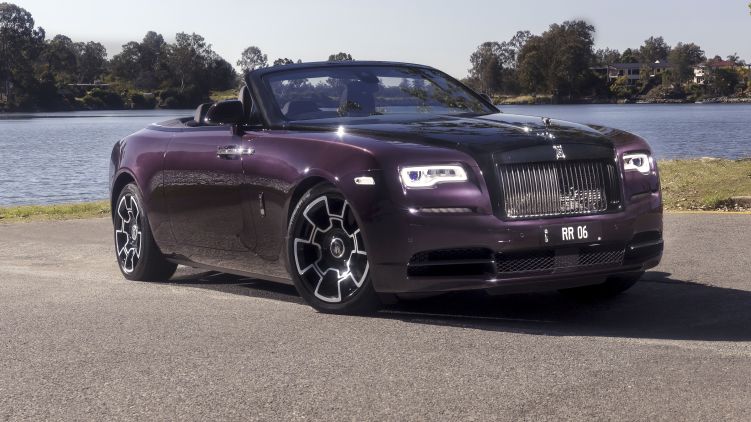 ‘A dreamer is one who can only find his way by moonlight, and his punishment is that he sees the Dawn before the rest of the world.’ Oscar Wilde may have spoken of a different dawn, but one can see that this car represents the dreams of so many that have earned (or inherited) the right to take possession.

Like all Rolls-Royce vehicles, the Dawn is a marvel of engineering and craftsmanship. It’s hard to know exactly what one should expect sitting in a car that costs $850,000 (this particular model, with all the options, tipped the scales at around $975,000) given the lack of competition, but it’s the customisation and the personalisation of the cars that make them special.

Our Belladonna Dawn, which is perhaps best described as a black and deep-purple colour that mutates depending on sunlight, was wrapped in some of the softest leather we’ve ever felt, which in itself was further highlighted by purple accents and stitching.

You cannot judge Rolls-Royce by its owners’ tastes, but this particular car would certainly stand the ‘taste of time’.

It’s interesting sitting in, and driving, a Rolls-Royce. There is no doubt it’s a magnificently built vehicle that employs the best of what the British brand has been offering with the latest in technology from the parent company, BMW. In that regard, the iDrive system and the head-up display are taken straight from the German’s parts bin and are easily recognisable as such.

Does it take away from the prestige? Perhaps for the most discerning of buyers, but we’d rather a super refined and highly iterated German infotainment system than one the Brits would’ve attempted to come up with themselves. In saying that, we drove a brand-new Volkswagen Polo to pick up the Dawn, and it put a smile on our face when we realised that the Polo had a clearer and far higher-resolution reversing camera than the nearly million-dollar Dawn. So, we feel the bits that Rolls-Royce has left to the Germans, do not live up to the standards that the company has reached with the rest of the car.

On the plus side, the super-bespoke audio system that Rolls-Royce has developed in-house is truly astounding. It uses two microphones that help determine the best way to adjust the audio quality when the roof is open. The company claims it has spent thousands of kilometres of testing just to tune the audio system, using music from the likes of Metallica to do so.

With the roof open, the Dawn is a magical vehicle to drive. It’s the cure to speeding, for while it has relentless power and torque and will make mincemeat of plenty of cars on the road if the situation requires it, the Dawn brings a sense of calm and assertiveness so that any desire to demonstrate its prowess feels entirely unnecessary.

It exudes a sense of outward excellence that no Ferrari or Lamborghini can ever dream to match. Its authoritative design encapsulates its occupants away from any thoughts of nouveau riche. Even if that is fundamentally and positively untrue for a modern Rolls-Royce owner …

Although Rolls-Royce says that it has stiffened the suspension a tad for the Black Badge models, it’s hard to imagine how, as the car rides like an air cushion over almost anything we throw at it.

It’s fast and effortless to drive, but weighing over 2.5 tonnes does bring the fundamentals of physics into play, meaning the Dawn tends to lean a fair bit into corners if you try to drive it like a sports car, which it truly is not. Does it get noticed? Unbelievably so. It turns heads wherever it goes, but not for its loud crackles and bangs as you’d get from the Italians, but for its form and beauty. The Dawn looks astounding today, and it will continue to look as such until the end of time. It’s a timeless shape, much like many Rolls-Royce vehicles have been in the past.

The Dawn is a true four-seater, for it feels as though there is more room in the second row of this car than there is in a standard BMW 7 Series. You can easily and happily transport four large adults in the Dawn with the roof open or shut, without issues. The comfort across all seats and rows is also hard to match – you can arguably fall asleep in the back seats, even with the roof open.

Ultimately, the Rolls-Royce Dawn Black Badge takes what is already an amazing vehicle that has no rival in terms of price or craftsmanship, and modernises it for a younger audience.

In an age when suburbs like the Gold Coast’s Sanctuary Cove claim the highest number of Ferrari registrations, the desire for the UHNWIs to own something that is truly bespoke and made to order has never been greater. And that being the case, no-one (bar perhaps Bugatti) offers what Rolls-Royce can create here.

Would you like to get your hands on the wheel on the new Rolls-Royce? Do you think the price justifies the car in this case?