Stylish and spacious: How the new Honda Civic weighs up against competitors

Despite slowing sales, the small-car segment is still one of the most popular in Australia, commanding a 15 per cent share of overall new vehicle sales across the nation.

While not one of the outright sales leaders, the Honda Civic has been a popular option for quite some time, currently sitting sixth in the sales race behind rivals like the Toyota Corolla, Mazda 3, Hyundai i30, Kia Cerato, and Volkswagen Golf.

The long-running nameplate has historically been one of the Japanese brand’s top sellers, so it was only fitting it received a recent model-year upgrade to make it more competitive in a rapidly improving segment.

Here on test we have the mid-range 2019 Honda Civic VTi-L sedan, which retails for $27,990 plus on-road costs. The brilliant sport blue metallic paint you see here on our tester adds a further $575. 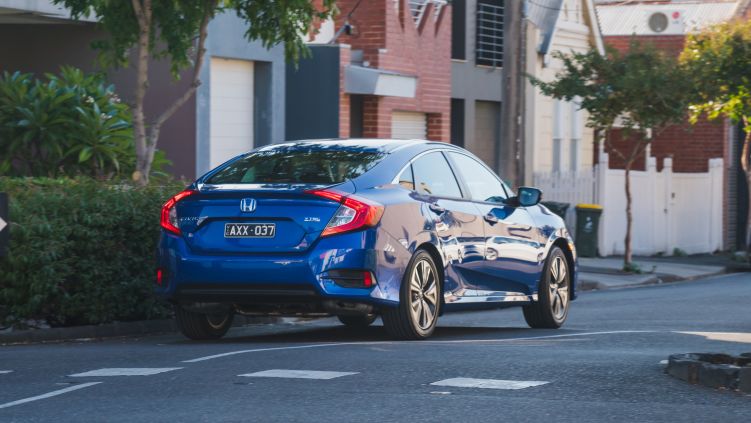 For no extra outlay over the outgoing model, the 2019 VTi-L picks up a much-needed active safety upgrade, which includes the addition of the Honda Sensing package – incorporating features like autonomous emergency braking, lane-keep assist, adaptive cruise control with stop and go and automatic high-beam.

While we praise Honda Australia for addressing a glaring omission from the Civic’s spec sheet, it’s a shame lower grades of the Civic still miss out on the potentially life-saving technology when pretty much all main competitors offer AEB as standard or at least as an option.

Regardless, the Civic range continues with a five-star ANCAP safety rating for all variants and body styles bar the Type R hot hatch, with a 2017 date stamp.

Opting for the VTi-L also gets a turbocharged 1.5-litre petrol engine, as opposed to the atmo 1.8-litre in lower grades. But more on that later.

In relative terms, the Civic VTi-L has a solid, if not earth-shattering spec sheet. The added active safety features at least make it much more competitive though.

Not much has changed in terms of the design with the visual changes being limited to the gloss-black trim for the front grille trim strip as opposed to the previous chrome and a new, sportier front bumper. The side mirrors, meanwhile, now also fold and unfold automatically when you lock/unlock the car. Fancy.

The Civic remains an edgy-looking small car and is probably a little sleeker in sedan form compared to the hatch – particularly at the rear. One of the Honda’s strengths is its interior practicality, and nothing has changed in that department, thankfully.

Up front there’s a feeling of airiness and space, with plenty of storage in the centre console. A notable mention is the huge cubby between the front seats, which also incorporates two cup holders.

The sliding centre armrest also doubles up as a lid and there’s plenty of space for leaving your phone, wallet and other trinkets. Standard-size bottles will fit in the door pockets, though the space there isn’t quite as cavernous as you might expect from a practicality-focused vehicle.

Speaking of your phone, you can store it on the shelf under the infotainment screen when plugged into the vehicle for using Apple CarPlay or Android Auto, but plugging it in can be a bit of a handful.

In an effort to hide the cables out of sight, Honda has put the USB cable in a cubby underneath the centre stack. The placement of the USB port is both difficult to access and difficult to see in poor light – not helped by the fact it has no form of illumination. While many owners will probably have a spare cable and leave it there to avoid fussing about, it’s certainly an annoying ergonomic quirk. 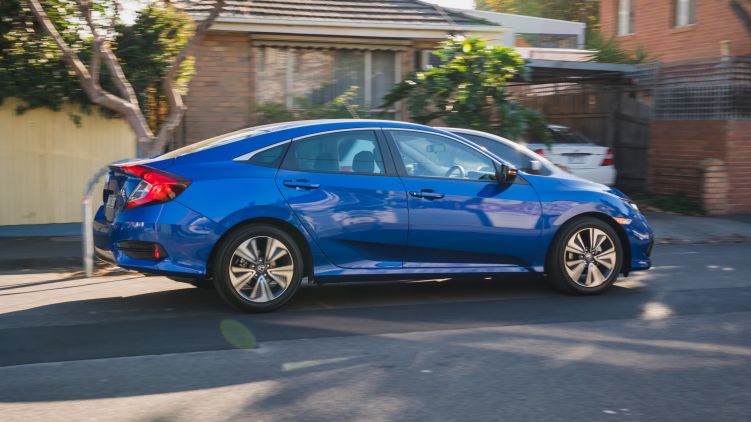 On the topic of infotainment, we also noticed a couple of bugs where it seemed to lack processing power when using Apple CarPlay. At times it would freeze during functions, or just take forever to read out a text message or dictate speech inputs as if there was a block between phone and head unit.

It works fine most of the time, though, and the new physical volume dial added for MY19 is a welcome change to the fiddly touch-capacitive controls of the previous model.

From a build-quality perspective, the Civic feels well screwed together, as any Honda should, though there’s a mix and match of trims and textures that don’t quite match up to the upmarket layout of the cabin.

Up top, the dashboard and front doors feature soft plastics that are nice to the touch and stay true to that more premium ambience, though further down there’s an abundance of hard, scratchy surfaces that look and feel cheap.

It’s a shame because the overall design and layout are quite attractive and modern, though some of the materials used detract from that perception of quality. We do appreciate the textile headliner, though and all the main areas where you’d rest a limb – like the centre console or the door cards – are lined with the same textile as the seats and have adequate padding.

Moving into the back, it’s pretty clear the Civic is one of the practicality leaders in the segment. There’s a good amount of room for two adults in the back, even behind a taller driver – though headroom can get a bit tight for tall passengers if they sit up really straight.

Amenities in the rear are limited to a fold-down centre armrest with two cup holders, and bottle holders in the doors. Unlike a growing amount of rivals, there’s no sign of air vents for second-row occupants, nor power outlets to charge mobile devices.

It seems like a relatively small omission, but rear vents come in really handy during Australia’s hot summer and you’ll always have someone riding along that asks you if they can charge their phone.

Parents can utilise the pair of ISOFIX child seat mounts on the outboard pews and there are three top-tether points across the back row.

Behind those seats, or under the bootlid, is a handy 517L luggage area, which is far more than any small hatchback. Unlike a hatch, however, there’s no quoted volume for when the rear seats are folded, and the space isn’t quite as tall and square compared to, say, the Civic hatchback with the second row folded forward.

Under the boot floor is a temporary space-saver spare wheel, which is on par with most rivals in the segment.

Meanwhile, the Civic’s on-road manners stand out in many areas – though not all are for the better. 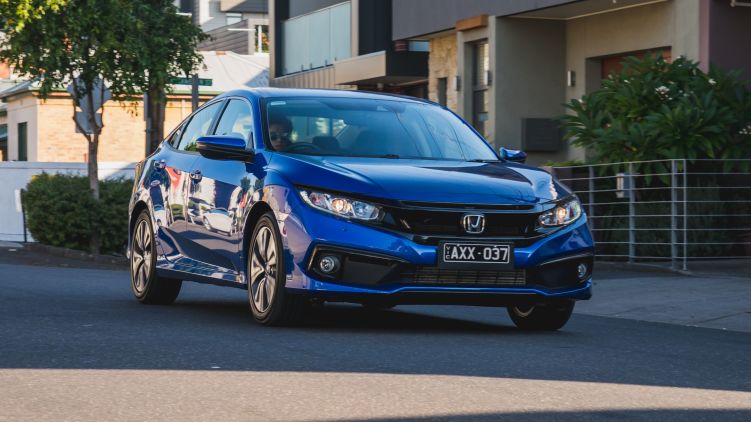 While those figures don’t jump out at you on paper, there’s plenty of pep to get you up and going at both urban and freeway speeds, with good levels of torque low down and a solid mid-range so it doesn’t feel like it runs out of puff quickly.

However, what isn’t so great is that CVT automatic, which slurs through its artificial steps and at times feels like it’s sucking the life out of the engine. It lacks refinement and just doesn’t really contribute anything positive, bar its ability to drop the revs quite low on the freeway to aid fuel consumption.

Speaking of fuel consumption, we saw an indicated readout of 8.7L/100km over 280km of mixed driving, which included several stints on the freeway stirred in with a week’s worth of peak-hour commuting.

We noticed the consumption figure drops very quickly when on the open road, and spikes up just as quickly as soon as you hit stop-start traffic. Unlike several rivals, the Civic lacks idle stop/start technology to reduce consumption and emissions when at a standstill.

For reference, Honda’s official combined claim is 6.0L/100km, and we’d argue you’d have to be doing mostly highway driving to get close to that. Given our indicated readout, you can expect a real-world range of at least 500km from the Civic’s 47L fuel tank. The turbocharged motor can run on regular 91RON unleaded, too.

Where the Civic really shines, though, is its ride and handling balance, which is pretty much just right. There’s a quickness and directness to the steering that is probably the most engaging this side of a Ford Focus, while the nimble and balanced chassis means cornering can actually be fun.

The Civic has a nicely low and wide stance to it, too, which gives off a sporty vibe in most driving situations, while also lending a planted big-car feel at freeway speeds that is confidence-inspiring on the open road.

What isn’t so inspiring, though, is the level of road noise entering the cabin, particularly over coarser road surfaces. It’s loud, echoey and just plain intrusive. And, it actually gets worse in the back.

It can be quite difficult to hold a conversation between the first and second rows, so if your kids in the back are saying “whaaaat?” when you’re saying something to them, it’s probably not because they’re deaf.

Finally, we really loved the plush ride that soaks up just about every imperfection in the road surface with little fuss, making the Honda a great urban companion as well as a fine tourer – provided you don’t mind the sub-par insulation from tyre roar. 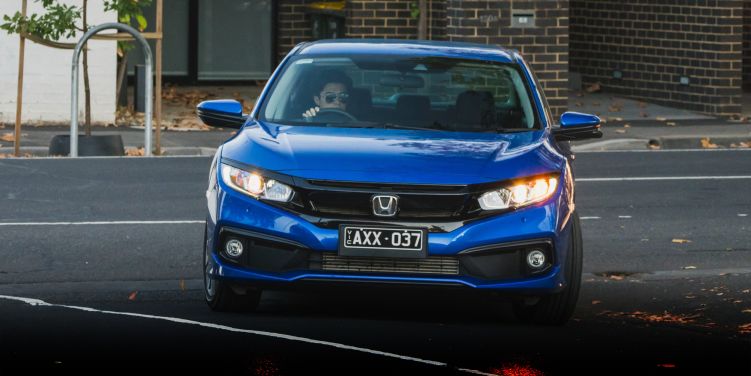 Items not included in Honda’s ‘tailored servicing’ price list are ‘adaptive’ items like fluids and filters, along with spark plugs and air cleaner elements.

While some don’t require changing or replacement until the 60,000km or 100,000km intervals, the cabin and dust pollen filter will set you back an additional $45 every 24 months or 30,000km, while brake fluid replacement asks for $54 above the advertised service price every 36 months.

The other main ‘adaptive’ item you’ll need replacing during the first five years of ownership is the HCF-2 fluid – or CVT fluid – which requires changing every 36 months or 40,000km, and costs $168 a pop.

The  2019 updates have really brought the Civic sedan back into contention with the leaders in the small-car segment. The Honda Sensing package for the VTi-L model and up is a much-needed addition, and for no price increase it’s worth calling out.

While adding the tech goodies, the Civic maintains what makes it great, namely its eager dynamics and fantastic ride comfort, along with its progressive cabin design and leading amounts of interior space.

However, the MY19 changes also fail to address other key complaints about Honda’s small car, including the lacklustre infotainment (despite standard smartphone mirroring, we note), lack of insulation from road noise, and certain cheap-feeling cabin elements that just don’t square up well against the likes of the new Mazda 3.

By no means is the Civic a bad car, but in an ever-evolving and ultra-competitive segment, it struggles to be a standout offering. In saying that, if you want a stylish, spacious and well-featured small sedan with a bit of go, the Civic is definitely worth a look.

What are your thoughts on the Honda Civic? Do you prefer it over its rivals like the Mazda 3 and Hyundai i30?