Car review: A brute Aussie ute for the next generation of tradies

Take a look at Australia’s new-car sales figures in 2018 (or just take a look around your neighbourhood) and the popularity of utes will come as no surprise. They’re everywhere you look, and even more popular than some passenger cars.

For 2019, the Ford Ranger sets itself up to continue infiltrating the market. While key rival the Toyota HiLux may have been Australia’s most popular car, the Ranger isn’t too far behind it in second place, especially comparing 4×4 models.

Where the 3.2-litre Ranger had a cubic capacity advantage (and thus a marketing and perception advantage) over the 2.8-litre HiLux, there’s now a wildcard into the mix with an optional 2.0-litre ‘flagship’ engine available in Ford’s big ute.

As a standard package, the Ranger XLT 4×4 double cab starts from $58,190 when equipped with the carryover 3.2-litre five-cylinder engine and a six-speed automatic. For an extra $1,200, though, buyers can upgrade to Ranger Raptor power. 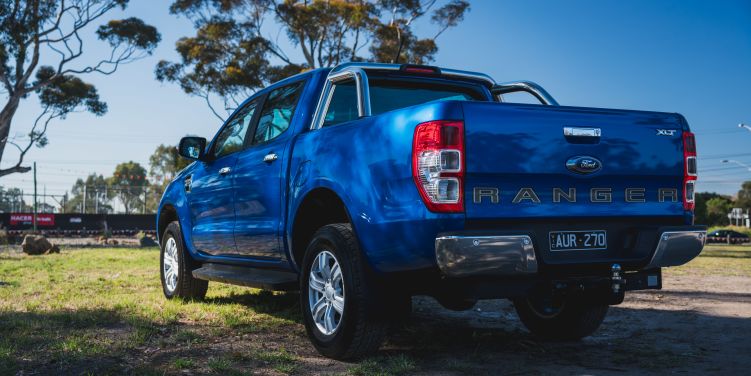 There’s a bit of a mindset change required – for the longest time, Aussie brands drip-fed the notion of ‘no replacement for displacement’ in locally built hero cars. As a side effect, utes now endure the same perception.

No-one seemed particularly thrilled with the Volkswagen Amarok’s 2.0-litre engine from launch, but now that a 3.0-litre V6 has joined the range it accounts for the lion’s share of sales. When the four-cylinder Ranger Raptor was announced, CarAdvice commenters called for blood … Or at least one of Ford’s more capable six-cylinder engines as fitted to overseas trucks.

While Raptor buyers aren’t offered a powertrain choice, Wildtrak and XLT shoppers are. You can stick with the 3.2 if you’re counting cubes, or upgrade to the new 2.0-litre to boost power and torque.

So, what’s the difference from behind the wheel? Perhaps surprisingly you won’t find an engine struggling to haul the XLT’s 2190kg kerb weight (15kg less than the five-cylinder, if you were wondering) as it should be for any engine upsell.

The new engine and transmission combo pays dividends not just in terms of acceleration – still no match for an Amarok V6, but respectable for the class – but also with regard to noise and vibration.

Ford includes tech like active noise cancellation for one thing, which helps lower background din on a steady cruise. Even with the accelerator pinned and revs in the top half of their range, the Ranger maintains a level of calm that escapes most other utes, including the older Ranger engine.

Now, before we hit that well-worn ‘sixty grand is way too much for a ute’ line, I’ll disappoint you further by letting you know the XLT trim grade is Ford’s most popular variant. It may not look as edgy as a Wildtrak or Raptor, but evidently $60,000 is the sweet spot.

You’re not leaving empty-handed for that, though, with a features list that stretches to front and rear park sensors, 17-inch alloy wheels, HID headlights with LED daytime-running lights, keyless entry with push-button start, and dual-zone climate control.

As before, and shared across most of the rest of Ford’s range, Sync 3 infotainment brings an 8.0-inch colour touchscreen with satellite navigation, Apple CarPlay and Android Auto, DAB+ digital radio and conversational voice control to simplify operation. 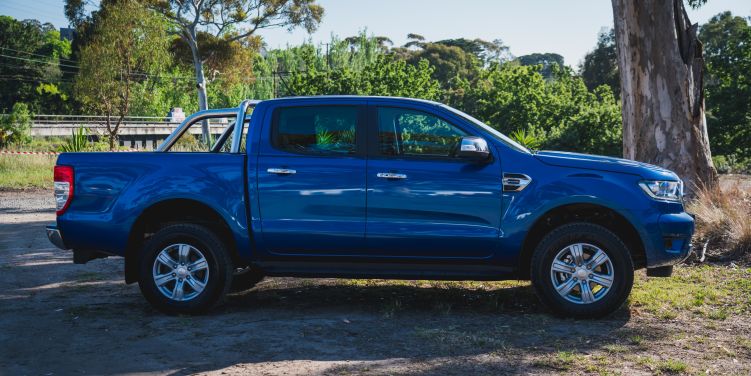 What’s it like on the road then? The new engine is quieter and smoother without a doubt, but there’s still no way you’d mistake the Ranger XLT for anything other than a work ute, albeit a fairly flash one.

The Ranger sits at the top of the dual-cab heap when it comes to all-round ability, with a respectably comfortable ride. There’s still some jitteryness and a little minor twitching from the leaf sprung rear when unladen, but add in gear (be it of the work or camping variety) and with an extra 100-plus kilograms to settle the back axle, the Ranger becomes all the more likeable.

The new 2.0-litre engine still won’t provide neck-fracturing acceleration, but from a standing start it’s much more eager over the first 50–100m of travel than the five-cylinder model.

A few things contribute to this – one being the sequential turbo system, with a smaller turbo for low engine speeds to bring boost on earlier and hold it until transferring to a larger turbo at higher revs.

The other is the rather nifty 10-speed automatic. Although engine torque is available over a narrower band, the wider spread of ratios and their closer relative spacing keeps the engine almost always in the flow-zone for its best possible performance.

All of this takes place without the driver ever really noticing. The engine operates much like any other; the transmission isn’t unruly and doesn’t hunt for gears. The remarkable thing about this complex drivetrain is how unremarkable it actually is.

In urban environments, there are still occasional moments when the transmission will pause for a moment before selecting a gear, and usually when rolling on and off the accelerator – think roundabouts and lower-speed slip lanes.

Similarly, within the confines of town, the Ranger isn’t always ideal. It does drive well, but slow steering and a big turning circle result in compromised maneuverability. Pick your shopping centre car parks carefully. 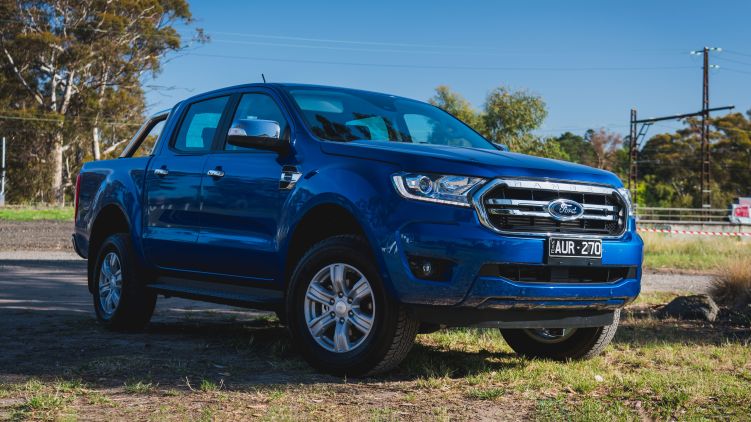 The Ranger’s previous four-wheel-drive tech carries over from before, allowing you to shift between two-wheel drive and four-wheel drive high-range on the go. A locking rear differential comes standard, along with hill descent control to help maintain steady progress when the going gets tough.

Multi-terrain selection with tweaked parameters to match the prevailing conditions remains the preserve of the Raptor and related Everest, but hasn’t made its way to the mainstream Ranger yet.

Traditional low-range and a rear locking diff will get you through most muddy tracks or fire trails without the need for recreational off-roaders to upgrade standard spec too heavily. A full off-road review is coming up in future, so keep an eye out for that.

On the inside, 2019 updates are less noticeable than the revised grille and bumper and new wheel design of the outside. Ultimately, there’s not too much wrong with the design and finish of the Ranger XLT, though.

The interior is spacious and wide enough for three across the rear. Knee room in the rear seats is limited for taller adults, though not unusably so. Even with the latest batch of revisions, Ford has left rear seat air vents off the spec list, which rear seat travellers won’t love on a hot day.

Because the Ranger is a big beasty, any pre-teen members of the family might find it takes a running leap to hoist themselves into a seat, but the inclusion of standard side steps helps with secure footing – even for adults of average height.

Ford props the Ranger up with a five-year, unlimited-kilometre warranty and provides capped-price servicing at 12-month or 15,000km intervals (whichever comes first) tallying $2,300 for the first five visits.

Updates to Sync 3 maps are included for up to seven years, provided servicing is kept within Ford’s dealer network. Twelve months’ roadside is also added with each service at a genuine Ford dealer up to seven years.

Real-world consumption is likely to be as varied as the number of ways people use their utes. Mostly unladen and in mixed-conditions driving, fuel consumption settled at 10.2L/100km – more than a litre per 100 kays less than previous CarAdvice tests of the earlier engine, but still a way off Ford’s claim.

Do more city driving, or go everywhere with a full payload, and you can expect that to sneak up. Hit the highway more often and it’ll likely come much closer to the 7.4L/100km claim. 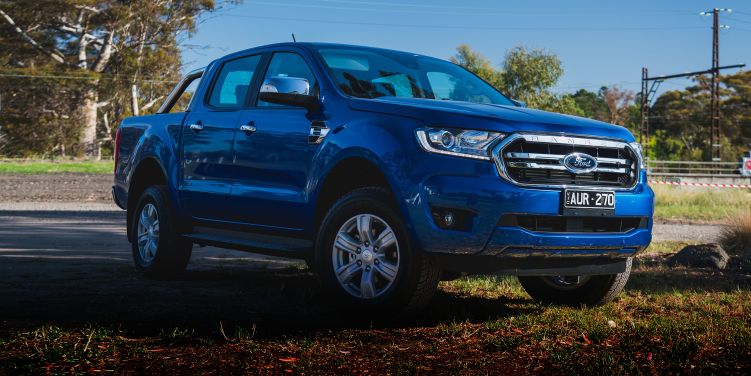 Although it may not be considered particularly high-tech, the Ranger still leads the 4×4 ute pack in some regards. Only a few utes come with autonomous braking tech (Ranger, X-Class and Triton), while features like driver-attention monitoring, radar cruise, and lane-keeping assist are almost otherwise unheard of.

You may have to pay more to get those tech items in the Ranger XLT, but you can get them. Best of luck trying to do the same with a Toyota HiLux, Nissan Navara or Holden Colorado.

Even the Ranger’s dual TFT-screen instrument cluster offers something no other segment competitor can match right now.

It’s no quantum leap into passenger car territory, but the Ranger bridges the gap between old-tech workhorses and contemporary safety expectations better than most other pick-ups in the class.

Traditionalists might baulk at a new, smaller engine, and the potential mechanical stresses it faces, but for casual users who aren’t demanding 10-tenths from their ute at all times, the improved fuel efficiency and quieter running will come as a welcome relief.

Better still, there’s no backwards step from behind the wheel. The new engine isn’t slower and doesn’t run out of puff, thanks to being smartly matched as a powertrain unit to Ford’s 10-speed automatic.

The market is now at a tipping point where buyers should start to expect the Ranger’s optional tech might have filtered onto the standard safety list, just like it has on passenger cars at half the price. Ford had an opportunity to take a segment-shaping position when it comes to safety, but hasn’t gone all the way.

Otherwise, the Ranger XLT continues to be a convincingly well-rounded package. Comfortable and quiet enough for daily use, well-mannered to deal with urban environments, but not afraid to roll up its sleeves and get to work.

Do you own a ute? Or have you ever owned one? Is this model up your alley?