Ford Focus Active: A car for those who can’t make up their mind

The 2019 Ford Focus Active has an identity crisis. And it’s one brought on by Ford itself. Ask any Blue Oval marketing executive to classify the Focus Active, and the response is a carefully rehearsed line, spoken verbatim: “It’s a passenger car with increased capabilities”. Push further, suggest even that the Active might well be a ‘crossover’ or a pseudo-SUV, and the response is the same: “It’s a passenger car with increased capabilities”.

Ford’s reluctance to classify the Active doesn’t, however, alter the fact it’s unashamedly a crossover. Based on the Ford Focus hatch, the Active sits higher on the road, and features tougher-looking exterior elements such as a skid plate at the front, a redesigned diffuser at the rear, and cladding around the wheel arches. Does it look like an SUV? Not on your life, but it is unashamedly a crossover.

Pleasingly, there’s just one variant of the Ford Focus Active (European markets get a wagon), and with a price of $29,990 plus on-road costs, it slots smack-bang into the middle of the wider Ford Focus range that starts with the Trend hatch ($25,990) and tops out with the Titanium hatch ($34,990). In between is the sporty-focussed ST-Line hatch ($28,990), or for those with a more practical side, the ST-Line wagon ($30,990).

The list of standard Active inclusions is, like the wider Focus range, pretty healthy, while the list of options is mercifully short. Standard for the Active is keyless entry, autonomous emergency braking, lane-keep assist and lane-departure warning, push-button start, and a rear-view camera. 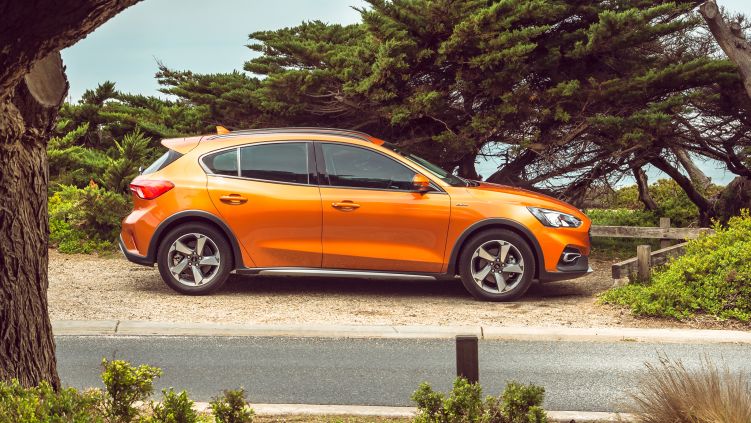 Inside, an 8.0-inch touchscreen runs Ford’s latest Sync 3 infotainment system with inbuilt satellite navigation, Apple CarPlay/Android Auto smartphone mirroring, DAB+ radio, and Bluetooth connectivity. Keeping your devices topped up is a cinch with a couple of USB ports in the centre console or, if you prefer, wireless charging.

Other options include Prestige paint ($650), although it should be noted that all but one of the eight-colour palette commands this premium. The only no-cost colour is, wait for it, Frozen White. There’s an $1800 Design Pack that adds 18-inch wheels (over the standard 17s), adaptive LED headlights with scrolling indicators and privacy glass. The only other option? $2000 for a panoramic roof.

Like the rest of the Focus stable, the Active is powered by Ford’s delightful 1.5-litre EcoBoost three-cylinder turbo, with outputs of 134kW (at 6000rpm) and 240Nm of torque (between a very user-friendly 1750–5000rpm).

Matched to an eight-speed auto sending drive exclusively to the front wheels, the Active can hustle from 0–100km/h in a claimed 8.7 seconds, all while sipping a claimed 6.4L/100km of unleaded. We saw an indicated 6.9L/100km – not a bad return.

While its identity might be in question, what’s not up for debate is how the Active drives and handles. Yes, it sits higher than the standard hatch (by 30mm at the front, 34mm at the rear), offering greater ground clearance, but that elevated stance hasn’t impacted dynamics.

The 1.5-litre three-pot is a willing little thing, especially with peak torque available at just 1750rpm. There’s a real sense of urgency from the Active, moving away from standstill briskly and effortlessly. Rolling acceleration, too, is genuinely pleasing, the Active at once sharp and responsive while the three-cylinder EcoBoost offers an endearing rumbling thrum in a way only a three-pot can.

The eight-speed auto, too, works away effortlessly, selecting the right ratio for any given moment. It’s unobtrusive in its application, smooth-shifting with seamless transitions. Switching over to paddle shifters to control your own transmission destiny doesn’t bring the rewards you might imagine; the lapse between hitting the paddle and the transmission responding erring on the glacial side of sharpness. 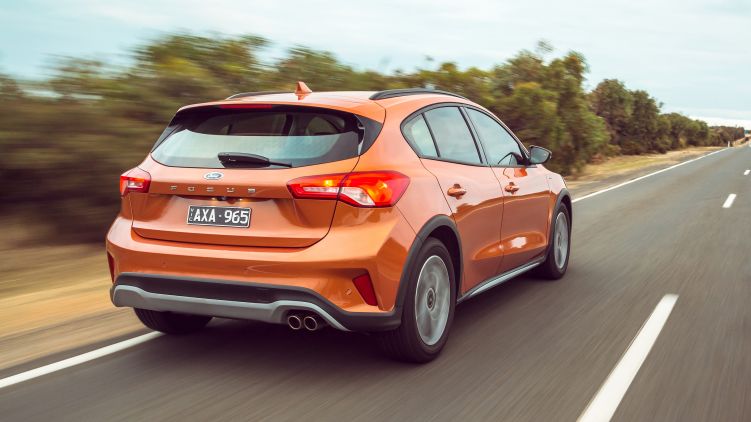 The Active sets itself apart from the wider Focus range by sporting multi-link independent rear suspension under its hind haunches. It’s a set-up shared only with the ST-Line wagon, with all hatch variants in Australia riding on a torsion beam set-up at the rear. That’s not to say the more rudimentary set-up is bad – it isn’t – but the IRS in the Active brings with it another level of refinement.

There’s an assuredness under wheel, no matter the situation. Cruising motorways at 110km/h, the Active remains calm and composed. NVH levels are at an acceptable level, the cabin remaining isolated from the worst of the highway symphony. There is a maturity to the way the Focus handles those minor blemishes so common on our highways.

Ford says this is down to Active-specific multi-compound bushes at each corner featuring “different stiffness characteristics when stressed in different directions”. Ford says this not only helps improve NVH (to the naked ear, it does), but also better isolates those road imperfections.

Tackle the rougher stuff via some Byron Bay hinterland country roads, and the Active acts with aplomb. There’s a real sense of confidence in its ability, with even mid-corner bumps and lumps doing little to unsettle the “passenger car with increased capabilities”.

And, despite sitting higher than its hatch brethren, the Active proves dynamically adept, tucking into corners with glee and surety while the three-pot sings happily for its supper. It’s hard to imagine, but the Active actually brings a smile to your face, linking corner to corner with enough mojo to offer mild thrills while not breaking the licence-busting bank.

There are drive modes to toggle through, if you desire, from Eco (avoid) to Comfort (default) and Sport. That last mode sharpens throttle response, adding a little pep to the Active’s step. It’s not a massive difference, although listening to the three-cylinder turbo hold onto revs a little longer is grin-inducing.

In addition, to live up to Ford’s “increased capabilities” claim, the Active features two further driving modes: Slippery and Trail.

Slippery, as the name suggests, is best saved for surfaces with reduced grip, such as snow, ice, grass or gravel. It reduces straight-ahead wheelspin while throttle response is eased off, helping the Active maintain traction in tricky conditions. We didn’t try this at launch, with perfect weather and nary a snowflake to be seen. 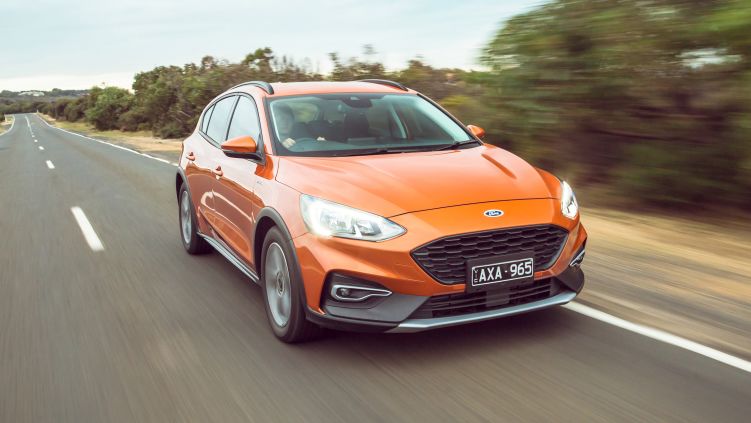 It works, too, with the Active dispatching a stretch of very soft, and very deep, sand pretty easily, front wheels spinning freely and the rear end offering enough slip to find the path of least resistance.

Would you drive it on a beach? Hell no, but it is competent enough to tackle sandy patches should you be faced with such an obstacle.

Inside, the Active is hard to distinguish from its Focus siblings. There are Active-branded kickplates inside the doors, while the interior cloth trim is finished in contrasting blue stitching. So, too, the leather-wrapped steering wheel.

The overall ambience inside the Focus Active is contemporary, with nice materials used on the touchpoints, while a rotary-dial gear selector is nicely damped and tactile. Personally, I prefer a more traditional gear lever, but Ford’s effort is a decent one.

The front seats are comfortable enough, with four-way manual adjustment including lumbar support, while storage options are decent. The wireless charging pad proved hit and miss, my smartphone sliding around on the rubberised surface, moving from within the charging zone to outside it, each move accompanied by a charging/not-charging status message on the 8.0-inch touchscreen. It became annoying, to the point of removing the phone from the pad and stowing it in the centre console bin.

That said, Ford’s Sync 3 system is a gem, with fast response times to inputs. It’s not the last word in graphic crispness, but it makes up for that with an easy-to-use interface, at once logical and intuitive.

There’s dual-zone climate control up front, although back-row passengers miss out on pretty much everything – no cupholders, no armrest, fold-down or otherwise, no air vents, no USB outlets. There’s just a single 12V plug for those desperate to charge devices in the rear. 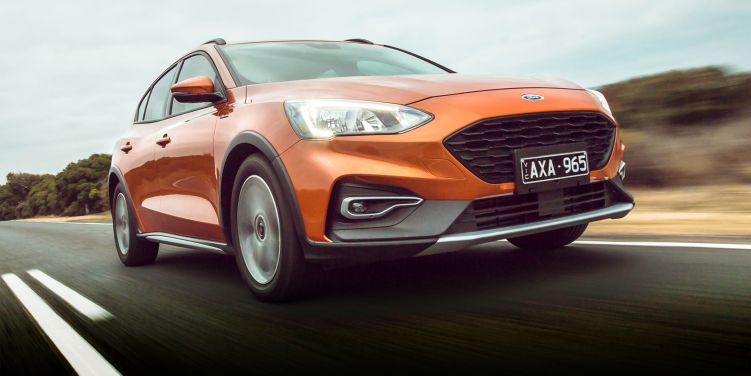 Conveniences notwithstanding, it is a decent-sized back row, with plenty of toe, knee and leg room. Head room, too, is perfectly adequate.

The boot is a decent size, coming in at 375L with the back row in use. That expands to 1354L with the rear seats folded. There’s a space-saver spare under the boot floor.

Ford covers the Focus Active with its now standard five-year, unlimited-kilometre warranty, while capped-price servicing will see owners pay a reasonable $299 maximum per service for the first four years or 60,000km, whichever comes first. Like the wider Focus range, the Active wears a five-star ANCAP badge awarded in December, 2018.

Whether buyers will be drawn to the Focus Active’s pseudo-SUV styling remains to be seen, although if the sales success of Mazda’s CX-3 is any indication (which is only outsold by the more conventionally styled Mitsubishi ASX in the segment), there is a certain appeal in a high-riding hatch that looks more capable than its lower-slung siblings.

The Ford Focus Active certainly fits the bill – a sharp-looking hatchback sitting higher on the road, and brimming with enough tech to satisfy most. That it matches those style- and tech-focussed trimmings with an enjoyable and engaging drive experience, at once refined and willing, should be lauded.

Yet, the wider Focus range has never enjoyed the sales success of its similarly priced rivals in the segment, but with the Focus Active, Ford may well have hit the sweet spot. Just don’t call it an SUV. Or a crossover.