The clock has just ticked over three hours since I first jumped behind the wheel of this MX-5 RF, before I pull over to jot down a few notes. It’s been raining the whole time, and while I’d normally be asking a greater power for a break in the weather, the inclement conditions haven’t dampened my enthusiasm for Mazda’s tiny targa-roof coupe.

Funnier still, this particular MX-5 isn’t the enthusiast’s Holy Grail manual model, rather the six-speed automatic variant. Despite that, it’s still fun. Yes, fun, and no, I haven’t gone temporarily mad, thanks for asking.

Even though the MX-5 RF is the plusher, more grown up drop-top in Mazda’s range alongside the more free-spirited MX-5 Roadster, that doesn’t mean the company has done a full about-face. It’s still light, still lovely to steer, and still infectiously entertaining. It also happens to be more secure and refined with the roof up, which is no bad thing.

For 2018, the Japanese company has changed a few details here and there, mostly on the Roadster that picks up suspension changes first applied to the RF, along with a bit of extra sound deadening. Lovely. 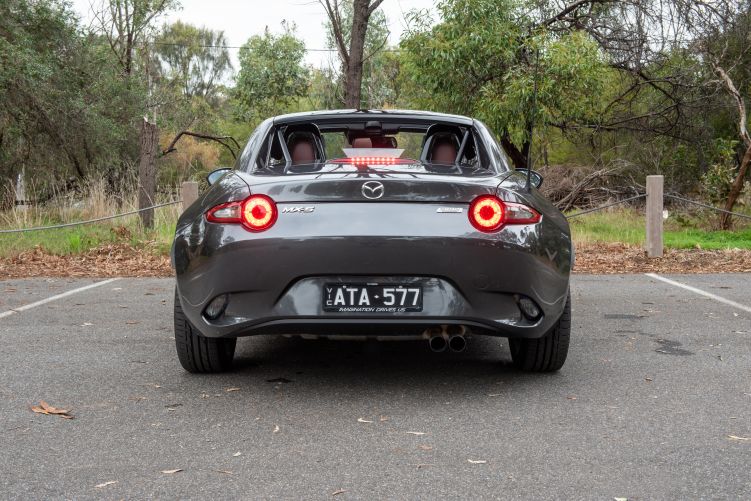 Changes to the RF are less pronounced, nonetheless, the RF GT picks up adaptive LED headlights and lane-departure warning bolstering its safety credentials, though autonomous braking and a rear-view camera are still missing from the standard features list.

There’s no news under the bonnet either. As before, you get a naturally aspirated 2.0-litre four-cylinder engine that delivers 118kW at 6000rpm and 200Nm at 4600rpm. Those aren’t supercar specs by a long shot.

They are, however, perfectly adequate figures for a lightweight sports car, particularly if you buy into Mazda’s belief that the connection between car and driver is more important than 0–100km/h times.

That connection is only enhanced by absolutely lovely steering – light but hugely informative. Right down to the thin-rimmed wheel, there’s not a thing about the MX-5’s steering that needs to change.

The same holds true for the suspension. It’s not rough or needlessly firm, but leans through corners in such a way as to enhance the feeling of speed. That’s not the needlessly floppy kind of roll either, rather it is one of the many ways the MX-5 files its dossier of information to the driver.

Get liberal with the accelerator and the 2.0-litre engine, free from the baggage of a turbocharger, is happy to climb the upper reaches of its rev range too. It’s rewarding rather than tedious, and even though the base engine is shared with the humble Mazda 3, detail changes make this the sweeter application.

If you’re mindful of such things, Mazda claims official fuel consumption of 7.4L/100km, and even with some fervent mountain road driving (but only a little city traffic), we bettered that claim with a return of 7.2L/100km… That doesn’t happen often. 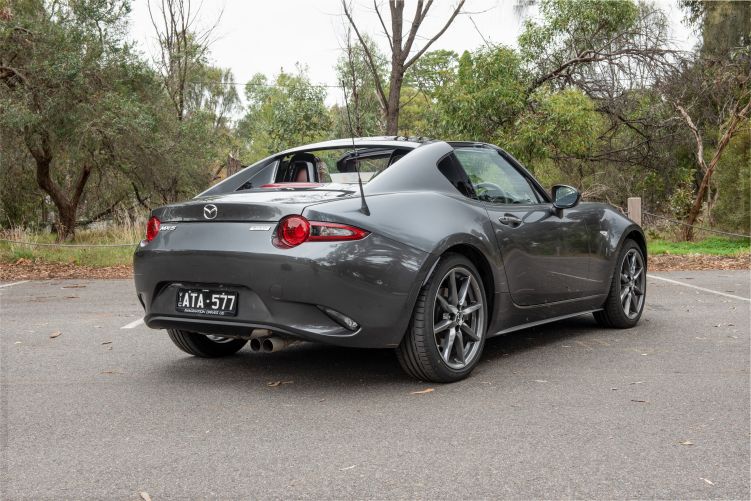 Back to those three hours spent splashing about in puddles on Yarra Valley roads to the north-east of Melbourne. The combination of predictable rear grip, progressive power and torque, and an attentive automatic transmission means fluent drivability, and no heart-starting crazy oversteer moments.

The six-speed auto, a traditional torque converter type rather than a dual-clutch unit, allows the MX-5 to be gently driven around town as smoothly and effortlessly as a Mazda 3.

Flick the ‘sport’ switch on the centre console and the transmission becomes more alert, holding gears until higher in the rev range, although without completely crisp upshifts.

For those occasions when the weather is more conducive to dropping the top, the RF doesn’t quite feel as open as its soft-top sibling, with the rear roof frame remaining in place. The change also means that as speed rises, so too does wind noise.

Roof operation is limited to speeds of just 10km/h, meaning you won’t want to get caught short with the roof half-up at a changing set of lights. It’s a procedure best carried out with the car safely stationary.

Once the roof is raised, the cabin is more quiet on the go than the MX-5 Roadster, however it’s by no means whisper quiet. There’s still plenty of wind, road, and particularly buzzy engine noise to be heard depending on the conditions.

Even though Mazda promotes the RF as the more refined member of the MX-5 family, the lightweight ethos of the original car still shines through. That’s no bad thing, but it pays to remember this isn’t a high-end luxury GT. 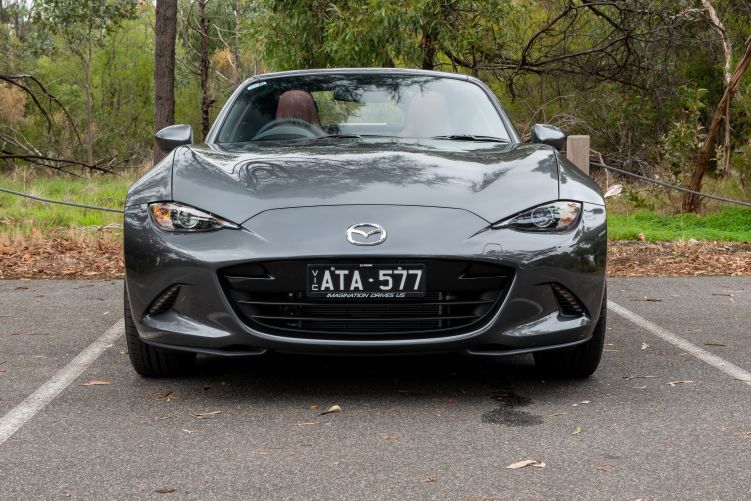 If you do decide to park an MX-5 in your driveway, Mazda’s capped-price servicing means you’ll pay $1,606 over the first five years of ownership at 12-month or 10,000km intervals, with service costs alternating between $304 and $347 per visit. Warranty coverage spans three years with no kilometre limit.

Make no mistake, though, the MX-5 is never going to be as plush as something like convertible versions of an Audi A3 or BMW 2 Series, and that’s where the decision gets tricky.

At $48,210 for the RF GT Black Roof with an automatic, this particular MX-5 is right on the tail of an Audi’s cheapest drop-top, starting at $49,400, with an auto. With only two seats versus the A3’s four, the MX-5 is less practical, but the more secure hard-top is something of an attraction unto itself.

There are missing items, of course. Mazda still hasn’t added smartphone mirroring (Apple CarPlay or Android Auto) to its passenger car range in Australia, autonomous emergency braking hasn’t made its way to the MX-5 yet either, and somehow even a reversing camera remains an almost $520 accessory.

Practicality isn’t exactly an MX-5 strong suit either. Cabin storage is minimal (just a glovebox between the seats and small lidded console), boot space is a miniscule 127 litres, and the cabin itself is intimate for shorter folks, let alone those over the magic six-foot mark.

None of those things particularly make or break the MX-5 RF, although they are easier to forgive in purist rag-top models than they are in the more upscale RF variant. Given this car’s near $50K price ticket, there’s a reasonable expectation that it should offer contemporary safety equipment, and none seems valued more highly than AEB at the moment. 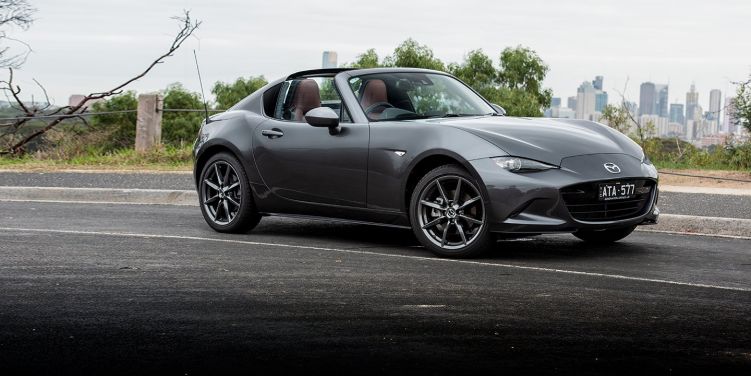 That does miss the point of an MX-5 as back-to-basics sporty fun, but the whole RF ideal is to create a more premium and mature sports car. Certainly, with its secure lid raised and the six-speed auto doing its thing in drive, the MX-5 RF is the most adult member of the current MX-5 range.

It won’t out-muscle the current crop of big-fun hot hatches, but none of those enjoys as intimate a three-way relationship between road, car, and driver. It won’t be all things to all people either, which is an intrinsic part of the MX-5’s allure.

It will, however, lead a happy double life as a calm and comfortable daily driver, yet capable of easing into a spirited gallop over a winding road at the will of the driver’s right foot. And will reward such behaviour with exemplary road manners, rather than biting back in anger.