The devil’s in the detail: A family car showdown between Mazda and Toyota

Could this be the family car battle of head versus heart? The Toyota Camry SL V6 and Mazda 6 GT turbo both stick to a well-worn medium sedan formula, although manage to avoid looking like carbon copies of each other – both aesthetically and mechanically.

Whereas the Toyota comes across as something of a salt-of-the-earth offering, thanks in part to its ubiquity on fleets, the Mazda cuts a more striking figure as a lure to private buyers seeking something more aspirational.

For this pairing, we’ve rounded up the top-spec Camry SL and its highest-output engine, a 3.5-litre V6, against the upper-mid-grade Mazda 6 GT and its new turbocharged petrol four-cylinder engine.

That sees price between the two at a perfect list-price match, although Mazda has a more expensive and lavishly equipped Atenza spec level higher in the range that Toyota can’t quite match up to. 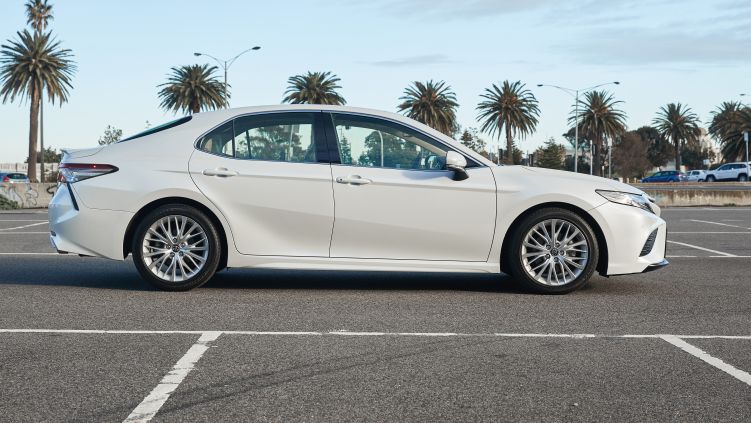 Although the pairing may have seemed less likely a generation ago, Toyota has made a massive leap forward in the Camry’s presentation and equipment. Base-model cars will still appeal to fleets around the nation, but private owners will find more to like in higher-grade cars, including the reintroduction of a V6 engine.

Mazda, meanwhile, has expanded availability of the CX-9’s turbo petrol engine and created a more authoritative performance halo for the top of its range, to go with the near-premium look and feel already inherent in the 6.

Both the Camry SL V6 and Mazda 6 GT turbo kick off with list pricing of $43,990 plus on-road costs. In the case of the Mazda, a $1100 more expensive diesel is also available, while the Camry SL has less-expensive petrol-electric hybrid ($3000 less) and four-cylinder ($4000 less) variants available.

Instrumentation is via traditional gauges and a small TFT display in the GT, while the SL puts a larger 7.0-inch display between its speedo and tacho dials. Both include colour head-up displays projected on the windscreen.

Infotainment in each is delivered via 8.0-inch touchscreens preloaded with AM/FM/DAB+ radio, satellite navigation, and reversing camera display. Mazda also includes a secondary rotary controller on the centre console to allow on-the-go adjustments with less distraction.

Disappointingly, neither has smartphone mirroring (either Apple CarPlay or Android Auto), but the tide is changing at both brands, so the technologies look likely to be added at a later stage. Mazda has announced its system will be retrofittable, but Toyota has yet to make a similar announcement.

Five-star ANCAP ratings cover both cars, with Toyota’s awarded in 2017 and Mazda picking up its rating in 2012, although updated safety tech added throughout its model cycle has kept it up to date.

As high-grade models within their respective ranges, the Camry SL and 6 GT deliver the range of fittings, fixtures and finishes you’d likely expect.

With leather trim standard in both, along with powered front seats, dual-zone climate control and the like, there’s a suitably premium equipment list in both.

Although the Mazda’s design is the oldest of the two, a 2018 revision sees a new dash design keep up with modern expectations. Switchgear has a nice high-quality heft, metallic trims throughout the cabin have a solid look and feel, with the styling generally coming across as understated and elegant. 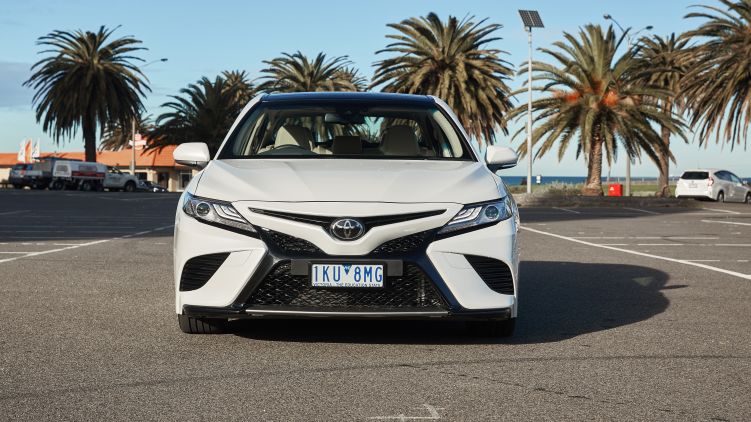 The Camry is the newest of the pair from a model-cycle point of view, but it’s possibly also one of the biggest changes to ever shake the Camry in recent times, taking the interior design from a fairly fleet-focussed flavour to a more daring and dramatic design complete with a dominating asymmetrical centre stack.

Personal preferences could drive your decision here: Toyota is certainly more adventurous this time around, but Mazda uses materials with a superior tactility. The 6’s formality echoes that of premium marques, while the Camry is the most youthful it’s ever been, but can appear less cohesive.

The Ivory colourway of the Toyota still feels very old-fashioned Toyota; however, black is available as an alternative if the multi-hued beige-on-tan look isn’t your thing.

Similarly, the Mazda’s Pure White interior choice is lovely to look at, and thoroughly contemporary, but would be a nightmare to keep clean. Again, a black option is available and is the suggested choice for family use.

Passenger space between the two is another area where personal preferences could steer you to one over the other. Drivers who prefer to sit a little higher will like the Camry, while the Mazda 6 has a low-slung and sportier driving position.

There’s superior head room up front in the Camry, though neither is short-changed, but whereas the Mazda has a naturally low roof from front to rear, the Camry has space to tuck its sunroof blind, making the rear seats of both a little less spacious than they could otherwise be.

Camry goes upmarket with manual sunshades on the rear doors (although the powered rear windscreen shade of generations earlier still hasn’t returned), and though the sunroof has a full-blockout blind, it would be nice if there were a possibility of ordering the car without a sunroof at all.

Infotainment systems of both are relatively simple to decipher, though Mazda’s user interface is simpler and the rotary controller on the centre console makes the system easier to control on the move, rather than trying to tap a touchscreen in a moving vehicle.

Neither system feels quite as modern as it should – high-definition mobile phone displays make these in-car systems look a little old and pixelated by comparison. That’s to say nothing of a lack of actual smartphone mirroring for either car.

If cargo capacity is a primary concern, Toyota touts 524L of boot space to Mazda’s 474L. It’s also easier to load the Camry with a larger boot aperture and lower boot floor. In the cabin, the Camry also claims the prize for larger door bins and a more generous centre console.

As closely matched as the Camry and 6 may be in terms of size and equipment, under the bonnet is where they vary the most.

Toyota, conservatively, sticks with a big naturally aspirated V6 for the Camry’s flagship engine option, and Mazda has created a turbocharged four-cylinder petrol engine that delivers torque more like a diesel. Both send power to their front wheels – Toyota via an eight-speed torque converter auto, while Mazda makes do with a six-speeder of the same type. 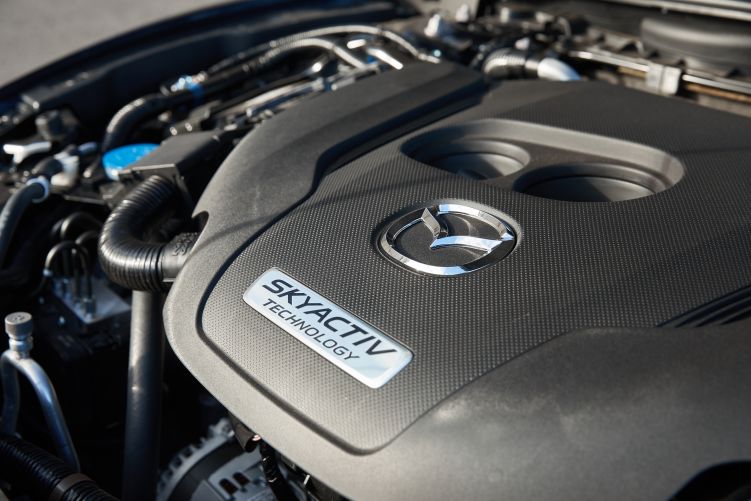 Toyota also specifies 95-octane premium unleaded, while the Mazda can happily get by on 91-octane regular unleaded with a minor bump in power if you use 95. Officially, the Camry rates fuel consumption at 8.9L/100km and the 6 at 7.6L/100km. On test, cycling both cars through the same conditions, the Toyota used 9.5L/100km versus the Mazda’s 7.8L/100km.

With two very different engines, the driving feel of the two is also different. Demanding drivers are sure to like the free-revving feel and lively top end of the Camry, while the more relaxed Mazda 6 is all about strong and smooth waves of torque.

The four-cylinder Mazda can’t match the peaky top end of the Camry, nor can it rev as hard, but with a steam train-like 420Nm of torque it never really needs to. While it may deliver its best at higher revs, even the Camry’s V6 is designed to push more torque at lower engine speeds compared to four-cylinder Camry variants.

Neither engine disappoints when it comes to refinement. The Toyota is whisper quiet almost all the time, while the Mazda offers a little more induction roar under load, though never to the point of sounding unsophisticated.

With a much higher peak torque figure, the Mazda is also able to lean on its pulling power, rather than working its six-speed auto unnecessarily. Comparatively, the Toyota’s eight-speed auto might look superior on specification, but it’s never as calm or settled, frequently hunting for the right gear, particularly in flowing urban traffic.

Punch either from a green light and neither feels sluggish or slow – praise that neither car would have deserved just 12 months ago, before the current crop of more powerful engines came online. The Camry feels as though it works harder to achieve its results, whereas the Mazda 6 is simply calmer but no less assured.

This newest generation of the Camry represents something of a turning point for Toyota, finally finding dynamic prowess of a level similar to that of the Mazda 6, which has long been held as something of a class benchmark.

Make no mistake, neither one is likely to deliver hot-hatch thrills, but both manage to flow beautifully when put through a series of corners, rather than just being fleet-focussed appliances.

Getting power down on dry roads poses no problem, though the Toyota and its higher RPM torque peak means it’s easier to get rolling before wheelspin interrupts the party. Add in wet conditions and the Mazda will spin an inside front wheel far more readily, but still avoids axle tramp.

The Camry has a lovely pliant ride, able to absorb most of the smaller lumps and bumps scattered across urban tarmac, although bigger hits can unsettle the ride by crashing through the cabin.

Steering takes a light and easy approach too – fantastic for tight quarters, but uninvolving as speed rises.

Back to back, the Mazda feels more tightly controlled over small surface imperfections – not rough, just a little terse. Find a rougher back road, though, and the Mazda remains much more composed, settled and confident, while keeping occupants isolated from the surface below. 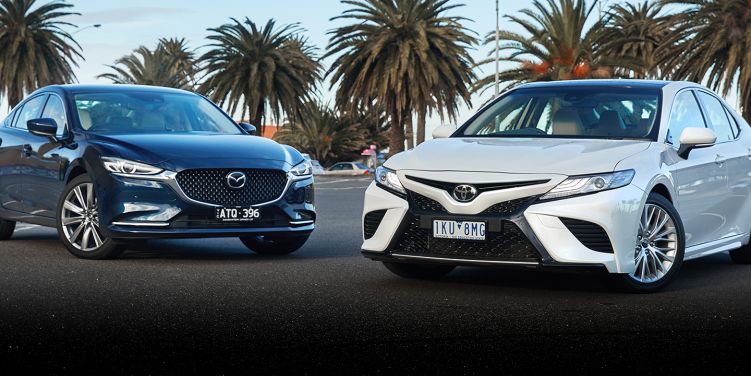 Communicative steering involves the driver, and even though there’s more steering weight it’s never under-assisted, making it easy to manage at anything from parking to highway speeds.

Although Mazda often cops criticism for road noise, work over the 6’s lifetime has seen that particular bug ironed out. Both are calm and quiet, but in this match-up the Mazda is more serene, with the Camry coming across just a touch louder and higher-pitched on the go.

Toyota’s capped-price servicing positions it as fantastic value with 12-month/15,000km service intervals capped at $195 per service for the first dealer visits, and adding up to $975 by the end of the capped-price program. Unfortunately, Toyota’s warranty support is a little off the pace at three years or 100,000km (whichever comes first).

Mazda has recently boosted its warranty to five years/unlimited kilometres, but servicing intervals sit at 12 months or 10,000km. Services alternate between $313 and $341 per visit, and by the end of five years the Mazda 6 turbo will accumulate $1894 in service costs.

As unlikely as it might seem at first, these two medium sedans are incredibly closely matched. There’s no clear loser, and no matter which you choose, you’ll pick a winner.

Because family functionality is a vital factor, the more practical and capacious Camry is likely to be a better companion for growing Aussie families with more boot room and an easier to load and more spacious rear seat.

Decisions of this nature really should be made as logically and analytically as possible. The cheaper service costs of the Camry and more lavish equipment list are sure to appeal to your inner accountant – and probably your actual accountant too.

The more emotive styling and more involving dynamics of the Mazda 6 GT turbo might speak to your heart, but – as unlikely as it might seem – the much improved new Camry is a quantifiably better family sedan.

Which car would you rather park in your driveway?