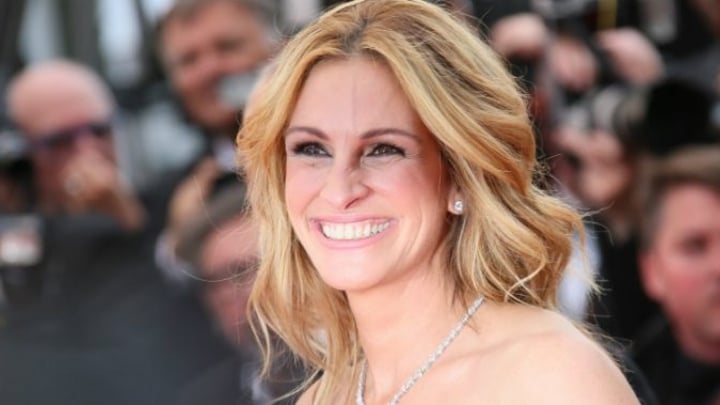 Julia Robert knows how to get attention, and it's with more than a big smile!

She was known as a pretty woman after starring in the movie of the same name, and now Julia Roberts has proven it again.

She made an appearance at the Calzedonia Legs Show in Verona, Italy, and she certainly had her own legs on show.

While promoting their line of designer tights she looked pretty in baby pink wearing a sh0rt retro collared dress by Dior.

She teamed the outfit with black boots and a matching black clutch, with black nail polish to boot.

With her hair down in loose waves she certainly looked  youthful.

The 49-year-0ld, also known for roles in Steel Magnolias,  Erin Brockovich and Notting Hill, feautres in advertisements for the Calzedonia and said they were great in letting her work about her family schedule.

Family seems to be keeping her busy, as she has been pretty quiet on the acting front of late.

Since Eat Pray Love in 2010 she’s appeared in one or two roles each year, including a TV series called Nature is Speaking, about climate change, and most recently was the voice of SmurfWillow in the animated movie Smurfs: The Lost Village. She’s just completed Wonder, playing the mother of a disfigured boy, and is next listed to be in the TV series Homecoming.

She’s also been named to feature in a Hurricane Harvey telethon, alongside George Clooney, Barbara Streisand and Reese Witherspoon, on September 12.

What do you think of this outfit? Did you ever wear something like this?