‘There’s nothing’: Grandparent carers break down as they plead for more support 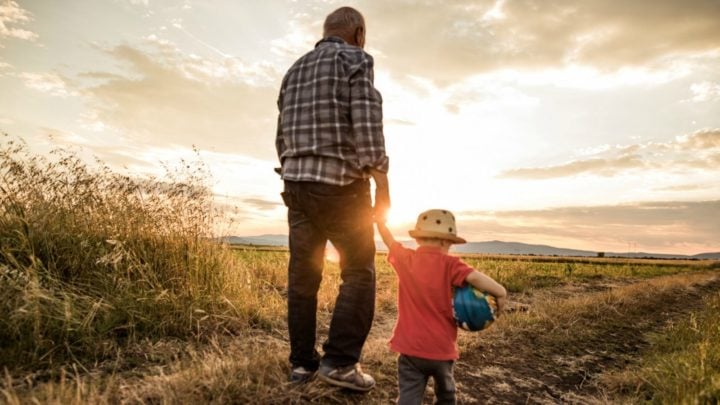 Many grandparents are full-time carers for this grandkids. (Picture posed by models). Source: Getty.

Being a parent is a full-time job in itself, but imagine having to relive it all over again years later when your own children have grown up and moved out?

Many grandparents in Australia are forced to step in and care for their grandkids in later life and it can have a huge and lasting impact on their lives.

Now as a new study – published in Australian Social Work – has called for more support, two grandparent carers have shared their own candid and moving stories on the radio, in the hopes of pushing for more help – both financially and emotionally.

A study by James Cook University found most grandparent carers “do not receive the support, resources, or clinical services required to meet their grandchildren’s needs, and they are less likely than foster carers to be offered training or respite care”.

“In 2017-18 year more than 159,000 children had an investigation, care and protection order, or were placed in out-of-home care in Australia. In the jurisdictions with available data,  50 per cent of children in formal kinship placements were living with grandparents, and it’s likely there are many more informal arrangements,” she said.

She added that while many other carers receive more support, the needs of grandparents – which may often by higher – are being overlooked.

“Grandparent kinship carers may need a higher level of support than other carers, in part because they are often less well-off than non-relative foster carers,” she added.

Gair said the study also found that there can be a certain stigma against grandparents after child protection concerns emerge, with some feeling they’re judged as “somehow responsible for what’s gone wrong” within the family.

Speaking about the findings on 2GB to hosts Natalie Peters and Edwina Bartholomew, two grandparents became emotional as they revealed how their lives have been taken over by caring duties.

Karen looks after her seven-year-old granddaughter full-time after getting legal custody. She explained that the girl’s father had died, while her mother was unwell and therefore unable to care for her.

“Any savings I had I’m dipping into all the time,” she admitted. “We’re lacking so much in our society… people are able to be on the dole and get money pretty quickly but for people like us that work full-time… I’ve never been on the dole, I’ve always paid taxes, I get absolutely zero support.”

More than the care itself, Karen admitted it also leaves you feeling “isolated” as she watches her friends travel and enjoy retirement while she is forced to be a parent again.

She added: “I can’t even begin to tell you how tough it is. You can’t be a grandparent to your grandchild, you have to be parents and it’s a very fine line.”

At this point she broke down and struggled to speak as she added: “There’s nobody that helps you.”

Hearing the emotional call, grandad Jeff also called in and admitted it resonated so much with him that he wondered if it was his own wife on the phone.

“There is nothing, you have no friends you have no life, there is no support,” he said, explaining that his own 10-year-old granddaughter is going through hormonal changes at the moment too which makes caring harder.

“Financial support would be great… but even having contacts or care assistance or somebody that you can talk to!”

Jeff said his daughter abandoned both of her children when they were just 12 months old, forcing them to step in as parents.

Council on the Ageing CEO Ian Yates spoke on the show too and told the hosts that grandparents need a mix of financial and emotional support.

“This is a problem that has been in existence for a long time and doesn’t go away,” he said. “The bulk of childcare in the younger ages is actually still done by grandparents.

“It’s about having access to some knowledge and it’s not always easy straight away to find that.”

Are you a grandparent carer? How has it impacted your life?