A chef’s secret to making delicious, authentic paella every time 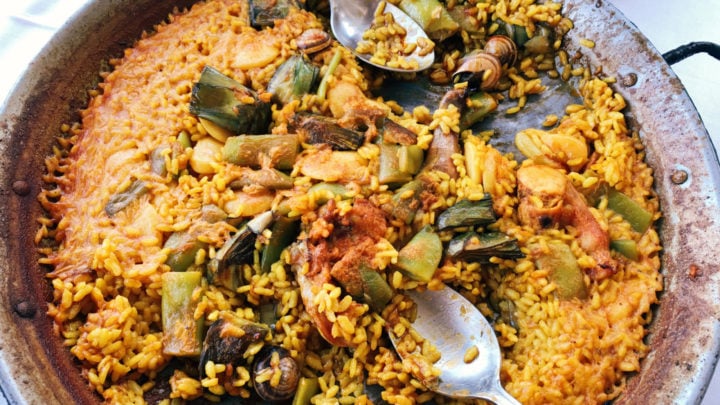 If you’re looking for a deliciously addictive dish that everyone around the table will enjoy, look no further than this all-time Spanish favourite. It’s fair to say paella has become a worldwide hit with the classic street food dish, which consists of short-grain rice, seafood or meat and vegetables, popping up in restaurants around the world.

Paella originated in Valencia on Spain’s southwest coast and like many great European recipes, was originally a peasant dish. It originated in the 19th century and was made with whatever ingredients were available at the time.

While paella is often regarded as being Spain’s national dish, there are many different interpretations of it. A Valencian paella will traditionally consist of chicken, duck, rabbit, snails, broad beans, rice and saffron. However, you can commonly see options with seafood, chorizo, peppers, peas and stock.

How to cook perfect paella every time

Paella is regarded as one of the hardest dishes to get right, but keeping a few tricks on-hand can make all the difference. When it comes to making an authentic paella, Robbins says there are a few key elements to keep in mind.

Using the right rice is key when it comes to making good paella. For the best results use a paella rice, such as Spanish calasparra rice, otherwise medium grain rice may be substituted.

The other important ingredients, of course, is the stock and the sofrito, Robbins explains. The sofrito is a mixture of sautéed ingredients, such as tomato, onion, garlic and fresh herbs, that adds a mild and sweet flavour to the paella base.

Finding a good pan is also an important element to making a great paella. The traditional shape of a paella pan allows the rice to cook evenly, which is essential for making a flavoursome dish. If you don’t own a paella pan use a 4-centimetre-deep, medium weight non-stick frying pan.

And when it comes to the cooking, Robbins says stirring is absolutely forbidden.

“This is where paella is made and broken,” he says.

In fact, mixing the ingredients together will stop the tasty crust, known as socarrat, from forming on the base. You can gently shake the pan instead to stop the rice from sticking to the base.

To create a crust take the pan off the heat when the rice has almost finished cooking and let the rice absorb the remaining water. This will allow the rice to continue cooking while the heat from the base of the pan creates a golden crust. Just be sure it doesn’t burn as this will ruin the flavours of the dish.

“You must let it sit for 15 to 20 minutes. Patience is very important,” Robbins adds.

Sound tasty? Here’s how to do it!

Have you made paella before?