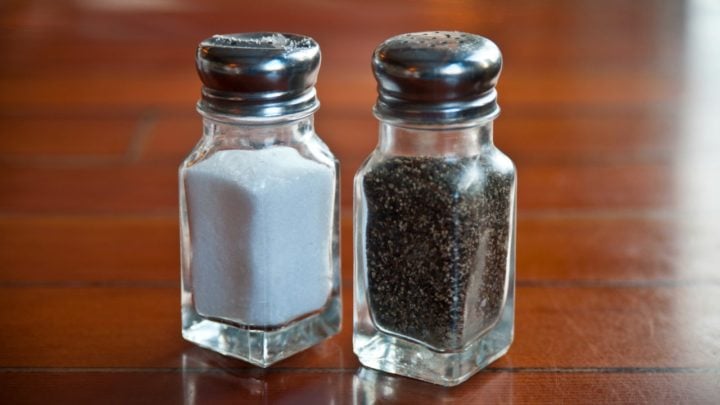 A number of salt and pepper products sold by the Community Co brand have been recalled. Source: Getty (stock image used)

Australians are being warned to check the salt and pepper in their cupboards after a nation-wide recall has been issued for a popular brand of the seasonings. On Thursday evening, a food recall was issued for a number of products sold by the Community Co brand after fears they had become contaminated.

Queensland Health explained in a statement that the Community Co Black Pepper Corn Grinder (50 grams), the Community Co Pink Himalayan Salt Grinder (115 grams) and the Sea Salt Grinder (115 grams) had to be pulled from shelves after a packaging fault resulted in the products possibly becoming contaminated with plastic fragments. If consumed, the plastic could cause injury and illness.

The three popular products are sold at IGA, Campbells and other independent grocers across the country and the entire stock has been impacted by the recall. People are being warned not to consume the products and to instead return them to the place of purchase for a full cash refund.

Anyone who believes they’ve consumed the faulty salt or pepper are encouraged to contact Metcash on 1300 505 637. Shoppers have been quick to share their own horror stories on Facebook, with one person writing: “This has happened to me, found a plastic piece in my sandwich. Then the grinder stopped grinding. Purchased from IGA.”

Another comment read: “Found plastic fragments in the Aldi brand of black pepper a couple of months ago,” while a third added: “Oops used one of these at a sports club today!”

The latest recall comes just days after popular deli meat pastrami sold at Foodland, IGA, butchers, continental delis, bakeries, cafes and sandwich bars across South Australia was recalled after listeria was detected in the meat. SA Health’s Acting Director of Food and Controlled Drugs Branch confirmed there had been no cases of Listeria infection reported to SA Health linked to the product.

“We received confirmation today that Conroy’s had detected Listeria during routine company testing of pastrami and are initiating a recall,” Joanne Cammans said on Wednesday. “While we have not received notification of anyone contracting Listeria from the product, the infection can be extremely serious if it is contracted by the elderly, pregnant women or people with weakened immune systems.”

Listeriosis is an illness usually caused by eating food contaminated by the bacterium listeria monocytogenes. The bacteria are widely distributed in the environment and can grow in food at refrigeration temperatures.

While uncommon, it can be extremely dangerous, particularly to pregnant women and the elderly. In many cases, listeria can be present in natural products without causing any harm. It can be difficult to diagnose as symptoms present at different times. Victims typically show flu-like symptoms including a fever, chills, muscle aches, nausea and diarrhoea.

Some of the most common foods linked to the infection include unpackaged ready-to-eat meats, a range of cheeses such as brie, camembert and ricotta, raw seafood and pre-packaged or pre-prepared cut fruit and vegetables. However, this doesn’t mean you have to miss out on your favourite foods as the bacteria can be easily killed off with correct cooking methods.

Australians can see the full list of current food recalls across Australia and New Zealand via the government’s food standards website. In addition to the salt and pepper and pastrami, there’s also a recall for The Gluten Free Food Co’s Gluten Free Vegan Mac N Cheez. According to a statement, these products have also been sold at independent grocery stores including IGA and have been recalled because they include an undeclared allergen of milk.

The full list of current recalls can be viewed here.

Do you know someone who has these salt and pepper products?