How to use pantry staples to make delicious and easy meals 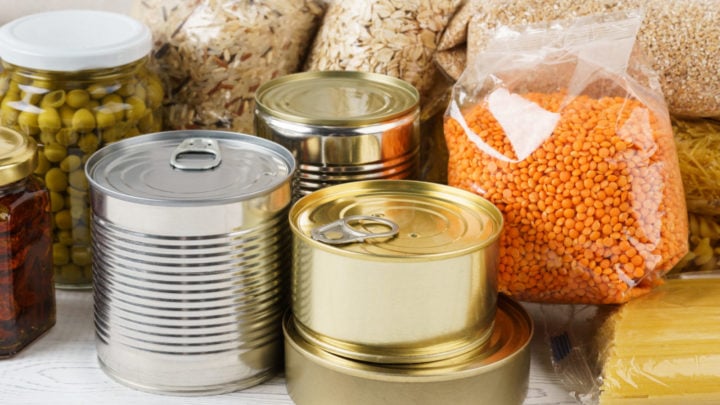 Use the items already in your pantry and fridge to create delicious meals! Source: Getty

The outbreak of coronavirus across the globe has continued to cause widespread panic, with many rushing to the shops to stock up on essentials in case of potential self-isolation. From beans and frozen veggies to rice and pasta, shopping trolleys are being filled to the brim with goods to last at least two-weeks.

While there is no need to go into panic-buying mode and grab dozens of jars or boxes of items, having the essentials in the cupboard is always a good idea. Although you may not be able to make dishes with dozens of ingredients, there are some tasty meals you can whip up with basic items that you likely already have in the kitchen pantry.

Canned goods last a lifetime, and if you’ve got some sitting in the cupboard from months ago, now’s the time for them to come in use. From black beans and pinto beans to kidney beans and black beans, they’re all a great source of protein and keep you feeling fuller for longer.

Use your beans to create dishes such as tacos, minestrone soup and casseroles. All of these meals can be made in bulk as well, so if you’ve got room in the freezer bake a big batch and store it for those days when you can’t be bothered cooking, or if you can’t make it to the shops.

In Australia, supermarkets have put a limit on the purchase of pasta after shoppers cleared shelves amid widespread panic. However, for most Aussies it’s a staple which is always in the cupboard anyway. For a couple, just one large bag of pasta could make as many as eight meals, so plenty to last a potential self-isolation period.

You can use pasta to make traditional spaghetti bolognese with canned tomatoes and sauce, or even a tuna bake with some tinned corn and peas mixed in. The options really are endless.

Stock is the base of many great meals such as soups and stews, so having some in the cupboard is always a good idea. Whether it’s pumpkin soup or a tasty risotto, stock adds a touch of extra flavour to many meals and lasts ages in the pantry. You can purchase it in liquid form or as stock cubes, with the latter taking up barely any room in the cupboard.

While fresh fruit and vegetables are a go-to option, unfortunately they don’t last long in the fridge and by the end of the week could start to look a little worse for wear. Instead try bags of frozen veggies and fruit, such as broccoli, cauliflower and mixed berries.

The frozen vegetables can be used to beef up a pasta or casserole dish, while the fruit is great in a smoothie with coconut water for a healthy breakfast option or afternoon snack.

If you have room in the freezer, pizza is a great option for lunch or dinner. Instead of buying pre-made pizzas, just buy the crust and top with ingredients of your liking, such as tomato sauce, tinned pineapple, mushrooms and bacon bits that can also be stored in the freezer.

What are some meal ideas you have using pantry staples?