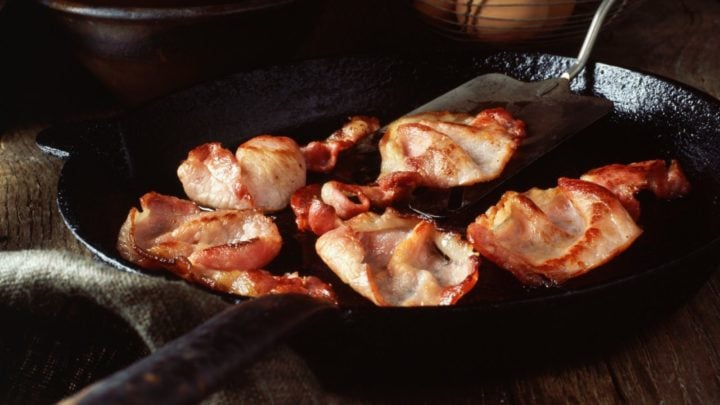 The nation's best bacon producers have been revealed. Source: Getty

A classic rasher of crispy bacon is a crowd-favourite, whether it’s accompanying eggs as part of a cooked breakfast, in a BLT or atop a burger. And now the nation’s best bacon producers have been revealed at Australian Pork’s annual Bacon Awards.

Western Australia came out on top, with Princi Smallgoods, a family-owned business in Perth, taking out the top spot nationally for best full rasher bacon, thanks to its high-quality pork. Meanwhile, Gray’s Modern Meat Mart from Toowoomba, Queensland, was awarded second place, followed by Canberra’s Griffith Butchery in third.

“The story of Princi bacon began over five decades ago and our recipe has travelled from Italy to Australia. What really sets our bacon apart though, I believe, is the quality of the pork that we begin with,” Director Pino Princi told Australian Pork. “Australian bacon is iconic and to be recognised for producing the best in the nation – we’re really proud of that.”

Southlands Quality Meats in the Australian Capital Territory took out first place in the short cut category nationally, followed by Toowoomba’s Westridge Meats in second place, and Loveday’s Quality Meats on the Gold Coast and EurostyleSmallgoods in Perth tying for third place.

L&L Master Butchers in Bentleigh, Victoria, took out first place in the best short cut bacon category in the southern state, followed by Arnold Family Butcher in Boort and Floral Hill Quality Meats. Meanwhile, Peter G Bouchier in Moorabbin was the best when it came to full rasher bacon, with Griffin & Morris Village Butchers in Berwick coming in at second place, followed by Montrose Meats/Smokehouse.

Australian Pork Limited Marketing Communications Manager, Mitch Edwards, said the competition puts a spotlight on producers who are using 100 per cent Australian pork. “Bacon is an Aussie household staple but there’s a high chance the family favourite that shoppers are selecting isn’t made with Australian pork,” he said.

“Many people are surprised to learn that 80 per cent of bacon sold in Australia is made using imported pork. Aussie bacon meets our high safety standards and celebrates fresh, quality, local ingredients.” Edwards continued: “If you want to support Aussie pig farmers, by buying bacon made from 100 per cent Australian pork, look for either the pink Australian Pork logo or make sure the bar chart on the country of origin label has a percentage of over 90 per cent of Australian ingredients.”

Are you a fan of bacon? Do you buy from any of these producers?