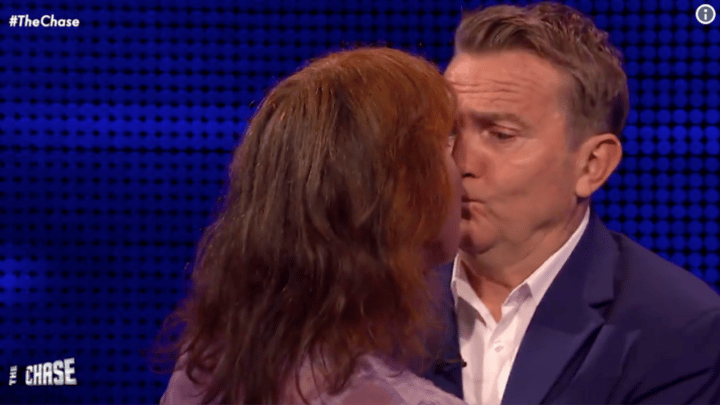 The Chase UK host Bradley Walsh was shocked when a contestant planted a kiss on his lips. Source: Twitter/ The Chase

The Chase host Bradley Walsh was left a little red faced after an excited contestant decided to show him a bit off affection on the UK version of the show.

During an episode which aired this week the much-loved presenter received quite the shock when contestant Kathy planted a kiss on his lips.

The contestant jumped up and down and gave Bradley a big hug before giving him a cheeky peck.

While it’s not uncommon for contestants to show off their excitement at getting one step closer to winning the big bucks Kathy’s bold move left Bradley speechless.

The host stood with a shocked look on his face while Kathy proceeded to squeal with happiness, clearly not phased by the encounter.

According to The Mirror, Bradley tried to usher her quickly back to the desk while he recovered from the surprising moment.

However, the contestant, still amazed to have made it through to the next round, continued to share her excitement explaining how she couldn’t believe she had beaten the chaser.

“Join the club,” a shocked Bradley reportedly exclaimed. To which Anne added: “Yes, that was unusual. Are you alright?”

Equally surprised fans of the show quickly took to social media to share in the shock and hilarity of the situation. Most praised to woman for her bold move and great personality.

“Oh she was absolutely brilliant,” one person wrote on Twitter.

“It was a great show tonight love how nutty Kathy was, that would be so me,” another said.

While a third added: “She’s a living legend, one of my favourite contestants ever.”

The surprising encounter follows news another The Chase star could be following in Anne’s steps by taking part in the British I’m a Celebrity… Get Me Out of Here which is set to be filmed in Australia.

According to an exclusive report from British publication The Sun, Mark Labbett has been approached to appear on the 2019 season of the show as a contestant. Also known as The Beast, Labbett appears on the British, Australian and American versions of The Chaseand is one of the show’s most popular stars.

ITV, the network which airs I’m a Celebrity… Get Me Out of Here in the UK, is yet to confirm the cast and typically makes an announcement days before the show starts filming. The show films on the Gold Coast in November and is one of Britain’s most popular TV programs.

A source confirmed to the publication that Labbett held talks with producers of the show in March.

“Mark’s co-star Anne Hegerty appeared in the jungle last year and was a hit,” the source told The Sun. “Also, Mark going a bit peckish in camp would make great TV.”

Labbett wouldn’t need to make a decision until September and according to the report, has also been approached to appear on the upcoming series of Strictly Come Dancing, which is the UK’s version of Dancing with the Stars. It airs around the same time as I’m A Celebrity.