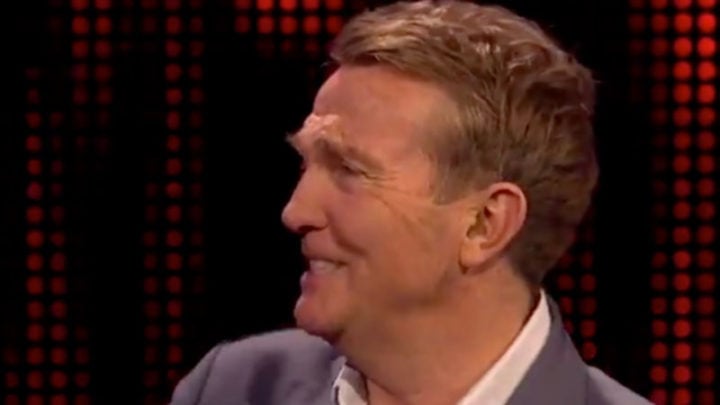 Bradley Walsh is beloved by audiences for his cheeky sense of humour, but his patience was pushed to the limit this week as he was pranked by popular UK presenters Ant McPartlin and Declan Donnelly.

The host of The Chase was filming an episode for an upcoming series when he fell victim to a prank at the hands of the popular presenting duo who targeted Walsh on last night’s episode of their popular variety program Ant and Dec’s Saturday Night Takeaway.

As Walsh recorded his opening lines to camera, however Ant and Dec had other plans and the cheeky duo could be seen slipping on high heels and loudly stomping backstage to disrupt filming.

In his typical style, Bradley took the situation in good humour and shouted out: “What is going on behind there? You transporting sheds back there? It’s like Anton Du Beke back there tap dancing!” However as the pranksters make their way out of the studio, Bradley catches them in the act and Ant and Dec can be seen running from the scene.

We told @antanddec not to wind Bradley Walsh up *too* much, but they really dug their heels in! 🙊 #SaturdayNightTakeaway pic.twitter.com/BRnBGDuKQS

According to the Mirror, Ant and Dec also hired actors to play the contestants to wind Walsh up further and also got Chaser Jenny Ryan involved in the joke and she deliberately tried to infuriate her co-star by getting the name of a contestant wrong.

Footage of the prank was shared on Twitter and fans couldn’t get enough of the footage, with one person writing: “This is the pure TV Gold, I’m in stitches.”

Another said: “Thank you for making me laugh – its been a while – I think you cheered up the nation tonight.” While another commented: “Just watched this weeks. Love a bit of Bradders. Knew it would be good. Well done boys fantastic. You are all what we need at the moment. Stay safe all of you.”

Bradley is known for his infectious laugh and regularly cracks up on screen. During an episode which aired last year, Bradley lost it over a question about 19th century composer William Crotch.

“Nineteenth century composer William Crotch was also famous as a player of what instrument?” the question read, with contestant Roger asked to choose from three options; the oboe, bagpipes or organ.

Giggling uncontrollably, Walsh barely managed to read out all three options before Chaser The Beast and Roger had selected their answers.

The television star then turned to the player and said: “That is absolutely priceless. Oh crikey, that’s funny, eh Rog?”