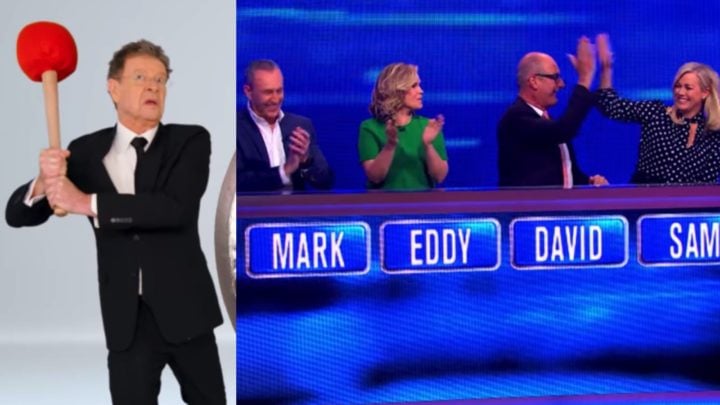 The Chase Australia has treated fans to the first trailer for its highly-anticipated spin-off The Celebrity Chase. The short 30-second video, released online on Saturday, gave fans an exclusive first look at the new show, which is coming soon to Channel Seven, and it looks like a whole lot of fun.

The show sees some of Australia’s biggest stars, such as former Hey Hey It’s Saturday star and radio personality Red Symons and Sunrise host David Koch, battle it out against the show’s regular cast in an attempt to win some money for their charity of choice. Other contestants featured in the video include Australian cricketer Merv Hughes, actress Lucy Durack, Australian singer Ricki-Lee Coulter and journalists Sam Armytage, Mark Beretta and Edwina Bartholomew from Sunrise.

While the footage doesn’t feature all of the usual chasers, such as Brydon Coverdale (The Shark), Mark Parkinson (Goliath), Issa Shultz (The Supernerd), Mark Labbett (The Beast) or Shaun Wallace (The Destroyer), Anne Hegerty (The Governess), who’s known for being one of the toughest challengers on the show, can be heard saying “oh, this will be fun”.

Anne has been one of the most popular chasers on the show to date, both among fans and competitors who hope to take on the talented quiz master and win some cash. She first made her claim to fame as one of the chasers on the original UK version of the show before making her way Down Under to battle it out against Aussies.

The trailer has been a hit with fans who were quick to comment, revealing their excitement and anticipation to watch the show in the coming months, with one commentator writing: “Keen to watch this.” Another added: “OH BOY!!! WE CAN’T WAIT!!!” while a third wrote: “Looking forward to this.”

Meanwhile, it comes The Chase Australia host Andrew O’Keefe gave a rare glimpse behind the scenes at what happens when it all goes wrong. There have been some hilarious moments on the Channel Seven quiz show, with rude words, jaw-dropping mistakes and some tense show-downs – but it seems we haven’t seen half of the on-air blunders.

Speaking in an exclusive chat with Starts at 60 last year, O’Keefe said his favourite moments during filming are when a contestant makes a mistake, or he’s confronted with a funny question or rude answer he’s not anticipating.

“The stand-out moments for us are when things don’t go according to plan, it’s always a lot of fun,” he said. “For example some of the great contestant answers we’ll never forget. You have to stop to have a little giggle, and I don’t always keep a straight face. One or two time I’ve had to stop the clock because I’m just convulsing with laughter.

While O’Keefe has power to stop the clock himself, he admitted he likes to run with the mistakes as much as possible – well aware of how they’ll come across to the viewers at home. However, if one appears to get out of hand – which he says has happened in the past – the producers will cut him off.

“More often the director will get in my ear and stop it for me because I like to run with it when things go wrong, but that can take you down a rabbit hole of things that should never appear on prime time TV!” he joked.

“We had one the other day, we asked which particular philosopher had a particular wife who was known for being cranky. Of the three options, one was the German philosopher that in English we call ‘Cant’. Of course, it’s not actually pronounced Cant, it’s real pronunciation wouldn’t make the censorship rules of 5.30. Of course, I pronounced it like that and the contestant said ‘no wonder his wife was so cranky’. I got the wind up pretty quickly on that one!”

Are you looking forward to seeing Red Symons and David Kochie on The Celebrity Chase? Do you watch The Chase Australia?