‘I’m not in pain’: Studio 10’s Jono Coleman reveals his cancer has spread 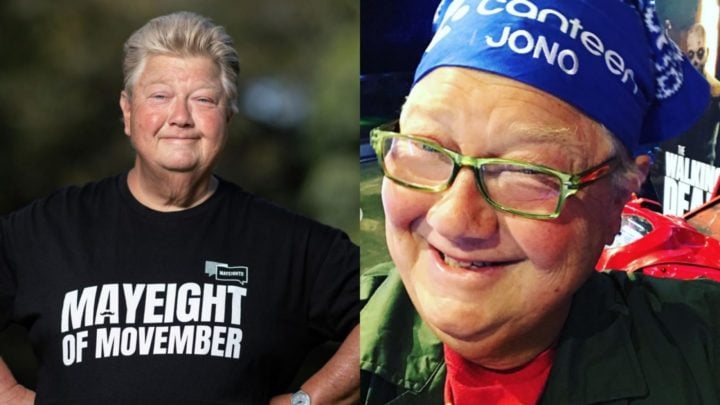 Jono Coleman is focusing on a healthy lifestyle after discovering his cancer had returned. Source: Instagram/Jono Coleman (left: James Gourley).

Studio 10 star Jono Coleman has revealed his cancer has spread to his lower back and shoulder, more than a year after telling viewers on air that he had gone into remission.

But the TV star has insisted to Starts at 60 that he’s feeling great and is focusing on his treatments, transforming his lifestyle and continuing his incredible weight loss – after shedding 22kg in recent months. He now hopes to continue spreading the word about cancer ahead of Movember.

“They’ve [found] a few bits in my lower back and a little bit on my shoulder,” he said. “But it’s all treatable. I found out a few months ago so I’m already having extra treatment.

“I feel great. I’m not in any pain, other than old age! I’ve been really healthy with food and exercise recently and I’ve lost 22kg – taking me just under 100kg.”

Jono has been focusing on a healthier diet, cutting out carbs and sugar wherever he can. He also tries to exercise in the park or pool every day, determined to shed even more pounds as he continues his treatments and raises awareness of Movember. The campaign runs every year, encouraging men to grow a moustache to raise money and awareness for prostate and testicular cancer.

The 63-year-old TV star first left his Studio 10 co-stars in tears in July last year when he revealed he had been diagnosed with prostate cancer the year before – but chose to keep it to himself at the time so he could continue working. He underwent courses of radiotherapy and chemotherapy shorty after his initial diagnosis, before finally going into remission in time for Christmas in 2017.

Speaking to Starts at 60 in December last year, Jono opened up on the extensive treatments he was continuing to have to try and stop it returning. They included a hormone injection in the stomach, “which stops any potential cancers from coming back”, as well as a daily capsule tablet which he said was a “new American drug” that worked like the jab to stop cancer cells forming again.

Jono only initially found out his diagnosis following a routine check-up with his GP, who discovered the cancer had spread to his lymph nodes, spine and bones.

“Complacency can creep in,” he said at the time. “We all think we’re perfect creatures and nothing’s going to happen to us, but when you get over 50 or 60 like me, you have to have those check-ups. You don’t have to be obsessed by it, just aware.”

He previously shared his powerful New Year’s resolution for 2019 with Starts at 60, after being inspired by his friend and colleague Barry DuBois, who is still bravely battling cancer himself.

“I think my resolution is to have lots of fun times with my family and all just enjoy the time we have, however long that is in the eyes of the big guy up in the sky,” he said at the end of 2018. “My resolution is just to enjoy every day as it comes, like Baz DuBois does.

“Like millions of other Australians do, like people who are suffering from disease… You live on and there’s always someone else who’s got it a lot worse than you have.”

Are you a fan of Jono Coleman? Do you have a message for him?