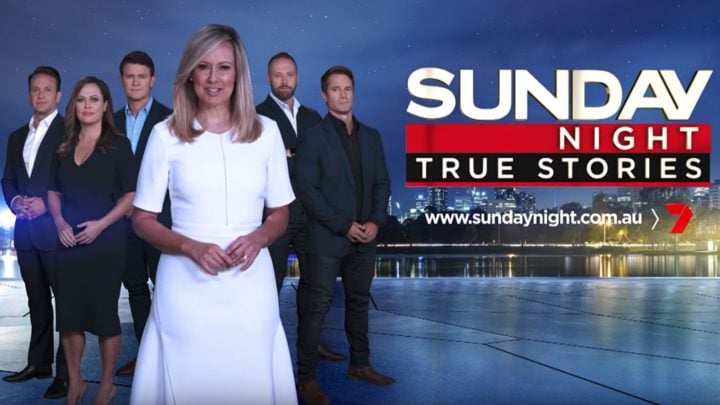 The Seven Network have been forced to axe flagship news and current affairs program Sunday Night after 11 years on screen, admitting the “tough” decision came amid a battle with a “challenging TV landscape”.

The weekly show, headed up by Melissa Doyle, came as part of a major restructure by Seven West Media chief executive James Warburton. While the program is set to end next year, it will continue to air until the end of this year.

Seven Network Director of News and Public Affairs Craig McPherson said in a statement to Starts at 60: “After 11 years at the forefront of our Public Affairs offering it is with much sadness I announce the closing down of the day to day operations of Sunday Night: True Stories. It has been a very tough decision in a very challenging TV landscape.

“I want to thank the exceptional team of reporters; producers; camera operators; editors and many others who have helped produce more than 500 hours of quality public affairs programming over its lifetime. The program itself will remain on-air until the end of the year. A small production team will stay on to produce existing product over this time. I wish all those leaving us nothing but the best for the future.”

The overhaul comes just six weeks after Warburton was appointed to replace Tim Worner. According to reports, he sent a memo to staff on Wednesday morning revealing he now hopes to refocus Seven on “content led growth” – with hopes the changes will “transform the business into a leaner and more agile company”, Mumbrella reports.

He added to the media company that he now hopes to target a younger audience, adding: “We have had to make some tough decisions in order to build the network for the future. I take very seriously any decision that impacts our people and I am grateful for the loyalty and commitment shown by our team over many years. Anyone impacted by changes will have dedicated support and respect throughout the process of transition.”

Sunday Night has previously been hosted by everyone from Mike Munro to Chris Bath. Meanwhile, reporters past and present for the show include Rahni Sadler, Alex Cullen, Mike Willesee, Molly Meldrum and Denham Hitchcock.

Munro himself previously spoke to Starts at 60, calling for a move to more classic current affairs shows – like Sunday Night when he hosted it – and away from reality TV, which he branded “morally corrupt”. Munro has enjoyed decades on Australian screens, taking lead roles in everything from A Current Affair and 60 Minutes, to Nine News and Sunday Night itself – all some of the biggest news and current affairs programs on screen.

“I became very disillusioned with it all, I said ‘I don’t cook, sing, dance, I don’t want to be married to someone I’ve never met before, I can’t hit a nail’, so I was prepared to walk away,” he admitted in an exclusive chat. Munro now thinks there’s too many reality TV shows and not enough hard-hitting shows.

He added: “I do also think there are too many of these reality shows, and I think a lot of them are morally corrupt. Marrying someone you’ve never seen before, or the last resort having a couple who want to be on TV but also want to save their marriage. Even the cooking shows have gone confrontational and aggressive. I hardly watch any free to air anymore.”

Meanwhile, A Country Practice and Home and Away star Shane Withington admitted it’s a shame that dramas and current affairs shows are now being overshadowed by reality TV – even describing it as a “TV crisis”. “The industry has changed dramatically”, he explained. “There is a lot more reality TV which I think is a deep shame.”

Are you a fan of Sunday Night? Are you sad to see it go?