‘Should we bring Karl back?’ Pauline Hanson roasts Deb Knight over ratings slump 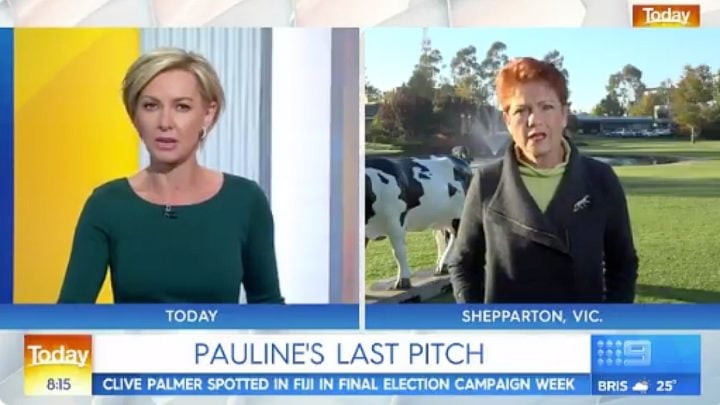 One Nation leader Pauline Hanson has taken the ultimate swipe at Today show host Deb Knight in a fiery interview on air, appearing to blame her for the recent ratings slump and even questioning if they should bring back Karl Stefanovic.

Speaking on Thursday morning’s episode about the upcoming election, the politician hit out at Knight for one of her questions about One Nation’s declining support – turning the question round completely and blaming the presenter for the drop in ratings.

In the chat on the Channel Nine program, Knight queried Hanson on the latest Newspoll results which position One Nation lower than it previously was in earlier stages of campaigning.

“The latest Newspoll, it shows support for One Nation collapsing to four per cent, on par with Clive Palmer’s party,” the host said. “In light of all the things you’ve faced, all the scandals, all the things that have been going on, can you really blame people for having their doubts about One Nation and considering Clive over you?”

Rather than answering the question, the Queensland senator took offence to the comments and lashed out at Knight for apparently “having a go” at her.

A shocked Knight was obviously taken aback by the response and quickly tried to explain that she was simply asking the questions that most journalists would feel necessary.

“I’m not having a go at you personally Pauline, it’s my job to ask you [these] questions,” the host replied. “I’m putting facts to you that that is what the Newspoll is showing, and obviously the polls have been wrong in the past, which is what you are indicating.”

It has been a rocky road for the politician over the past few weeks with One Nation senate hopeful Steve Dickson resigning from his position after footage of the married politician touching women, stuffing dollar bills between their breasts and uttering a stream of lewd comments was broadcast on Channel Nine’s A Current Affair program.

In the footage, Dickson can be seen putting notes into the bra and underwear of one dancer who joins him at a table, before telling the women to touch his genitals. He can also be seen approaching her as she performs on stage, once again putting more dollar bills in her underwear.

Following the shock release of footage to the public, a series of lewd social media posts were discovered on another candidate’s social media page.

The shocking photos were reportedly published on hopeful Ross Macdonald’s Facebook page – he is running for the Queensland seat of Leichhardt – and show the candidate touching a woman’s breasts along with a number of digitally altered images of a sexual nature, published initially by News Corp.

While the disturbing images have since been deleted from Macdonald’s account, a selection of the photos were shared online by shocked members of the public, including one post which described him as having “no respect for women”.

The Twitter post included a montage of images said to have been shared by Macdonald, including an image of a woman, with prominent nipples, wearing a shirt which reads “save a virgin, do me instead”.  While another features a digitally altered image of a naked woman resembling a centaur, alongside the caption: “MMMM!!!… Interesting thoughts.”

According to the Cairn’s Post, which broke the story on Tuesday, there were further sexually suggestive photos on Macdonald’s page including one which allegedly showed him holding up raffle tickets in front of a topless woman.

Are you a fan of Pauline Hanson? What do you think of her comments? Do you watch the Today show?